Just before dawn in January 2018, 27 barges were floating like a net along the banks of the Ohio River, downstream of the city of Pittsburgh. Instead of fish, the fleet caught chunks of ice that broke off in the warming, fast-moving waters as it waited for a tow through the nearby Emsworth Locks and Dams.

The area had experienced record rainfall, and the river rose more than 12 feet in about 30 hours. The barges, some loaded with coal and cement, were lashed together with steel cables in a grid-like pattern, then secured to pilings equipped with large metal mooring rings.

Crews had worked through the night to monitor the cable tension as ice and rising waters caused the lines to tighten. At 6:15 a.m., a towing vessel captain saw sparks.

His vessel and all of the 27 barges began drifting downstream, propelled by the fast current and extreme weight of ice. Unable to control the barges, the towing vessels saved two and let the rest go.

In the first light of day, they reached the Locks and Dams and met their fate. Seven flowed through the open lock gate. Three hit the dams and sank, taking their cargo with them. The rest grounded on the banks of the river or lodged themselves between the dams and the raging river.

As is typical with marine accidents, no single factor can be blamed. But federal investigators determined the problem that pushed everything over the edge was the weather. The same day, just south of Wheeling, West Virginia, another 27 barges set loose on the Ohio River due to increased rainfall and ice buildup.

Over the past decade in the Ohio watershed, which encompasses 15 states from southwestern New York to the northeast corner of Mississippi, extreme weather has been cited more and more frequently as a contributing cause in serious marine accidents. At the same time, a KyCIR analysis found that shipping of hazardous materials like crude oil and kerosene are rising. These issues have ramifications all along the Ohio River, but particularly in Louisville, home to one of the most difficult passages to navigate. As the conditions on the Ohio — and its cargo — become more hazardous, key regulatory organizations struggle to keep up with the growing demands of this water highway.

Inland marine accidents don’t attract as much publicity as accidents on the oceans. Generally, inland vessels are much smaller, and fewer deaths result from single incidents.

But navigating inland waterways can still be a treacherous endeavour, made more hazardous when the river is high. A 2017 U.S. Army Corps of Engineers’ report estimates that up to 50% more water could be coursing through the Ohio River watershed within this century due to climate change.

The river’s rise obscures river banks and changes river beds. It creates currents that can pull vessels off course, or throw debris into mariners’ paths.

KyCIR analyzed federal data from 2010 to 2018 on serious marine accidents, which the U.S. Coast Guard defines as incidents involving death or serious injury, excessive property damage or a discharge of hazardous materials. 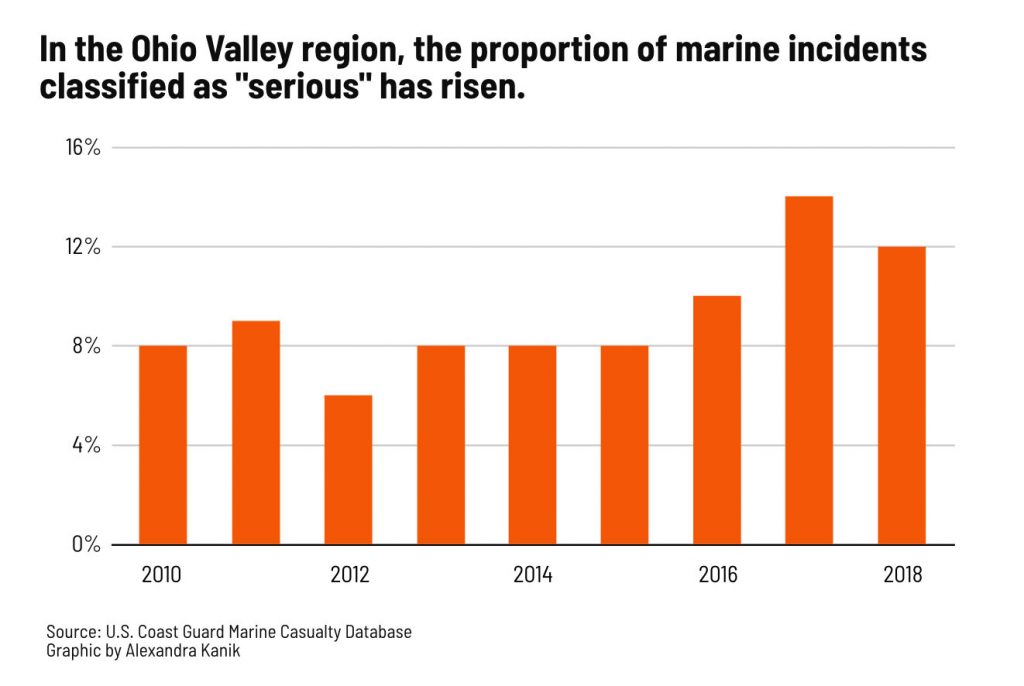 Incidents citing high waters as a contributing factor are on the rise, data show.

Coast Guard serious incident reports from 2010 to 2015 occasionally cited “high waters” or “fast-moving currents” as contributing factors to the accidents. But these terms began to show up more frequently in accident descriptions starting in 2016, data show.

In one 2018 incident near Louisville, barges loaded with crude oil condensate got stuck on the river bank. The pilot struggled to avoid being overtaken by strong currents.

Liam LaRue, chief of investigations for the Office of Marine Safety at the National Transportation Safety Board [NTSB], said the agency has noticed more and more accidents tied to high rivers.

“We’d get a few accidents a week, and they were all just high-water related,” LaRue said. “That’s definitely something that we’ve seen a lot of.”

NTSB only investigates “major” marine accidents, which involves six or more fatalities, $500,000 of damage or the total loss of a vessel.

LaRue has been with NTSB for 14 years, and he said their normal annual workload is between 30 and 40 major cases nationwide. Last year was a record year for his team, he said: they investigated 52 major marine accidents. Most happened on oceanic routes or at coastal shipping ports. But inland accidents like the Emsworth barge breakaway outside of Pittsburgh make the list because of the costly property damage they leave in their wake.

And these accidents are not uncommon in the Ohio watershed, in part because the Ohio River is so difficult to navigate. 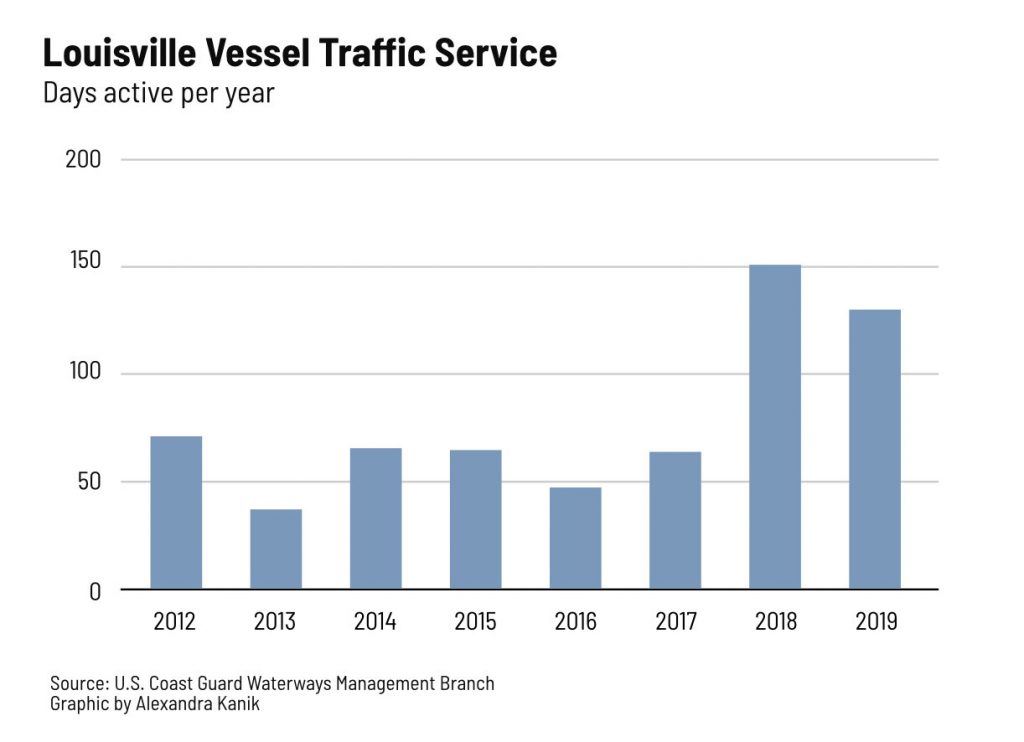 Louisville’s section of the Ohio River is one of only 12 places in the country with a Vessel Traffic Service — essentially an escort system to help vessels navigate dangerous or congested stretches of river. It is the only inland traffic service and the only one that operates solely during times of high water.

Louisville’s service was established in 1973 after a series of accidents, such as the February 1972 incident when a barge carrying chlorine gas became lodged in the McAlpine dam, threatening lives and requiring the evacuation of the nearby Portland neighborhood.

Between 2012 and 2016, Louisville’s traffic service was activated for an average of 59 days a year. In the last two years, it was active for 151 days and 130 days, respectively.

More than 180 million tons of cargo travel up and down the rivers of the Ohio watershed each year, according to a KyCIR analysis of commodities data from the U.S. Corps of Engineers. The river carries shipments of food, alcohol, fuel, construction supplies and even rocket parts.

More and more, those cargo vessels are carrying non-solid fuels.

This trend follows the decline of coal and the increase in natural gas production in this region. Less coal is being mined as more companies go bankrupt and coal becomes harder to extract. Power plants are retiring coal generators in favor of natural gas units, which are not only cheaper but cleaner. 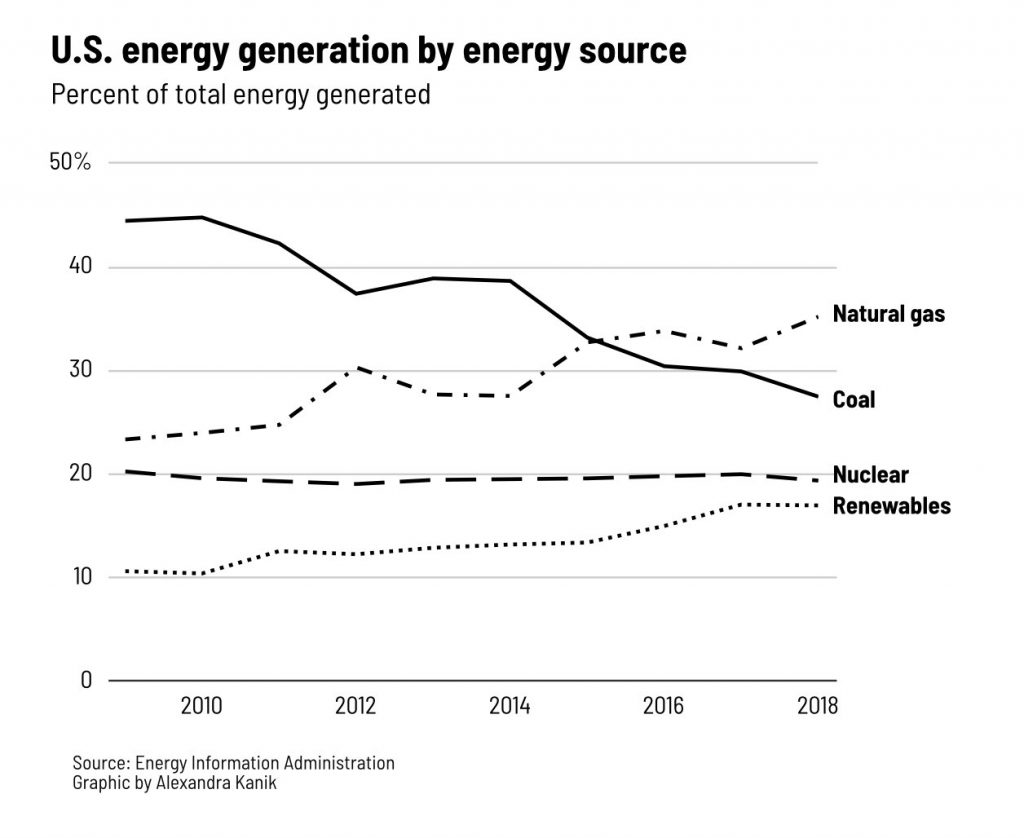 But the non-solid materials taking their place are more hazardous to ship. When a coal barge sinks, it generally stays in one place, said Sam Dinkins, a technical programs manager at the Ohio River Valley Water and Sanitation Commission, an interstate water quality agency known as ORSANCO. But when an oil or liquid hazardous material spills, things get messier, faster.

“Containment of that release becomes problematic because it’s going to flow with the river downstream,” Dinkins said. “And so it spreads out, along with the river flow.”

In many cases, the liquid can change the composition and quality of the water — water that residents in the watershed ultimately drink.

The Louisville water supply faced a potential disaster in December 2017. A barge holding more than 300,000 gallons of liquid fertilizer broke in half just south of Cincinnati, Ohio, threatening the city’s water supply downstream.

This particular spill wasn’t due to high water, but it illustrates the potential for danger. As thousands of gallons of urea ammonium nitrate drifted downriver toward Louisville, the city’s water authority took action.

“This spill was unique because it wasn’t like an oil spill where you could see it on the river,” Louisville Water Company spokeswoman Kelley Dearing Smith told WFPL in 2017. “The chemical was soluble, so our scientists really had to track the spill … to understand how this plume was moving.”

In this case, rain diluted the contamination, and helped it move swiftly through the city. But less than a month later, the rain would cause the barge breakaways near Pittsburgh and in West Virginia.

These inland spills may seem less catastrophic than ocean spills, but they’re more likely to cause harm to the surrounding area, said Lt. Cmdr. Takila Powell, U.S. Coast Guard marine investigations supervisor for the district that includes most of the Ohio watershed.

When you have an oil spill on an inland river, Powell said, water is more shallow and the currents are different than on the ocean. It takes a lot less oil to pose a big threat.

“And plus, there’s a higher chance of impact to the shoreline because you’re on a river and there’s two banks on either side,” Powell said. “So at least one could potentially be impacted.”

Government agencies and regulatory bodies say they are working together to improve safety and mitigate harm after accidents occur. But change is slow to come.

But as each year brings more volatile weather than the year before, the agencies say they’re trying to be proactive, rather than reactive.

Only recently did the NTSB begin documenting its accident investigations with an internal database. LaRue said the effort will help provide a “better idea about trending and things like that, and hopefully spot safety issues.”

Such a database, when implemented, could help NTSB create a recommendation report on how to avoid weather-related incidents in the future, but the NTSB still lacks enforcement power. Even if its investigators identify safety protocols that could help mariners deal with extreme weather, it would be up to the Coast Guard to implement them.

Currently, the Coast Guard maintains and operates regional plans that help mariners respond to hazards such as high water or inclement weather on specific stretches of river.

Those forecasts are available for mariners from the National Oceanic Atmospheric Association [NOAA], which uses various data points about rainfall and terrain to predict how waterways will react to extreme weather up to 10 days ahead of time.

“That gives them the opportunity to make decisions that are going to help them navigate the rivers safely if the water is coming up quickly,” said Trent Schade, hydrologist in charge of NOAA’s Ohio River Forecast Center. “They have an opportunity to move their boat into a safe harbor.”

But these forecasts give only a short lead on the future of the river. Both the Coast Guard and NOAA say they aren’t focused right now on climate change’s long-term impacts on river safety. When it comes to next year or the next 10 years, the state of the water is much murkier.

Alexandra Kanik is the data reporter for Kentucky Center for Investigative Reporting which is part of Louisville Public Media. She can be reached at akanik@louisvillepublicmedia.org or on Twitter @act_rational.

Caitlin McGlade contributed to this report.

Good River: Stories of the Ohio is a series about the environment, economy, and culture of the Ohio River watershed, produced by seven nonprofit newsrooms. To see more, please visit ohiowatershed.org.

State Awarded More Than $500K For Marine Patrols In Ohio