“We Believe In Dinosaurs” Explores Ark Encounter in Williamstown, KY, on INDEPENDENT LENS | Monday, February 17 at 10

We Believe In Dinosaurs on INDEPENDENT LENS Premiers Monday, February 17 at 10 pm 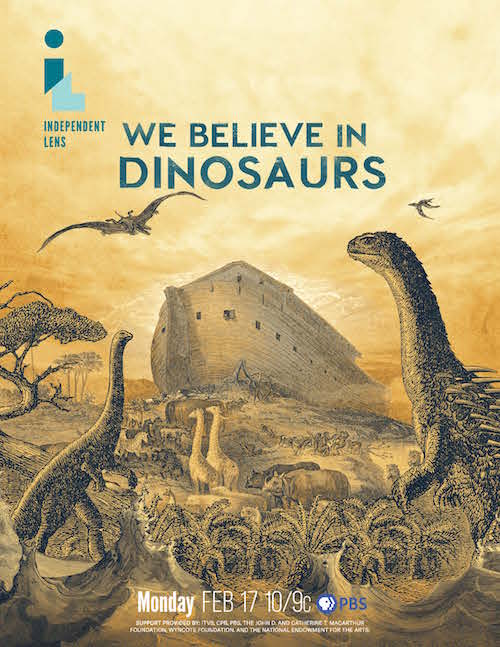 Learn about the building of a $120 million Noah’s Ark exhibit, backed by the Creation Museum in Williamstown, Kentucky, and designed to prove the Bible is historically and scientifically accurate, and hear from residents who support and oppose it.

Built to demonstrate the truth of the Bible story and to disprove evolution, an enormous “life-size” wooden ark takes shape in rural Williamstown.

Doug Henderson and his talented sculpture team labor for months, sometimes around the clock, creating lifelike animals for the exhibit. Among their creations are dinosaurs, which they believe sailed with Noah and his family. “They probably took juveniles,” he says, explaining how the enormous animals would have fit on the boat. “A young Stegosaurus was only about … this big.” To Doug it doesn’t matter that mainstream science puts the age of the Earth at 4.5 billion years. “Creation scientists” at the museum (several with Ph.Ds) maintain that the Bible is the inerrant word of God and that evolution is the work of atheists. Doug believes them.

​The creationists’ vision disturbs Dan Phelps, a Kentucky state geologist. For years, Dan has fought against the Creation Museum’s “non-science” through op-eds and letters to the editor. When he discovers the Ark Encounter will receive tax incentives despite discriminatory hiring practices, he ramps up his fight. A local Baptist minister also protests the incentives, intensifying the struggle over the American principle of the separation of church and state.

​David MacMillan, a 26-year old former creationist, has a different perspective on the Ark Encounter. A charter member of the Creation Museum in his youth, he now writes articles and blog posts that explain the creationist mindset. He hopes to help creationists hear a different message: evolution is not the work of the devil, and creationism is not the only way to understand the world.

​Shot over the course of four years, We Believe in Dinosaurs follows the Ark Encounter from its groundbreaking to its opening day; from the designing and building of the Ark, to growing protests from scientists, Freethinkers, and even a Kentucky pastor. By telling the fascinating story of the Ark Encounter, We Believe in Dinosaurs also tells the story of the unsettling and uniquely American battle between science and religion.

We Believe In Dinosaurs | INDEPENDENT LENS | Coming Monday at 10