FRONTLINE Examines “Amazon Empire: The Rise and Reign of Jeff Bezos” February 18 at 9

Amazon Empire: The Rise and Reign of Jeff Bezos

Amazon’s Jeff Bezos built a business dynasty that is unprecedented in the history of American capitalism — delivering endless products, entertainment services and technology innovations to customers with just a click of a button.

But what is the cost of Amazon’s convenience? 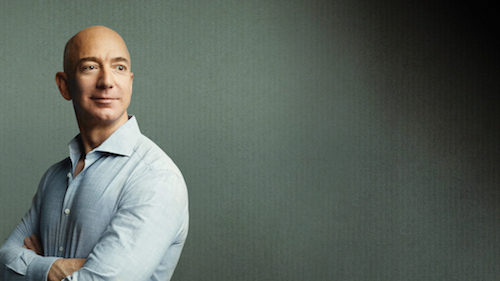 FRONTLINE will examine Amazon and Jeff Bezos’ ascent to power — and his ability to shape everything from the future of work, to the future of commerce, to the future of technology — in Amazon Empire: The Rise and Reign of Jeff Bezos. The two-hour special premieres Tuesday, February 18 at 9 on WOUB, on the PBS Video App and PBS.org/frontline.

From award-winning filmmakers James Jacoby and Anya Bourg (The Facebook Dilemma, War on the EPA, Policing the Police) the documentary draws on interviews with current top executives, former insiders, as well as regulators and critics, raising critical questions about Bezos and the empire he built.

Through these interviews, Jacoby and Bourg’s investigation presents an inside look at who Bezos is, and how he transformed a tiny company run out of a garage into a staple of American consumerism that critics contend is willing to dominate the market at all costs.

“I would say that Jeff Bezos is probably the most important longer-term thinker alive,” quantitative futurist and author Amy Webb tells FRONTLINE. “There’s no question in my mind that in 2005 Bezos had some sense of what the next 30-40 years were going to look like and that Amazon was not simply gonna be an ecommerce platform, but an invisible infrastructure that powers our everyday lives.”

“You just go and go and go and if you’re not keeping up with your rate, they correct it rapidly,” says Sheheryar Kaoosji, executive director of Warehouse Worker Resource Center.  “They surveil and watch you working every moment of the day. These workers are being watched on a level that I don’t think people understand.”

As politicians and regulators around the world start to consider the global impact and threat of Amazon – and how to rein in the power of the richest man in the world – FRONTLINE investigates how he executed a plan to build one of the most influential economic and cultural forces in the world and the real-world disruption that continues to cause.

“Ultimately this is a product of choices that we as a society, our government made and that is what we have to contend with,” says Stacy Mitchell, journalist and co-director of the Institute for Local Self-Reliance. “Having an economy in which power is concentrated in a few hands is very much incompatible with democracy.”

Amazon Empire: The Rise and Reign of Jeff Bezos | FRONTLINE | Tonight at 9

Amazon Empire: The Rise and Reign of Jeff Bezos | FRONTLINE | Tonight at 9

Amazon Empire: The Rise and Reign of Jeff Bezos | FRONTLINE | Coming Tuesday at 9