Click here for a quick week-at-a-glance view of new television content that starts Monday, 3/30 to meet the needs of students at home. #LearnAtHome

Tammy’s struggle with substance use started with pain pills she found in her grandmother’s cabinet. Then it escalated to heroin.

“It’s a full time job,” she says. “Most people think that’s not a full time job but it is. When you’re addicted to anything, then you’re working at it every day. Trying to make sure you don’t run out.”

WOSU is not using Tammy’s last name to protect her privacy and her job.

Her silver hair is pulled back into a pony tail. She pushes her glasses on top of her head as she remembers all the times she sought help and then relapsed. That changed when she was prescribed suboxone as part of a medication assisted treatment program at Maryhaven in Columbus.

Medication assisted treatment (MAT) is the use of medication in combination with counseling to help sustain recovery and prevent overdoses.

“I’ve been on it five years, seven months and six days,” Tammy says. “I think it’s just a life saver to people. I understand people are still wanting to know why a drug to take us off a drug. I don’t know why, but it’s what works. I do know that.”

MAT is scientifically proven to help those suffering from opioid addiction – but only 55% of all rehabilitation facilities in Ohio offer it, according to data from the Substance Abuse and Mental Health Services Administration. 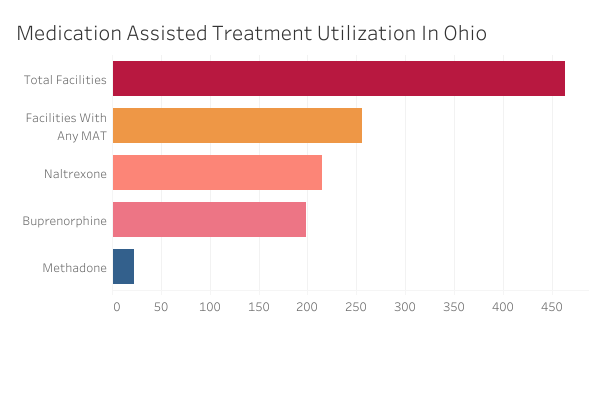 “The statistics are very clear. Medication assisted therapies work. It saves lives. And we cannot afford not to do this,” says Mike Gersz, director of medically assisted services at Maryhaven.

There are three medications used in MAT: naltrexone, which is an opioid blocker, and buprenorphine and methadone, which are both opioids.

Buprenorphine and methadone both activate the same receptors in the brain that other opioids would, stopping withdrawals and cravings. But when taken as prescribed, they don’t provide any feelings of euphoria. That stabilization gives people space to work on the root causes of their addiction.

Despite that, Gersz says misconceptions about buprenorphine and methadone are a large reason only half the treatment facilities in Ohio use them. He says critics chalk the process up to “replacing a drug with a drug.”

“We should not be in the business of restricting medication for our own values or for what we feel recovery should be,” Gersz says. “My hope is someday medication assisted therapy can be provided in all treatment centers, including House of Hope.”

House of Hope is one of the oldest rehabilitation programs in Franklin County. Their program is largely abstinence based.

“Eighty percent of our guys stay sober for their first year,” says Richard Mason, the recovery housing coordinator for House Of Hope. “That’s without MATs. So why would we add medication to that? Those outcomes are some of the best outcomes in the state. So if it’s not broke, why fix it?”

After pressure from the community, one House of Hope program now offers naltrexone. Mason says it’s not as successful as the abstinence-based program, and adds they have no plans to offer the other two medications.

Methadone and buprenorphine are less expensive and better researched than naltrexone, but Mason says he has seen them abused.

House of Hope isn’t the only one – Ohio’s prison system and most jails prefer naltrexone over methadone and buprenorphine.

“We view all three forms of MAT as equally valid,” says Richard Massatti, chief of the Bureau of Substance Use Disorder Treatment at the Ohio Department of Mental Health and Addiction Services.

He says his department wants to see MAT more widely embraced, but doesn’t believe requiring MAT is the way to get there.

“Just because we at the state say, ‘You must do this,’ doesn’t mean that people at the ground level are going to do that,” Massatti says.

He points to stigma as part of why treatment centers only offer one form of MAT, if they offer it at all.

“It just shows that there is a lot that we need to do as a state to address the opioid epidemic, to address peoples understanding of science, and what really can help people recover,” Massatti says.

Regardless of that stigma, he says about 90,000 Ohioans use MAT in a given year, and that number is growing.