Not many could have anticipated such a one-sided game as that between the Trimble Tomcats and the the South Webster Jeeps Thursday night.

The Tomcats out hustled, out rebounded, and out shot the Jeeps on their way to a 68 to 38 victory –  the 3rd seeded Tomcats odds-on favorites.

A slower pace prevailed through the first half. Both teams moved  the ball well and turnovers were scarce. However, it did not take long for Trimble make their impact. By halftime the Tomcats had soared to a 20-point lead. 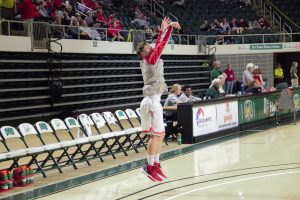 The game sped up significantly in the second half. As a result, the game became a little more sloppy. Turnovers for both teams rose. Trimble continued their dominance, heading into the fourth quarter with a 58 to 29 lead.

This was not a game won because one team out shot the other. South Webster’s 35.7% shooting was not far off of Trimble’s 39.7%. The stat that stood out was the discrepancy is total shot attempts with Trimble putting up 31 more shots than their opponent. They were able to accomplish this thanks to an incredible rebounding effort. The Tomcats had 42 rebounds. Trimble’s Zach Guffey led the game with 14 boards. Also, five different Trimble players had over five rebounds.

The 30-point rout came easy thanks to the fantastic scoring output of two Trimble players: Seniors Brayden Weber and Zach Guffey both put up over 20 points. While their performances were spectacular, they got the job done in very different ways. The sharpshooting Weber was red hot from behind the arc shooting four for six from three-point range, which is where he netted 12 of his 22 points. By contrast, Guffey did not make a single deep shot getting his points the old-fashioned way. His offensive rebounds led to a lot of second-chance buckets. He also flashed an impressive mid-range jumper that helped him score 21. His glass-cleaning effort gave him a double-double. The duo accounted for over 63% of Trimble’s offense.

Trimble continues on the road to their seventh Southeast District Championship against 7th seed Fairfield for the District Final. The game will be in the Convocation Center on Saturday March 7th at 9 p.m. Trimble will again be the favored team.