ATHENS, OH – It’s the first day of spring and in Angie Massie’s world that is a really big deal. The former WOUB student and 1999 Honors Tutorial College graduate of Ohio University is the vice president of live storytelling and interim head of marketing at The Weather Channel.

“The amazing thing about working at The Weather Channel is every day when you come into work there is one goal: to protect and save lives,” said Massie. “And that just doesn’t happen anywhere else. When a big weather event happens in America, people come to The Weather Channel.”

Even when the big event is not weather related, people still tune into The Weather Channel for the science of what is happening. The latest example is the recent Coronavirus outbreak (COVID-19). 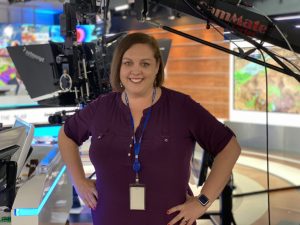 “We help separate fact from fiction,” said Massie. “What are temperatures, the sun and ultraviolet rays doing to kill the virus? Or another example is that we had a windy day recently in the northeast. With the reduction in passenger loads on airplanes because of the Coronavirus, there was less weight on the planes. We explained how the planes were more receptive to turbulence. At The Weather Channel, we do science 24/7 and 365 days a year.”

One of the biggest parts of Massie’s job is to plan and coordinate live coverage of changing weather situations. She is very involved in the decision making of how to staff and cover live weather events and even where to send Meteorologist Jim Cantore for live coverage.

“I work very closely with our vice president of news gathering who is responsible for field crews, and we collaborate to determine where we need to put our resources. We also decide if it is safe to send a reporter or anchor to a particular region,” said Massie. “There is a lot of planning that goes into storm coverage.”

Massie credits her ability to do this job well to the experience she got working at WOUB.

“I remember in April of 1999 and the Columbine High School mass shooting happened,” said Massie. “We talked about our local coverage, and I remember standing in the newsroom at WOUB and looking around. We all realized we weren’t that much older than the students at that high school, and we all knew these were the types of stories we were going to have to react to and cover in this industry.”

As a student, Massie also worked as an intern at NBC’s Today Show and enjoyed working in the national network news environment. But while she was finishing her degree, Massie got a job in local television news as a producer at WSAZ in Charleston-Huntington, West Virginia. She worked there for four years before getting a job at CNN in Atlanta to get back into national news.

Massie worked her way up to executive producer at CNN but lost her job as part of a mass layoff.

“I happened to know people at The Weather Channel and was able to land an opening they had over here,” said Massie. “Not long after I started, The Weather Channel launched a new morning show with Sam Champion, and I was promoted to senior executive producer for that program. After an ownership change, I was later promoted to vice president.”

Massie says she wouldn’t be where she is today without the solid foundation and professional learning experience she got while at WOUB.

“I felt like I was more prepared walking into a real commercial newsroom because I had already experienced that cold sweat of having to meet a deadline for a live broadcast,” said Massie. “Having the experience of knowing my story wasn’t going to be finished in time taught me so much. It was trial by live fire, and that gave me the experience I needed.”