March Madness Turns into March Sadness for Bars and Restaurants 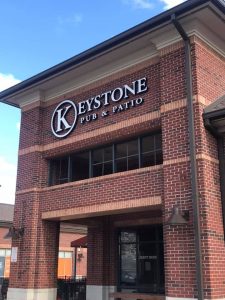 COLUMBUS, Ohio —  This time in March is usually when restaurants, bars and basketball fans across the nation prepare for one of their most favorite times of the year… March Madness. But this year, restaurants and bars are taking a major loss in business. And instead of large crowds, tables and chairs are empty at Keystone Pub & Patio.

This is because Keystone was forced to close their doors  for business last Monday as part of the state’s mandatory closure of restaurants and bars. This mandatory closure is Gov. Mike DeWine’s attempt to enforce social distancing throughout this pandemic. 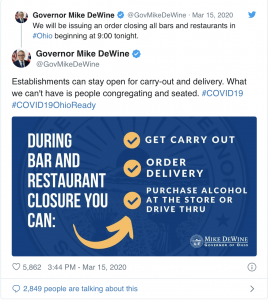 Owner of Keystone, Kristine DePriest said she wishes Gov. DeWine would have made the decision even earlier because she doesn’t think having all the businesses open was good because everyone was still in close proximity to each other.

Not only are businesses like Keystone being forced to close because of the COVID-19 outbreak, they are also closing during a time when they would normally be packed with basketball fans for the annual NCAA tournament.

March Madness is one of the busiest times of the year for sports bars and restaurants. And for a local business like Keystone, the yearly tradition is responsible for a lot of their profits.

“It looks like it’s about a quarter million dollars that is lost revenue from that happening,” she said.

DePriest said she’s not only losing revenue from the March Madness cancellation, but also the cancellation of The Arnold, The Big Ten Tournament and St. Patrick’s day. 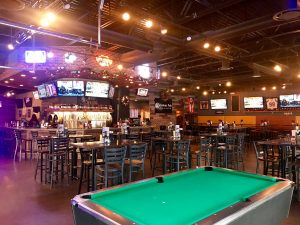 Sales are down 99% for this small-business, and even though the Polaris location is open for carry-out, that business is barely seeing one order a day.

With business down, DePriest said she’s trying her best to rotate work schedules for her staff but she can’t afford to keep anyone there full-time. They tried doing that early on and operated at a loss.

“I’m hopeful that it’s over in the next couple of weeks and we can get back to business and open up the patios and everything, but it’s all up in the air right now,” DePriest said.

Many small-businesses are trying to stay afloat during this pandemic by continuing to offer take-out orders through delivery companies such as GrubHub. But for restaurants and bars across Columbus this year, March Madness has turned into March Sadness…

Bars And Businesses Not Impacted By Smoking Ban

March Madness Set to Invade Cleveland and Columbus in 2015