The ordinance will go into effect as soon as Mayor Steve Patterson, Council President Chris Knisely, and Clerk of Council Debbie Walker sign it. Patterson said he expects to sign it Tuesday morning.

The new legislation comes with a $100 penalty payable to the Athens Police Department.  Those who do not request an appeal or pay the fine within 30 days would receive a minor misdemeanor citation.

Several Council members emphasized how important it was for them to pass the ordinance quickly, as Athens County has seen a sharp increase in COVID-19 cases since the end of June. By the state’s standards, Athens County is listed at a Level 2 Public Emergency. Some establishments have closed their doors again after employees tested positive.

Patterson said wearing a face covering is something everyone should be doing to slow the virus’s spread, as well as maintaining at least six feet of physical distance from others, and washing hands for at least 20 seconds.

“I am truly believing that this is the best thing that we can be doing for our community now moving forward so that we can at least start to bend this curve,” he said. “We’re in exponential growth right now, we’re not in linear growth anymore.” 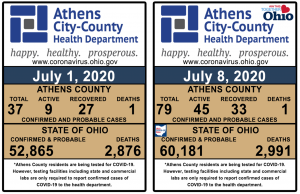 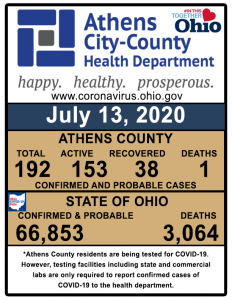 The ordinance requires people to cover their nose and mouth while entering, exiting, or waiting to enter businesses, city buildings, and public transportation. It also requires people to wear a mask inside city limits while outdoors if they are unable to remain at least six feet apart from people.

Before voting, City Council members approved amendments to the exemptions section of the ordinance. The list of exemptions to the mask mandate now includes officiants of religious services. The ordinance also includes specific language exempting people with respiratory illnesses from the mask mandate, and those who are speaking with people with a hearing impairment or who otherwise need to see mouth movements in order to understand someone.

Children under 10 years old, individuals walking or exercising while remaining six feet apart, restaurant and bar patrons who are eating and drinking, and public safety employees who may have a limited capacity to do their job while masked are also included in the list of exemptions.

Beth Clodfelter, city council representative-at-large, responded to concerns some members of the public had that the ordinance did not adequately address the potential community spread from bars and restaurants.

“We can’t strengthen this more than the state’s bills,” she said. “…We’re a statutory city and even though it isn’t perfect, and I would like to see it be even stronger, I hope that it is already strong enough that it’s going to keep people safe, going to prevent them from suffering, hopefully it’s going to prevent anyone (else) from dying.”

The mask mandate will remain in effect until Ohio’s state of emergency is over.

WOUB’s Tom Hodson talked with Mayor Patterson about the ordinance on an episode of “Conversations from Studio B.” Listen here: