ATHENS, OH – Now that the premiere of Our Town: Gallipolis is behind him, WOUB Producer/Director Evan Shaw finally has the chance to breathe and appreciate the program. The 13-time Emmy-Award winner and a southeastern Ohio native says with each Our Town documentary, he learns something new about the region and his community pride continues to grow.

“We’ve heard from many people about how much they appreciated and enjoyed Our Town: Gallipolis, said Shaw. “And that means so much to us. Gallipolis and the people in it are special, and I think we were able to show why in this documentary film.”

The Our Town: Gallipolis documentary film is an hour-long look at the history of the Gallia County community. It examines many unique aspects and people of Gallipolis including: the town’s first settlers, the Silver Bridge, and Gallipolis’ connection to the sinking of the Titanic. The film also explores some of Gallipolis’ more notable residents like Bob Evans, Tuskegee Airman Henry Norman and Grandma Gatewood.

People who were surveyed after watching the virtual premiere of the program on September 17 said they felt proud, emotional, happy and excited at the end of the film. And for Shaw, that is what the series is all about.

“The Gallipolis film was the seventh historical documentary in WOUB’s Our Town series, and the series is about telling the story of this region in a way that educates and inspires community pride,” said Shaw. “These communities and this region have so many reasons to be proud of their history and their people. We hope that after watching, people in the communities featured can puff out their chests a little bit and know that their future is bright.”

Our Town: Gallipolis, was originally scheduled to premiere in March, but WOUB postponed the release of the documentary due to the global pandemic.

“We wanted to be able to show it to the people of Gallipolis first, before it aired on television. However, we had to cancel our in-person premiere screening event that had been scheduled in Gallipolis due to the Coronavirus. So, we decided to wait to air the documentary on television,” said WOUB General Manager Mark Brewer. “With all the uncertainty surrounding the pandemic, we held a virtual premiere screening for the people of Gallipolis last week, and premiered the program on WOUB TV last (Monday, September 21) night.”

Shaw has already started working on the next film the series: Our Town: Chillicothe.

“We will announce more details on this soon,” said Shaw. “But we are excited to get to work in Ross County and tell the rich story of that community.”

If you missed the Our Town: Gallipolis, there are a couple of ways you can still watch it.  You can support WOUB by becoming a sustaining member who donates $5 a month at woub.org/give, and that will get you access to the streaming service WOUB Passport, or you can purchase a DVD of the program at woub.org/shop.

Our Town: Gallipolis is made possible in part by the generous support of the following organizations. 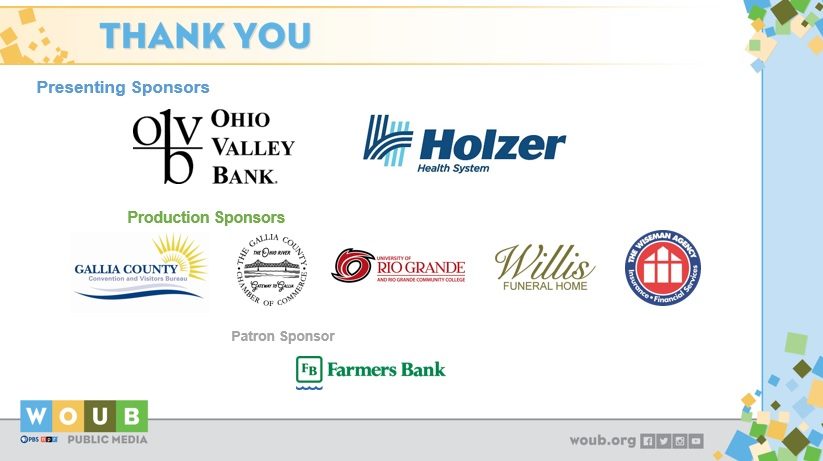