In the midst of a historic pandemic, economic hardship, and a reckoning with racism, this November Americans will decide who will lead the nation for the next four years: President Donald Trump or former Vice President Joe Biden.

And before the votes are cast, as it has for every election since 1988, FRONTLINE will present The Choice — its critically acclaimed election year special offering interwoven investigative biographies of both major-party candidates.

The Choice 2020: Trump vs. Biden, a two-hour documentary telling the story of a deeply divided nation though the lives of the two men who want to lead it, will air Monday, November 2, 2020 on WOUB and online. 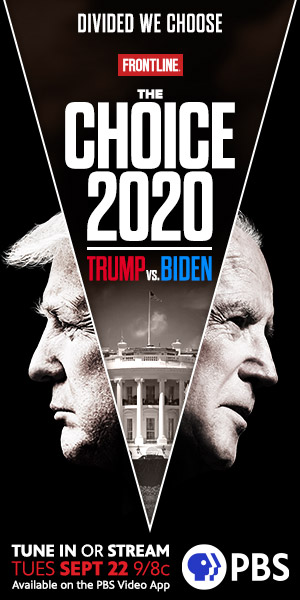 From veteran chronicler of U.S. politics Michael Kirk, who with his team has made four prior installments of The Choice and nearly 20 documentaries about the Trump and Obama eras, this two-hour FRONTLINE special will be a unique primer for voters on the eve of the election — and a guide to what Americans can expect from the president who will be sworn in on January 20, 2021 to lead a country in crisis.

Through revealing interviews with those who know Trump and Biden best, The Choice 2020 will offer a deeply reported narrative arc of both candidates’ lives.

“The only way you would get an acknowledgement out of Donald that he may have not done it right,” Trump’s personal lawyer Rudy Giuliani tells FRONTLINE, “He would say, ‘I think my dad would have done that differently.’”

Joe Biden’s sister, Valerie Biden Owens, recounts the impact of the death of Biden’s wife and daughter in a car accident, shortly after his election to the Senate in 1972: “In six short weeks, we went from being on top of the world…he was the bright young hope. He went from that to being a young widower, a father of two children, and a single dad. And a man with a broken heart.”

With trustworthy journalism and powerful new insights at a moment when anxious voters are being saturated with misinformation and partisanship, this clear-eyed documentary will examine each man’s approach to power, the defining moments that shaped their lives, and their visions for America’s future at this pivotal juncture.

“People appreciate a fighter and they appreciate someone that they think is fighting for them,” Rep. Jim Jordan (R-OH), ranking member on the House Judiciary Committee, tells FRONTLINE of Trump.

“The choice is whether or not this country will survive its most significant challenge since 1860,” Rep. James E. Clyburn (D-SC), majority whip in the U.S. House of Representatives, says. “It is the most important election, in my opinion, since 1860.”

About FRONTLINE
FRONTLINE, U.S. television’s longest running investigative documentary series, explores the issues of our times through powerful storytelling. FRONTLINE has won every major journalism and broadcasting award, including 93 Emmy Awards and 24 Peabody Awards. Visit pbs.org/frontline and follow us on Twitter, Facebook, Instagram, and YouTube to learn more. FRONTLINE is produced by WGBH Boston and is broadcast nationwide on PBS. Funding for FRONTLINE is provided through the support of PBS viewers and by the Corporation for Public Broadcasting. Major funding for FRONTLINE is provided by the John D. and Catherine T. MacArthur Foundation and the Ford Foundation. Additional funding is provided by the Abrams Foundation, the Park Foundation, The John and Helen Glessner Family Trust and the FRONTLINE Journalism Fund with major support from Jon and Jo Ann Hagler on behalf of the Jon L. Hagler Foundation.