The artist of the design selected by the committee will receive a stipend of $1,800 for their design and the production of six physical awards, the first of which will be presented to the 2021 recipient of the Athena Award.

Berry Dilley, who has been involved with the Athens City Commission on Disabilities since its creation, said the search for a new design for the award has been different than imaged due to the COVID-19 crisis.

“In 2015, we commissioned this unique, beautiful award and we had six of them made, and the last of those was just given to Patty Mitchell of Passion Works. We are now looking to have artists in the community submit designs for a new set of six awards,” said Dilley. “Given COVID, it’s been a lot harder to get the word out and to get the excitement that we were hoping to have about this.” 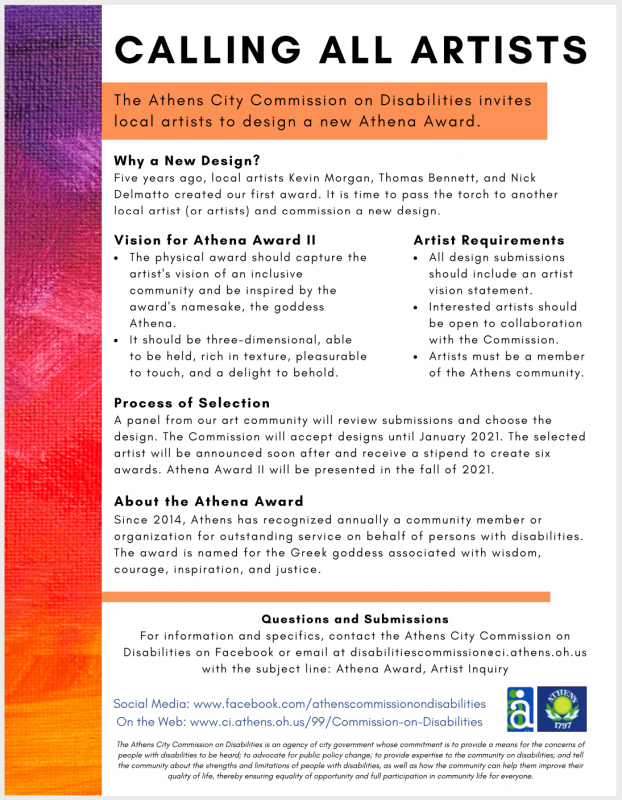 Dilley said the Commission is interested in submissions from both amateur and professional artists throughout the region, and she reiterated that each Athena Award has always been unique and not taken from a mold, although the initial design of a glass flame atop a wooden base has remained throughout the past five years.

“We want an award that you can hold in your hands; that has a sense of stability and sensuousness to it, something that is a delight to behold,” said Dilley. “So even if a person has a disability, they would be able to connect with it some way.”

Dilley said the Athena award is named after the Greek goddess Athena, the goddess of wisdom, courage, inspiration, and justice – all of which are qualities Athena Award recipients display.

“I would recommend that those who submit new designs for the Athena Award really think about what Athena stands for and what Athens means to them,” Dilley said. “They should also think of the many individuals who have given so much of their time to improve the lives of the people who live here. What all of that means to the individual artist is what we hope they can express in a redesign that is absolutely beautiful and unique.”

Submit designs before or by January 31, 2021 to the Mayor’s Office, City of Athens, 8 East Washington Street, Athens, OH 45701. All designs should include a vision statement, and for more information email disabilitiescommission@ci.athens.oh.us or call 740-592-3338.

The Athens City Commission On Disabilities