ATHENS, OH – On its surface, the work Deacon Dave Bezusko is doing today doesn’t appear to have much of a connection to the field he studied in college at Ohio University. But, Bezusko says working at WOUB as a sports broadcaster and graduating with a journalism degree is exactly the background he needed to lead the United Way of Logan County and speak from the altar at Our Lady of Lourdes Catholic Church in Marysville every Sunday.

“The skill set I got from WOUB, both on and off air, is transferable,” said Bezusko. “There are so many interpersonal interactions and situations that you find yourself in as a broadcast journalist. So much of broadcasting is about how confident you are. How do you come across to people? How credible are you? You learn to bring that level of credibility and expectation of professionalism to all of your communications.”

Bezusko grew up in Warren, Ohio and came to Athens in 1993. He chose Ohio University because he knew there were opportunities for students to get involved in journalism right away.

“I wasn’t sure if I wanted to do print or broadcast journalism,” said Bezusko.  “So, I got involved with both right away, working at The Post and WOUB. The broadcast side eventually won out, and I became the sports director at WOUB. Even though it was hard work, I enjoyed the real-world experience.”

Bezusko covered sports for WOUB on the radio and television and knew the importance of covering not just Ohio University sports, but also high school sports for people in the region. 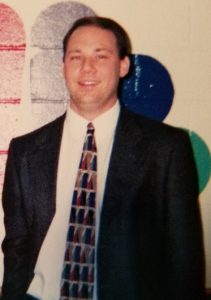 “Newswatch was on at 11 p.m. then. And one Friday night, I was getting ready to go on the air, and we didn’t have a final score from the Alexander football game. No one had called in a final score, and we needed to get it,” Bezusko said laughing. “So, I came up with the idea of calling the Dairy Queen in Albany because we knew that was where the students went to hang out after the game, and that’s how we got the score.”

After graduating in 1997, Bezusko got his first job at WHIZ in Zanesville, doing everything from sports anchoring to news reporting to weather. He eventually became sports director. After that, he moved on to WTOV in Steubenville as weekend sports anchor.

After deciding to get out of the broadcast business, Bezusko started working at Dublin City Schools as a communications specialist. Two years later, he was hired by the United Way of Union County as campaign and public relations director. In 2015, Bezusko became the executive director of the United Way of Logan County. Not long after, Bezusko was ordained as a deacon in the Catholic church by the Diocese of Columbus.

“Like I said the skill set you gain and use at WOUB and in broadcasting is transferable to other fields beyond broadcasting,” said Bezusko. “It’s fact finding, putting together a presentation, compiling all your information and determining what’s important. Those same skills are used to prepare a newsletter, write a letter to donors and even put together a sermon for Sunday morning. It’s about engaging people in a way meaningful to them.”

Bezusko didn’t let go of broadcasting completely. You can still hear him on the air calling Friday night high school football games on WBLL in Bellefontaine.