Government vs. the Press in “The Final Cut” from FRONTLINE; Friday, January 8 at 9 p.m.

FRONTLINE, the PBS investigative documentary series, announced that it has acquired A THOUSAND CUTS — the new film from award-winning filmmaker Ramona S. Diaz that offers an inside look at the key players in this escalating war between press and government in the Philippines and the ongoing threat against freedom of the press.

A THOUSAND CUTS examines social media disinformation campaigns and the crackdown on the news media in the Philippines by President Rodrigo Duterte – who has made Ressa one of his top targets. At great personal risk, Ressa, the chief executive of the independent news site Rappler has been at the forefront of holding Duterte and his government accountable for their violent war on drugs. In response, Duterte has barred Rappler reporters from the presidential palace, revoked Rappler’s license, and Ressa herself has been charged with a cyber libel case. 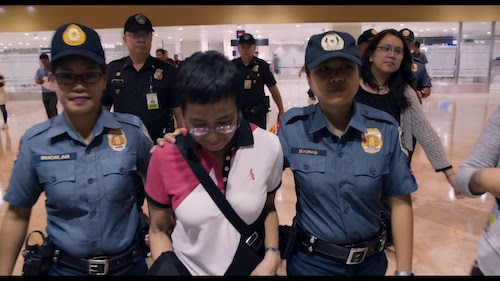 “I can’t be more thrilled to be working with FRONTLINE to launch this film into the world,” says filmmaker Diaz. “A THOUSAND CUTS comes at a time when journalists are being targeted for doing their jobs and independent media is at risk globally. It’s both a timely and timeless story of abuse of power and people who refuse to be cowed into silence. With its unparalleled work in investigative journalism and its fervor for rolling out timely cinematic documentaries, FRONTLINE is the perfect home for this film.”

“As an admirer of Ramona’s filmmaking — and a believer in Maria’s fight to be an independent journalist in the Philippines — I am so pleased to bring this important documentary to our PBS audience,” says FRONTLINE Executive Producer Raney Aronson-Rath. “Journalism is essential to a strong democracy — a notion that’s at the heart of A THOUSAND CUTS. We stand with fellow journalists in pursuit of the truth and look forward to sharing this film with our viewers this fall.”

“We are thrilled to be releasing A THOUSAND CUTS, our third theatrical release with our partners at FRONTLINE,” says Amy Letourneau, Senior Vice President, PBS Distribution. “Ramona’s powerful portrait of Maria Ressa and the importance of a free press is both timely and necessary, and we are honored to bring this remarkable film to a wide audience.”

A THOUSAND CUTS made its world premiere at Sundance Film Festival in January and debuted internationally at Hot Docs. The film will also screen as a part of AFI DOCS and Full Frame this June.