ATHENS, OH – When Evan Millward started looking at colleges, he didn’t always want to go to Ohio University. But, now the Weekend Anchor/Reporter at WCPO Cincinnati is very thankful that he changed his mind. Millward says without the real-world experience he got working at WOUB Public Media, he wouldn’t be where he is today.

“When I was a senior in high school in Beavercreek, any time I talked to anyone in Ohio about studying journalism, they would tell me that I had to go to Ohio University,” said Millward. “I looked at Bowling Green, Kent State, Miami and Ohio State, but when I visited Athens, there was just something about it. You go through hills and valleys to get there and it grows out of nowhere, like a mirage. It’s such a beautiful campus. Once you spend any amount of time there, you are sucked in. It was immediate. I knew I was done applying.”

Millward attended pre-college in the summer of 2007 and learned about the real-world experience he could gain by working at WOUB.

“My pre-college advisor told me that I should get involved at WOUB right away,” said Millward. “So, when I started in the fall, a bunch of us from my communications residential learning community went to the WOUB welcome meeting. I remember thinking that it was amazing and I needed to be at WOUB.” 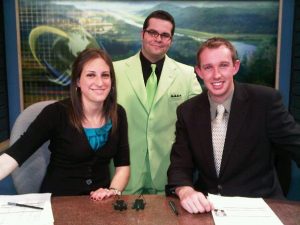 Millward started working in the WOUB newsroom as a journalist. He did both radio and television. Millward worked as a producer and a reporter/anchor on Newswatch. His time at WOUB taught him how to do a little bit of everything in the newsroom, which came in handy when he graduated in 2011.

“My first position was in visual storytelling at the Columbus Dispatch, as a videographer and web producer. That September, I moved to Missouri to launch the Jefferson City bureau for KMIZ-TV in Columbia, a job which I got because of a connection to WOUB.”

When Millward was a student, one summer he traveled with a professional staff member to Columbia to pick up a new Newswatch set from KMIZ. KMIZ had donated the set to WOUB.

“In my cover letter, I talked about how I visited the station to pick up the set and the news director remembered me,” said Millward laughing. “I got the job and was promoted because I knew how to produce, anchor and report from my time at WOUB.”

In July of 2014, a couple of friends from Ohio University who worked at WCPO in Cincinnati, recommended Millward for an open reporter position there. He was offered the job and has since been promoted to weekend anchor.