ATHENS, OH – Alissa Henry, BSJ ’09, is the host of Cash Explosion, the nation’s only statewide TV lottery game show that has been on the air for 34 years. And she credits her time at WOUB Public Media and Ohio University for giving her the skills and confidence to do it.

“WOUB was amazing and that’s putting it lightly,” said Henry. “I learned a lot about putting together stories and interviewing people. I learned how to be in front of the camera and the tricks to reading the teleprompter. The hands-on experience was so vital.” 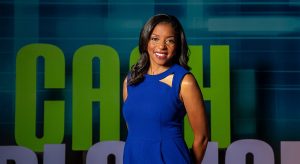 Henry grew up in Columbus and knew since she was a child that she wanted to study journalism.  Growing up, Henry watched and admired Yolanda Harris, a local Black journalist, who is now a co-anchor in Columbus. As she neared high school graduation, Henry started looking at colleges with great journalism schools.

“Yolanda was someone who looked like me on television and that was so important,” said Henry. “My dad and I went to visit Ohio University and I fell in love because it was so beautiful.”

Not long after starting college in Athens, Henry learned from a fellow journalism student about the opportunities available to volunteer at WOUB.

“I started working on WOUB radio and then worked my way into television,” said Henry. “I really value that experience because I also learned how to work with people. The professional staff members at WOUB were hard on us, but it was good.”

“I learned a lot in the classroom but at WOUB we had a news product to put out each day for the community,” said Henry. “We made mistakes and learned from them. I learned the importance of managing your time, not getting off schedule and making your deadline.”

After graduation, Henry struggled to find a job in journalism due to the Great Recession. But she eventually started working in television after winning a co-hosting job through the CW Star Contest. That opportunity landed her a reporting job at ABC 6 and Fox 28 in Columbus. In 2017, she started hosting Cash Explosion.

“One of the biggest things I learned at WOUB that is crucial in my job as Cash Explosion host is how to pronounce the names of all the different cities and towns in Ohio,” said Henry. “We have contestants from all over the state, and I know how important it is to them for me to get their town pronunciation right. I get to meet people from all over the state of Ohio that have all kinds of different experiences and dreams. I love that I get to be a part of people winning lots of money.”

Henry said when she thinks back on her time at Ohio University and WOUB, she never realized that she could be the host of a game show one day.

“It’s interesting that out in the world there are opportunities you didn’t know existed,” said Henry. “I love that throughout my career I have had the opportunity to work with some of the people I worked with as a student at WOUB. I also love that having WOUB in my background and having that WOUB and Ohio University connection, it almost explains things when you meet someone. I think to myself ‘You went to Ohio University and worked at WOUB, that means you are a good journalist.’”

3.4 Million Homeowners Skip Payments. But Many Are Scared, Say Congress Needs To Act