ATHENS, OH – Carter Rodriguez currently works as the broadcast operations manager at Esports Engine in Columbus. Esports is not the field Rodriguez thought he would end up in when he started as a student at Ohio University and WOUB in 2009. But Rodriguez says it’s the perfect fit, and he couldn’t be happier.

“I didn’t know quite what I wanted to do late in high school, but as a little kid, I said I wanted to be a sports announcer,” said Rodriguez. “A friend of mine from high school who went to Ohio University, Tanner Smith, came home and was telling me about all the cool stuff he was doing at WOUB, and I thought maybe I could try to do that.”

So, Rodriguez, who grew up in Pickerington, decided to apply to Ohio University. Smith convinced Rodriguez he needed to come to Athens early to work on WOUB’s high school football program Gridiron Glory which started when football season began in August.

“I got so much great experience that summer before I even started taking classes because I got to work with upperclassmen who gave me great feedback,” said Rodriguez. “The mentorship aspect of WOUB from fellow students and professional staff members is what makes it so special.” 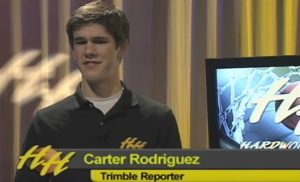 “That’s when I realized that I didn’t want to be on the air, I wanted to manage behind the scenes,” said Rodriguez. “I learned how to lead and work as part of a team at WOUB. I had to lead a team at 20 years old when I was producing Hardwood Heroes. I learned what to do and what not to do.”

When Rodriguez graduated in 2013, he got a job at a digital sports network in Chicago called 120 Sports. He spent five years there and worked his way into several different positions including content management and show producer. 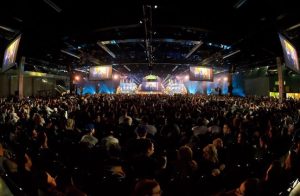 Rodriguez’s wife eventually got a job back home in Columbus, so the couple left Chicago. Rodriguez was applying for several jobs in the Columbus area when he stumbled across a job posting for a broadcast manager position at an esports company called Major League Gaming (MLG).

“I was not an esports fan at the time. I liked video games but did not watch esports,” said Rodriguez. “However, I knew with my skills I could do the job. So, I applied and got it! And I learned that esports is really fun. There are hundreds of games and hundreds of communities. It’s an industry that is really growing.”

During his time at Esports Engine, Rodriguez has been able to travel throughout the U.S. and the world. For various events, he’s been to Sydney, Australia; Katowice, Poland; Las Vegas, Los Angeles, Seattle and Minneapolis.

“It’s a great job and a great company. We can support everything that goes into esports. We do every aspect,” said Rodriguez. “I don’t think I have the career I have if I didn’t work at WOUB specifically. When I got into the professional work place, I had already been doing the work for four years. I hit the ground running. It was like training with ankle weights. I can thrive wherever I go in my career.”

Ohio Football: Hagan and Bobcat defense locked in on the Wolfpack