“THE WORLD IS MY COUNTRY” 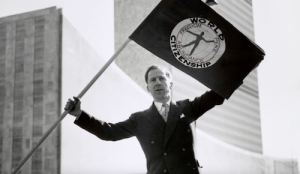 Garry Davis was Danny Kaye’s understudy and a rising Broadway star until WWII interrupted. Garry enlisted, eager to fight Hitler. But the horror of dropping bombs on civilians, the loss of his brother, and the devastation of Hiroshima compelled him to give up Broadway, and make the world his stage.

With Albert Camus, he interrupted the UN to demand a democratically elected world government capable of outlawing war. 20,000 supporters rallied with them. The next day the UN passed the Universal Declaration of Human Rights – which said it’s up to the people to create a world order that can protect human rights. Garry gave up his US citizenship and declared a government of, by, and for the people of Earth.

In 1954 his World Service Authority began issuing World Passports, which have been recognized on a de facto basis by 170 countries. A million people have registered as World Citizens. Garry, now 85 continues his pioneering work.

One of the Most Successful Albums: “Fleetwood Mac- Rumours” on CLASSIC ALBUMS, July 30 at 10 pm