One of the Most Successful Albums: “Fleetwood Mac- Rumours” on CLASSIC ALBUMS, July 30 at 10 pm

Fleetwood Mac’s hugely successful Rumours was released in 1977, selling 15 million copies worldwide. It remained on the U.K. charts for a staggering 433 weeks, the U.S. Billboard album charts for 130 weeks, and was christened Album of the Year at the 1978 Grammy® Awards. This episode of CLASSIC ALBUMS goes behind-the-scenes of the recording of one of the most successful rock albums of all time. 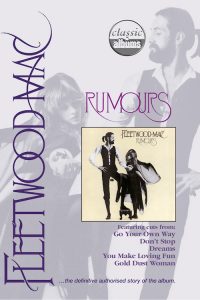 The documentary includes a specially recorded version of Christine McVie’s haunting “Songbird” and a wonderful new acoustic performance of “Never Going Back Again” from Lindsey Buckingham.

Fleetwood Mac was founded by Peter Green in 1967 and named after Mick Fleetwood and John McVie. After Peter Green left in 1969, Fleetwood and McVie remained as original members, and the band has since featured a cast of brilliant talents. Most notably, Christine McVie joined the band in 1970, with Stevie Nicks and Lindsey Buckingham joining in 1974.

The enduring spirit of Fleetwood Mac stands for an incredible body of great music that has connected generations of people all over the world for more than 50 years. Fleetwood Mac has sold more than 100 million records worldwide and the Grammy Award-winning band was inducted into the Rock and Roll Hall of Fame in 1998.

CLASSIC ALBUMS is a British documentary series that celebrates the making of the greatest albums in pop, rock and heavy metal music. Each episode features interviews with band members, producers and others discussing the creation of the historic recording.