Theatre organist Dennis James will bring period accurate music to the Nov. 5 screening of ‘Nosferatu: A Symphony of Horrors’

If we were to hop backwards in time by about a century, we would find the “silent films” of the late 19th century and early 20th century were actually not so “silent” affairs, after all.

Rather, screenings of these so-called “silent films” would be accompanied by live music performed by a pianist, a theater organist, or even a small orchestra. Sometimes films would include sheet music for live performers to play during screenings, but other times musicians would improvise alongside the film as it played.

With the rise of synchronized sound in film starting in the late 1920s, opportunities to experience a live musical soundtrack to a film have become rarer and rarer. However, thanks to internationally recognized musician, historic preservationist, and theatre organ revivalist Dennis James, Athens will have just such an opportunity later this week. On Friday, November 5 at the Southeast Ohio History Center, James will provide organ accompaniment to a screening of the 1922 film “Nosferatu: A Symphony of Horrors” starting at 7 p.m. 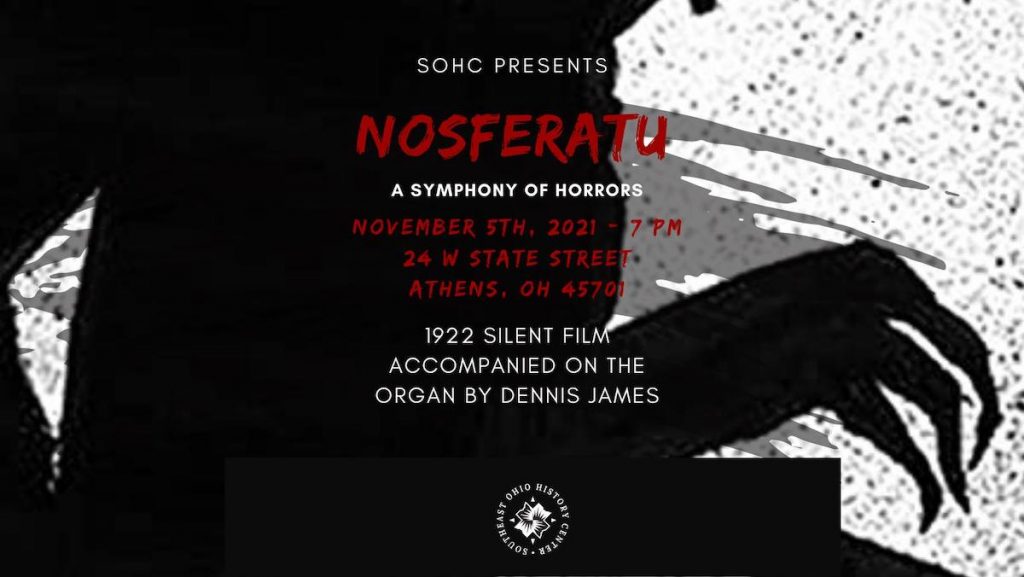 James’ career began on Halloween night, 1969, when he played organ alongside a screening of 1925’s “The Phantom of the Opera” while he was still an undergraduate student at Indiana University. Leading up to the event, James orchestrated an extensive publicity campaign geared at generating curiosity about the upcoming performance.

James hand printed around 400 tickets for the event. Much to his surprise, a whopping 4,200 people showed up.

“Really, I ended up starting my career in 1969 kind of by accident,” James said. “I got kind of famous as the young person who was renewing interest in silent movies — and that’s it, I’m still doing it. And it’s 54 years later!”

“Nosferatu: A Symphony of Horrors” accompanied by Dennis James starts at 7 p.m. on Friday, November 5 at the Southeast Ohio History Center (24 West State Street) in Athens. The event will feature refreshments and a red carpet. Costumes are encouraged, but not required. Tickets are $15 for SOHC members and students and $20 for adults. A Family Bundle is $60 and includes four tickets, snacks and drinks. Purchase tickets by calling 740-592-2280 or stop by the Southeast Ohio History Center in person.