ATHENS, Ohio (WOUB) — Several new medical marijuana dispensaries may set up shop in southeast Ohio, including one at the site of the old Wild Horse Cafe on West Main Street in Pomeroy.

The riverfront restaurant was once a popular destination for locals and tourists, but has been closed since a fire two years ago that caused significant damage. The property is now listed for sale for $550,000.

The state announced last year it would issue 73 additional dispensary licenses. It received 1,456 applications. Of these, 284 were for the 17 new licenses allotted for the southeast region, which is divided into nine districts.

(Click here for maps outlining the dispensary districts, with the number of existing dispensaries in each district.)

The applicants were ranked through a random drawing late last month. The Ohio Board of Pharmacy, which administers the dispensary program, switched to this method after facing multiple legal challenges when it had reviewers score the applications for the first round of 60 licenses, issued in 2018.

The Pomeroy location is the top-ranked application for District 6 in the southeast region, which includes Athens, Meigs and Vinton counties. This means it will receive the one new license allotted for this district provided it meets certain criteria.

For example, the applicant must demonstrate sufficient funding to build and operate a dispensary, and the proposed location cannot be within 500 feet of a prohibited facility, such as a school, church or public park.

If for some reason the Pomeroy location is found ineligible, the license would go to the second-ranked application, provided it passes muster. That application is for the site of a former gas station and convenience store on Richland Avenue in Athens. 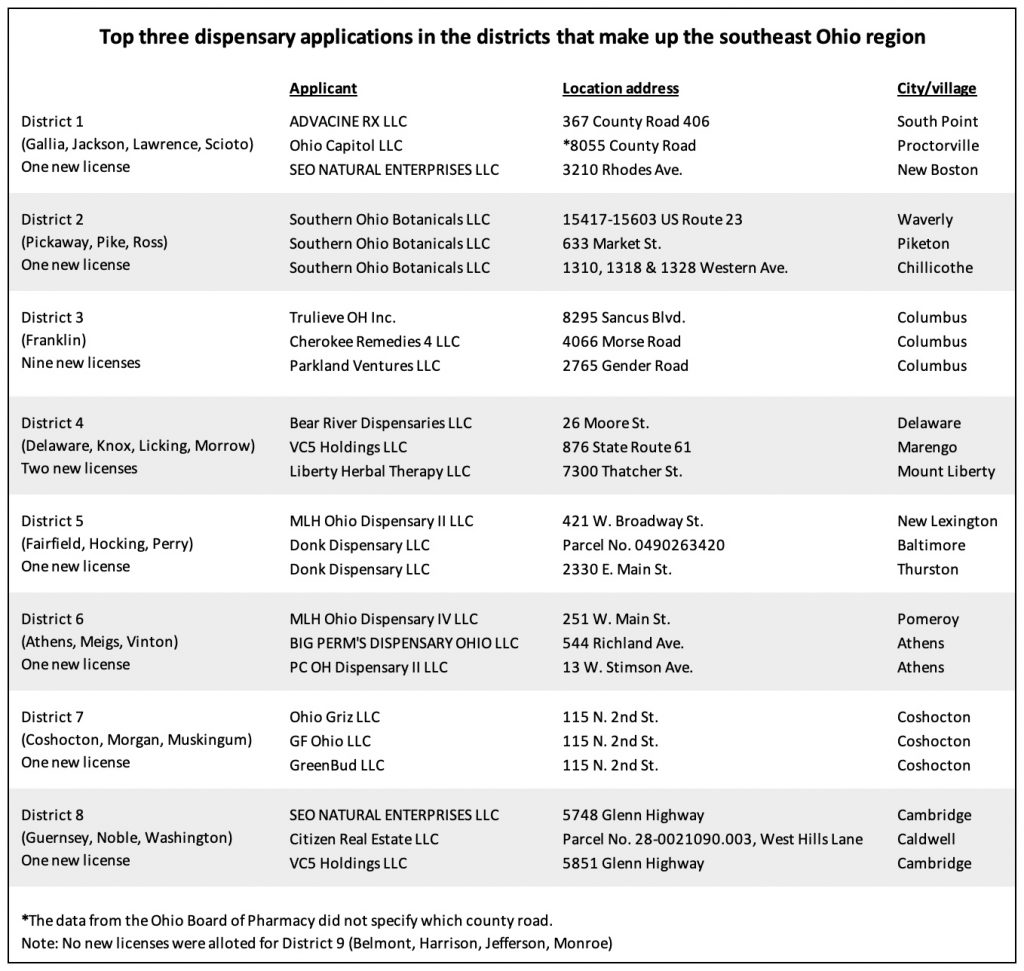 Six other applications for District 6 are also for locations in Athens, including the former Wendy’s restaurant on Court Street, one block from the Ohio University campus. That application is ranked ninth.

Athens is home to the only dispensary currently operating in District 6, Harvest of Athens, which was awarded a license when the first round were issued and opened in September.

Another top-ranked application in southeast Ohio is for a strip mall on the main retail corridor in South Point, a riverfront village in Lawrence County. This is in District 1, which also includes Jackson, Gallia and Scioto counties, and has been allotted one new license. The strip mall’s tenants include a Tractor Supply Co. store and a Big Lots store.

Applicants clearly thought Zanesville is ripe for a dispensary. Nearly one-quarter of the applications for the southeast region, 67 to be exact, were for locations in Zanesville. The city is in District 7, which includes Coshocton, Muskingum and Morgan counties.

The fourth-ranked application is for a building on Maysville Avenue in the southern end of Zanesville that is currently occupied by a used-car dealer.

The only location that received more applications than Zanesville is Columbus. The capital city is in District 3, which is Franklin County. The district has six dispensaries, all in Columbus, and was allotted licenses for nine more. It received 110 applications, more than one-third of the total for the southeast region, all but two of them for Columbus locations.

Board of Pharmacy staff are now in the process of reviewing the top-ranked applications. It is unknown how long this process will take.

Country Club to Appeal Ruling it Must Sell to Nonprofit