ATHENS, Ohio (WOUB) –  Regional singer-songwriter Megan Wren has kicked off her Fall Equinox Tour, which takes her all-over Southern Ohio over the next two weeks, wrapping up Friday, September 30 at Arnold’s Bar and Grill (210 East Eighth Street) in Cincinnati. 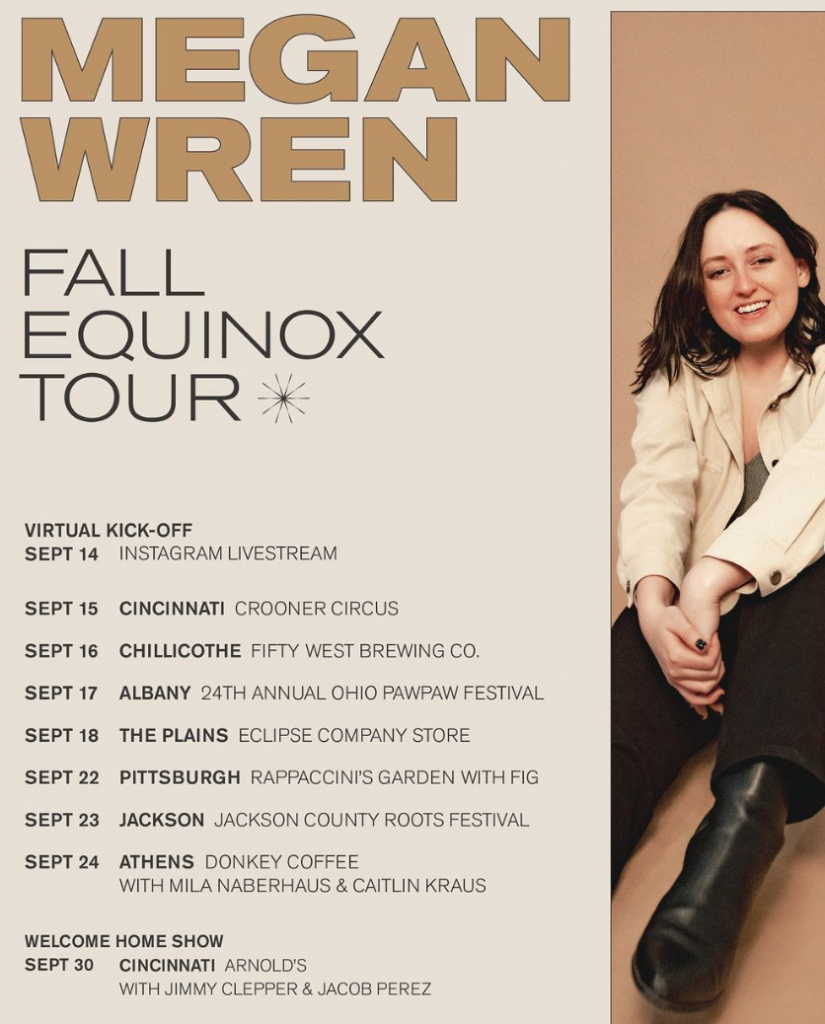 Wren said the tour takes its name from a significant turning point in the seasons for a reason – and not just because the fall equinox literally takes place about halfway through the tour.

After the release of her 2018 debut, “Sympathetic Vibrations,” Wren said found herself feeling profoundly stuck.

“For about four years, I struggled to even sit down at a page and write — I kept saying that I wanted to be an artist, and I was pursuing being an artist in every way, except I wasn’t actually making art!”

Wren said she reached a breaking point last year. She felt burnt out. She was cancelling shows, and even considering quitting music entirely.

“I had a series of moments happening in my life where I finally realized that I was heavily depressed. And that it was not just a COVID thing, not just like a ‘ there’s a pandemic, I lost my job, and life’s shifting gears’ kind of thing – but that it was a much more long term thing,” she said. “Obviously I’m in the process of still understanding it now, and I think mental health and healing is a lifelong process, but I really think that there was some kind of depression within me for probably about a decade that was really crippling and just continued to grow and continued to grow.”

In the fall of last year, Wren not only found a therapist she really clicked with, she also decided to finally try going on medication for depression, after being resistant to trying it for quite some time.

“I had a series of moments happening in my life where I finally realized that I was heavily depressed. And that it was not just a COVID thing, not just like a ‘ there’s a pandemic, I lost my job, and life’s shifting gears’ kind of thing – but that it was a much more long term thing.” – Megan Wren

Wren put a pause on everything in her life outside of what was strictly necessary to facilitate an intense period of healing.

“I very much stepped back from everything and really stripped my life down to the bare minimum so that I could have time to reflect. And that was really difficult. There was a lot of crying. There was a lot of journaling. There were a lot of Harry Potter marathons,” she said. “I spent some time just getting to know my own health better and uncovered a lot of limiting beliefs. I uncovered a lot of negative opinions about myself that I was holding. And I took the time to get into all of that – which wasn’t fun, but I’m glad I did it.”

As Wren worked on herself, she found herself finally able to write new material, which she has integrated into her setlists for the tour.

“A lot of times people are touring because they’ve put out a new project, but for me, I’m touring because I’ve found my voice again, and this is a celebration of that – a way to debut that,” Wren said. “I’ve made some major changes in my life and I’m finding more of my creativity lately, more of my passions lately, more of my ability for self-expression lately. And especially after the last couple years, I think a lot of people can relate to that feeling of shaking off the dirt.”

43 New COVID-19 Cases Were Reported In Athens County For Oct. 6

On Day 2, Biden Focuses On COVID-19 Strategy With 10 Executive Actions