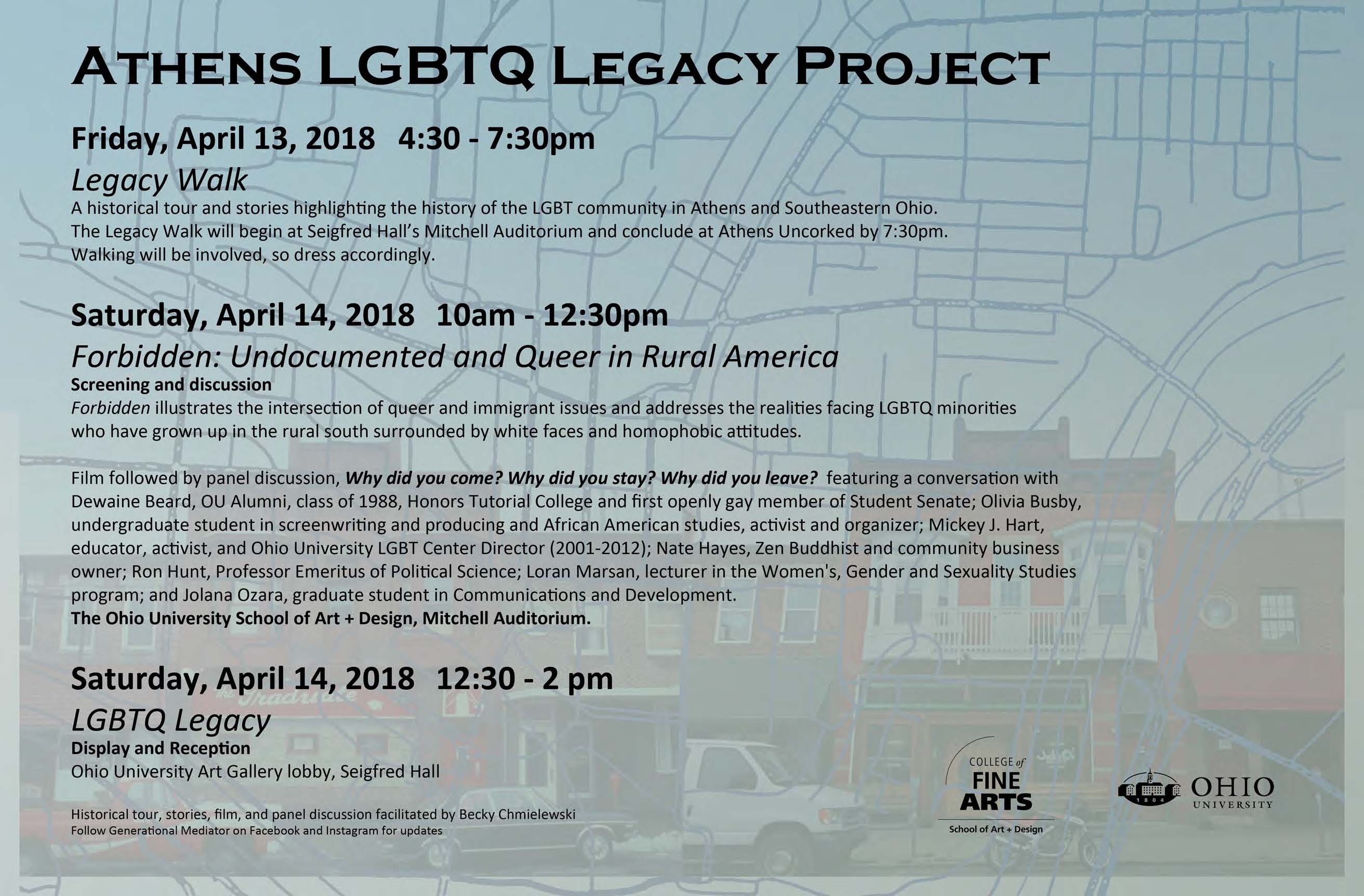 “The Legacy Walk,” will begin at Seigfred Hall on Friday, April 13 at 4:30 p.m. and conclude at Athens Uncorked by 7:30 p.m. Walking will be involved, so dress accordingly.

Saturday, April 14 will feature a film screening and discussion of “Forbidden: Undocumented and Queer in Rural America” from 10 a.m. to 12:30 p.m. in Mitchell Auditorium, followed by a display and reception from 12:30-2 p.m. in the Ohio University Art Gallery lobby, Seigfred Hall. Both are free and open to the public.

“Forbidden” illustrates the intersection of queer and immigrant issues and addresses the realities facing LGBTQ minorities who have grown up in the rural south surrounded by white faces and homophobic attitudes.

A panel discussion, “Why did you come? Why did you stay? Why did you leave?” will follow the screening, featuring a conversation with OHIO alumnus Dewaine Beard (HTC 1988), the first openly gay member of the Student Senate; activist and organizer Olivia Busby, an undergraduate student in screenwriting and producing and African American studies; Mickey J. Hart, educator, activist and former Ohio University LGBT Center Director (2001-2012); Nate Hayes, Zen Buddhist and community business owner; Professor Emeritus of Political Science, Ron Hunt; Loran Marsan, lecturer in the Women’s, Gender and Sexuality Studies program; and Jolana Ozara, graduate student in communications and development. Refreshments will be provided.

Through a spirit of giving, care-taking and the ethics of generosity, Chmielewski’s practice involves the creation of and facilitation of, inviting and welcoming social spaces intended to break barriers of social discomfort between groups and individuals. By collaborating with local businesses, staging events, hosting films and providing free meals, this practice is also intended to bring greater visibility to the LGBTQ community (and its local area history) in Athens, not only developing closer community connections, but facilitating new dialogue, and offering queer folks and allies a visible space to meet and to socialize.

Chmielewski received her B.F.A. in Painting and Drawing from Washington University in St. Louis and an M.A. in Studio Art from Eastern Illinois University. She currently resides in Athens, Ohio where she is completing her M.F.A. in Painting + Drawing, while serving as instructor of record for courses in the School of Art + Design.