The book examines the online life of the fans of The Rolling Stones and the online communities of which those fans are a part. It’s being billed as a book for anyone who likes rock music or has ever followed a band.

Experiences of Rolling Stones fans of different ages, from different countries, and from different fan boards form the basis of this book. Baker interviewed more than 100 fans from 2007 to the present. The only thing the fans have in common is their passion for the music and performances of The Rolling Stones. 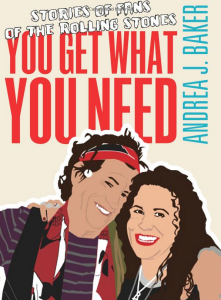 “What I found was all of the old things fans used to do, like wait in long lines to buy tickets, were changed dramatically by participating in these online communities,” said Baker.

The book was released on Amazon by Miniver Press for sale at the end of December. Baker was inspired to look at the lives of Rolling Stones fans because she is a big fan herself.

“I was a fan of The Rolling Stones early on after seeing them on the Ed Sullivan Show, and one thing I noticed very early on was my parents became speechless, which was not something that happened too often,” said Baker. “So I knew I had to pay attention to the band.”

Baker’s book examines how the online communities of Rolling Stones fans are focused on getting and finding tickets. Fans plan events around the shows, post set lists and videos during the shows, then discuss what was played and how it was played after the show.

“The social part of the fan experience used to be waiting in line for tickets,” said Baker. “Now that time is spent in your own home.”

The book is available in a Kindle version or in paperback through amazon.com.

Only The Stones Remain: The Importance of The Rolling Stones’ ‘Sticky Fingers’