Only The Stones Remain: The Importance of The Rolling Stones’ ‘Sticky Fingers’

April 1971 marked the beginning of an era for The Rolling Stones. That month brought with it the release of Sticky Fingers, an album that worked so well that the band would emulate portions of it over and over again (with varying degrees of success) on many of their subsequent records. Everything from the highly suggestive cover art to the boiled down, raucous flirtation with country music came as a result of the group’s newfound nearly perfect creative autonomy – after some eight years signed to Decca Records The Stones had just been granted their very own record label by Atlantic Records, the aptly named Rolling Stones Records.

On Friday, March 9 at 9:30 p.m., WOUB-HD will broadcast Rolling Stones: Sticky Fingers at the Fonda Theater, a performance from the group’s “From the Vault” series, which documents some of the legendary band’s various concerts from throughout their lengthy career. This concert, in particular, was recorded amidst the group’s 2015 Zip Code Tour, during which the outfit promised fans cuts from the group’s beloved Sticky Fingers album, and performed record in its entirety for a secret show in Los Angeles’ Fonda Theater. Check out this link for information on encore showings of this program. 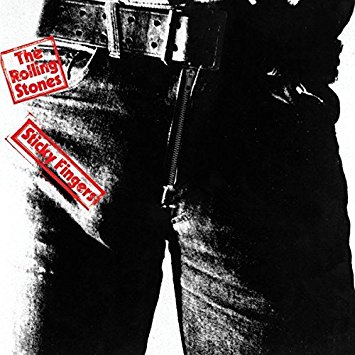 “The Fonda is pretty cool, and that show was a part of what the Stones have been doing ever since they started playing mostly mega-sized places: playing these little secret shows that don’t get announced until the day of the show. The tickets were maybe $15 for that show, it is something they really just do for their fans,” said Kyle Siegrist, the owner of Columbus’ Lost Weekend Records and an avid Rolling Stones fan. Siegrist has seen the Rolling Stones perform six times, most recently twice on the band’s Zip Code Tour, once in Columbus and once in Indianapolis. “The amazing thing is that those guys still have such amazing energy. They are all in their 70s, and they rock out like they are in their 20s. They never really stopped rocking. I saw Paul McCartney in 2015, also, and even though he was great and had a great set list, he just doesn’t have that same kind of energy anymore. The Fonda show was filmed about a month before I saw them perform in Columbus, and during that tour they somehow still had the energy of 20-year-old kids.”

Siegrist said that his love of The Stones dates back to the group’s 1981 Tattoo You album, which features “Start Me Up,” perhaps one of the best-known Stones tracks.

“At the time I would have been a sophomore in high school, and I was just starting to gravitate towards music, and the first record of The Stones’ that I got into was what was the new record at the time, Tattoo You,” said Siegrist. “The Sticky Fingers period is great, too, though. That whole period is great. Mick Taylor is a really solid addition to the band. I would say that Let It Bleed through Goat’s Head Soup might be the best studio stuff they ever did – I like all their records, but those might be some of the best.”

“Sticky Fingers marked a real turning point in the Rolling Stones’ career,” said Eddie Ashworth, a professor in Ohio University’s School of Media Arts and Studies. “The Rolling Stones had always been in the shadow of the Beatles, whether or not they’d ever admit it. Although they were their own thing, you could easily see them emulating the Beatles throughout their career – following Sgt. Pepper’s with Their Satanic Majesties Request, following The Beatles back-to-basics vibe with the release of Beggars Banquet, which is the Stones’ back-to-basics record. But it is during the Sticky Fingers era The Stones really came into their own. Everything we think of as defining the latter-day Rolling Stones came to fruition in this post-Beatles period. Sticky Fingers has a ton of classic Stones cuts that were played frequently on the radio.”

“The amazing thing is that those guys (The Rolling Stones) still have such amazing energy. They are all in their 70s, and they rock out like they are in their 20s. They never really stopped rocking. I saw Paul McCartney in 2015, also, and even though he was great and had a great set list, he just doesn’t have that same kind of energy anymore. The Fonda show was filmed about a month before I saw them perform in Columbus, and during that tour they somehow still had the energy of 20-year-old kids.” – Kyle Siegrist, owner of Lost Weekend Records

Some of the most popular cuts from the album include “Brown Sugar,” “Wild Horses,” “Moonlight Mile,” “Can’t You Hear Me Knocking,” and “Dead Flowers,” all of which helped the album achieve triple platinum certification in the U.S.

“Mick Taylor becoming a part of The Stones’ sound was a turning point, too. The band’s sound drastically changed – from Brian Jones’ sort of multi-instrumentalist, take-it-as-far-as-you-can kind of vibe to something like Let It Bleed, where Mick Taylor really kind of grounds the band,” said Ashworth. “They started to get a bit more grounded in their more traditional blues-rock sound, and they started to create the iconography that we know now – the mouth with the tongue sticking out dates back to this era, the sort of mainstream debauchery side of the band started to be emphasized more, rather than the actual, dangerous debauchery of the band’s early days. The trade-off of this era of The Stones is that they did become more of a brand – literally they were on Rolling Stones Records – but they did find what they were really good at, and they have continued to do it throughout the rest of their career.”

“The Stones really persevered. The Beatles had their 10-year run in the ‘60s, but The Stones managed to keep it going for decades,” said Siegrist. “That is why they are so culturally important. They have never broken up – they have had members die, and they just replace them and keep on moving. That is why they are the greatest rock ‘n’ roll band of all time.”

The British are Coming (to Stuart’s Opera House)

The Human Importance of Live Music: an Interview With Larry Groce