The Ohio baseball team defeated the Buffalo Bulls (10-17, 4-5 MAC) winning 3-1 and 6-5 in Sunday’s doubleheader. The Bobcats lost the first game of the series on Friday, 9-3, but came back with a vengeance after Saturday’s game was postponed due to a “real feel” temperature of 27 degrees.

“We had to bring some juice this weekend, and they brought it, man,” Head Coach Rob Smith said. “Anybody that saw all three games clearly saw a difference between Friday’s effort and what we were able to do today in terms of how we played – that’s a testament to our guys – they showed a lot of toughness.” 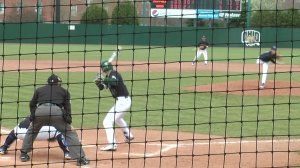 Game One began with a scoreless five innings but Buffalo pulled ahead in the top of the sixth. The Bobcats didn’t let this last long, getting a 2-1 lead in the bottom of the sixth after freshman Rudy Rott hit a single, and senior third baseman John Adryan hit it out of the park, sending both home. Ohio Junior starting pitcher, Jake Rudnicki, threw seven innings, striking out six batters and allowing only one run and two walks. The Bobcats finished the game in the seventh, extending their lead 3-1 as junior designated-hitter Spencer Ibarra smacked a double and scored off junior left fielder Mitch Longo’s base hit.

Game Two was neck-and-neck to the end with the Bobcats scoring six runs on 13 hits. Longo clutched the game-winning run for Ohio on a wild pitch in the bottom of the ninth. Adryan scored his second home run of the day and eleventh of the season, along with two RBIs. Senior right-handed starting pitcher, Connor Sitz, struck out a season-high six over five innings, allowing only four runs. Junior reliever Tom Colletti, wrapped up the last four innings, giving up one earned run on six hits.

“It was good I could help out the team today and hit two home-runs,” Adryan said. “The first one was a curve ball – I was sitting on it because he threw me like three or four and I got out because of it so I figured he was going to do it again; the second one was a fast ball and I had a pretty good swing on it.”

Longo, who ranks second on the squad with 13 multi-hit games, said he knew his team was going to win at the start of the last inning and is hopeful that their energy will carry through the rest of the season.

The series puts the ‘Cats at 14-17 for the season and 4-5 in the MAC. The Bobcats head west for Tuesday’s game against Dayton (10-21) at Time Warner Cable Stadium with first pitch at 4 p.m.

Chippewas Close out Bobcats in Extras