LGBTQ Politics and the Election 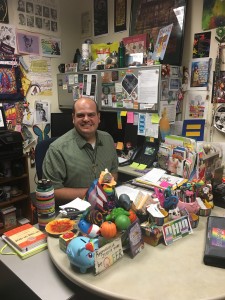 (delfin bautista, director of the LGBT Center, poses for a photo in their office in Baker 354)

Cheers erupted throughout the country in celebration of the Supreme Court decision that legalized same-sex marriage across the nation on June 26, 2015.

According to CNN, this ruling has made the United States the 21st country around the world legalizing same-sex marriage nationwide. Similar to their heterosexual counterparts, same-sex couples are able to access the same legal rights and benefits as well as be acknowledged on official documents such as birth and death certificates.

The ruling was seen as a symbolic change in society’s attitude toward the LGBTQ community. However, delfin bautista, the director of the Ohio University LGBT Center, said a lack of discussion has caused an impact on individuals in the community.

“There are impacts for the community that aren’t being discussed widely,” bautista, who uses they/them pronouns and the lowercase spelling of their name, said. “There’s just been silence which is hurtful and I think a lot of us are angry.”

The focus on marriage equality had been at the expense of other issues such as immigration and adoption, they said.

Although marriage equality has been legalized across the nation, discrimination against LGBTQ individuals is still legal in 22 out of 50 states, including the state of Ohio according to Equality Ohio.

“Ohio is one of those states where you can be fired just because you are trans or queer,” Grant Stancliff, communications director of Equality Ohio, said.

The activist group aims to achieve fair treatment and equal opportunity for all regardless of sexual orientation, gender identity or expression, according to its website.

Stancliff expressed concerns regarding the beliefs held by the Republican party platform.

“[The party] hints that trans kids shouldn’t be treated equally in schools as cisgendered kids and endorses what’s called conversion therapy which is a therapy that tries to change somebody from being gay or transgender to being straight or cisgender,” Stancliff said. “These are some of the things that we have been fighting against for some time.”

According to The Guardian, in his 2000 campaign platform, Mike Pence advocated for funds focusing on HIV/AIDS research and treatment to be diverted to fund conversion therapy treatments. There has been no evidence suggesting any changes in his opinion.

“The concern with Trump and Pence is that the literal blood, sweat, and tears of a whole group of folks is going to be undermined and devalued,” bautista said.

The work that has been done by activists to aid the HIV/AIDS crisis, marriage equality, as well as visibility and the celebration of transgender individuals could possibly be undone with the Republican party platform, , bautista said.

“It’s like we’re going backwards instead of going forward,” they said.

In his speech following the Orlando mass shooting at a gay nightclub, Republican presidential nominee Donald Trump stated he would protect LGBT individuals from “radical Islams”, pitting the LGBT community and other minority groups against each other, according to Slate.

“He’s not really talking about protecting the rights of LGBTQ people,” Stancliff said. “He is taking LGBTQ people and using them as an excuse for his own personal brand of hatred and xenophobia.”

While Stancliff views Trump’s rhetoric as apathetic towards the LGBTQ community, bautista takes a more personal approach to Trump’s comments.

“A lot of folks currently use our identities as a weapon to dehumanize us,” bautista said. “We are seen as issues [and] not a person, so that’s problematic on many different levels.”

Although the election has painted the LGBTQ community as issues rather than individual people who deserve human rights.

To bautista, the first step took moving toward progress is acknowledging the complexity of the issues at hand.

“[We have to] recognize the complexity and messiness of all of this,” they said. “There are no easy answers but we need to try something.”