This is the fourth installment of a December-long series that examines what Athens-centric tune heads have been jamming to all year long. Keep tabs on the series throughout the month here.

Home Again (his first album) came out a few years back and it was one of my favorite records of 2012. This one is an absolute classic. Danger Mouse produces and pushes Kiwanuka to make a much more interesting and fleshed out record than his debut. All the songs are really strong – most with an R&B feel. “Black Man In A White World” has already become someone of an anthem for the BLM movement. As usual, the production from Danger Mouse is perfect.

2. A Sailors Guide by Sturgill Simpson
By far the best country record of the year. Simpsons influences are undeniable: classic ’70s country — but with this record he really comes into his own. A concept record about fatherhood and his son is augmented by the Daptone horn section throughout. Modern radio country music is one big wasteland, so Simpson found his own path outside of radio and became a star this year with his first truly amazing album.

3. Black Star by David Bowie
I really didn’t think Bowie had another truly great album left in him. He hasn’t really made an album worth listening to straight through since Let’s Dance (Yes, I love that album). That was 1983. This doesn’t sound like anything he has ever done except that it relies on a lot of experimentation like much of his ’70s work. It was so sad to lose such a great artist especially after he got back on track after all these years.

4. A Man Alive by Thao & The Get Down Stay Down
I had never even heard of this band until this year. This is forward thinking guitar pop/art music which really gets under your skin after a few listens. It’s a bit of a departure from previous records with Merrill Garbus from the Tune-Yards producing and focusing much more on the beats – she is a perfect choice for production. The guitar and beats really complement each other and the song writing chops of Thao make this an incredibly catchy record.

5. Pearls To Swine by Adam Torres
It’s been eight years since Torres released his first album, Nostra Nova. I wasn’t sure exactly what to expect with this one since it’s been such a long time. Pearls To Swine sounds almost nothing like that first record. This is much more stripped down and ambient. The songs are absolutely gorgeous. This is one of those quiet records that sounds absolutely breathtaking played loud. Hopefully, more people will finally catch on to this brilliant artist.

6. We Got It From Here. . . Thank You For Your Service by A Tribe Called Quest
Rock ‘n’ roll and hip-hop are usually a young person’s game. There are few truly great rock or rap albums made by middle aged artists. This is a big exception. It sounds like A Tribe Called Quest picked up where they left off musically in the ’90s with somewhat of a modern feel – although all of their output from the ’90s still sounds incredibly fresh. The lyrics are a bit dark and seem to focus mostly on politics and the mood of the nation in 2016.

7. Heads Up by Warpaint
This sophomore album by Warpaint is more subtle than their first record with much more focus on the rhythm. It still manages to keep the melancholy feel of their first album but also manages to make your hips swing a bit.

This guy is all over the place musically. He seems to be channeling the spirit of Prince and Stevie Wonder with much of it. Funk vamps, hip hop, rock, gospel and soul all sound great side by side each other with lyrics that will make you think a bit.

9. Adore Life by Savages
Feminist “punk” rock with a really fresh feel thanks mostly to the amazing guitar work of Gemma Thomson. She is the star of this record and pushes herself to find the perfect part for each song. I use the term “punk” loosely because even though they are greatly influenced by punk, they all have a proficiency of their instruments that most punk does not have. So even though the anger and feel of punks past is present here, they take it a lot further with their great chops.

11. Schmilco by Wilco
These days people seem to overlook Wilco. They’ve been around over 20 years but they have never made a bad record. They are so consistently good that I think people just expect another great record every time around. They never disappoint. They are either good or great. This one leans more towards the great. This is an “acoustic” companion piece to last years Star Wars album, which let the guitarist Nels Cline go into territory on a Wilco album that he had never been before. It’s twisted and weird and dark and not what one would normally consider “acoustic.” But it’s wonderful.

12. Day Breaks by Norah Jones
Jones has turned into an artist that always is pushing herself to do something new. She lost many of her fans over the years who just wanted to hear her do that first album with every new release. This really endeared me to her. This was actually supposed to be her “back to basics” album which was supposed to sound like her first record. It is probably the closest thing she has done to her first record but it’s certainly not her first record. This is much more mature, a bit weirder, and much more interesting.

13. Nothing More to Say by The Frightnrs
New retro reggae music from the Daptone label. Although I’m not a huge reggae fan, this is such a great album that I couldn’t pass it up. The melodies are so strong and the playing so good that even on the first listen the songs are undeniable and hard to shake off.

14. Coloring Book by Chance The Rapper
This is a modern day Gospel record by way of hip-hop. Chance tries to figure out his world through seeking and praising God. It is very forward thinking and vulnerable – especially for rap lyrics. The sounds and beats he uses sound like nothing else out there – he is an incredibly unique artist.

15. Ambulance by The Amazing I love brooding, melancholy guitar records with mopey singers. This is the perfect album for you if that’s your thing as well. Nick Drake and The Velvet Underground come to mind as does The Smiths. Every song is a winner. 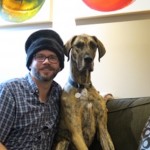 Chris Pyle is one of the owners and operators of Donkey Coffee and 3 Elliott Studio.