While guns are not the leading cause of death by a long shot on college campuses, that fact doesn’t seem to influence the debate over the right to bear arms.

In mid-December, 2016, Ohio Governor John Kasich signed Senate Bill 199 into law.  The law allows concealed firearms on college campuses and at daycares, if approved by college trustees or business owners.

Ohio and 23 other states leave the decision to ban or allow concealed weapons up to individual colleges and universities.

Michael Newbern is a member of Students for Concealed Carry. It’s a grassroots organization that advocates for the right of a licensee to carry a concealed gun on a college campus.

Newbern is helping OU students restart an Ohio University chapter of this organization – Bobcats for Concealed Carry.  When asked what is stopping students from bringing a concealed weapon on any campus, Newbern said, “Nothing [except] their own moral compass, and a piece of paper stating they shouldn’t do it.  And the fear of being caught.”

When Senate Bill 199 became law, Ohio University’s student senate called for a referendum on the issue. They asked students to vote  “for” or “against” the Board of Trustees allowing concealed carry on OU’s campus.

Interestingly, only the main Athens campus voted against guns.  Students on the Chillicothe, Eastern, Southern, Lancaster, and Zanesville campuses overwhelmingly voted to allow guns on campus. Another point to note is that only 6,940 students voted in the referendum out of a total of more than 30,000 students at all six campuses. 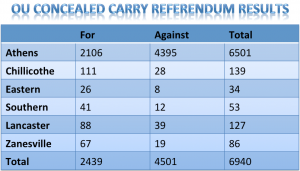 “I just don’t think taking someone’s life or having the power to take someone’s life should be in the hands of a 21-year-old,” said Deering, a sophomore at Ohio University.

While the majority of Ohio University students voted against concealed carry on campus, the final decision will be up to the Board of Trustees. Trustees are expected to vote at their next meeting in mid-March.

According to a survey by Cleveland.com most state and private colleges in Ohio have decided to make no changes to their current policies that do not allow guns on campus.  Hocking College, located just 15 miles from Athens, announced last week it would not allow campus concealed carry.

“You have to be 21 years of age, felony-free record, no crimes of violence no drug offenses, and you have to go through an eight-hour course and they’ll go over the laws of what to do at a traffic stop,” Sheriff Smith explained. “You have to show that you’re competent with a weapon, that you can load it, unload it, show that you can shoot accurately, and then you come in here and we issue the concealed carry permit.”

Smith says Athens county does not see a lot of crime because of guns. The sheriff’s department issues more than 600 concealed carry permits in the county.  Smith says there may be one or two instances per year when Athens Police must revoke a permit and make an arrest.

“We see very little occurrences where we have to deal with someone who does have the conceal carry permit,” said Smith.

John Euler has handled guns for nearly 50 years and has been in the U.S. Army for 22 years. He is also the range safety officer at Hilltop Gun Club in Albany, Ohio.

“Concealed carry to me is self-defense. That’s why I carry concealed,” he said.

Despite his strong stance on guns, he does not believe concealed carry should be allowed on college campuses.

“I think the maturity level isn’t there yet. I don’t think the students have fully developed in maturity to be able to know necessarily when to and when not to use it. There’s a lot of partying going on in colleges. That’s just a fact of life. There’s a lot of- you’re still growing up so tempers flare very easily, things are misconstrued as to what’s said or done. I just think it’s a formula for disaster on a college campus. People just drawing them when they should,” he said. 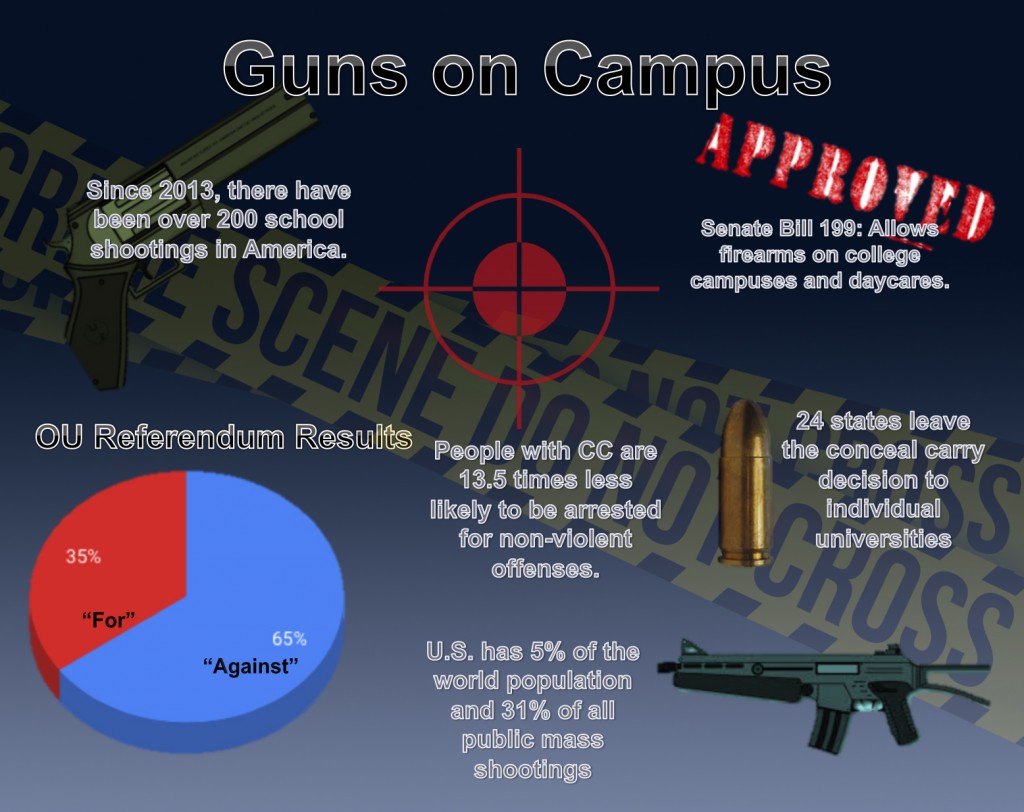