The Vinton County Vikings traveled to a Zane Trace High School to take on the Bloom-Carroll Bulldogs to start their season.  The Bulldogs came out victorious, defeating the Vikings 62-51. 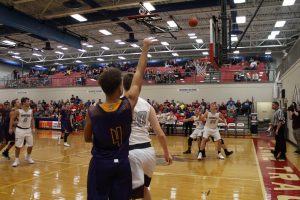 ned from the middle of the first quarter to halftime.

Turnovers and missed three point shots also really hurt the Vikings the entire game. Jake Speakman had 10 of the teams 17 turnovers that lead to fast break plays for the Bulldogs.

The three point shot wasn’t dropping for the Vikings tonight either, as they shot a combined 3/19 from downtown for the game.

Senior Naylan Yates came in as an important player on this team, but he struggled all night long. He had 11 points and went 4/14 from the field and 3/12 from three. Naylan seemed hobbled throughout the entire game.

Yates seemed to have a leg injury, and Vinton County coach Matt Combs confirmed this observation after the game, explaining that Naylan “was not moving the same way he normally does.”

Bloom-Carroll’s sophomore Josiah Brown had a huge game helping the Bulldogs pull ahead of the Vikings, as Brown poured in 25 points for the game and a late game dunk that put a dagger in the Vikings for the night.

The VInton County Vikings will look to rebound when they face Nelsonville-York on December 8th.