AMERICAN EXPERIENCE Into the Amazon
Premieres Tuesday, January 9, 2018 on PBS 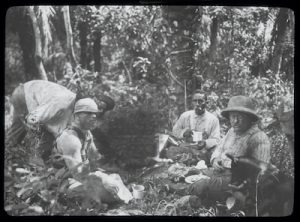 Into the Amazon tells the remarkable story of the 1914 journey taken by President Theodore Roosevelt and legendary Brazilian explorer Candido Mariano Da Silva Rondon into the heart of the South American rainforest to chart an unexplored tributary of the Amazon River. With six American adventurers, including his son Kermit, Roosevelt spent eight harrowing weeks in one of the most remote and inhospitable places on earth, battling tenacious insects, deadly rapids, fever, hunger and exhaustion on a quest to map an unknown river in one of the wildest and most beautiful places on earth. What was anticipated to be a relatively tranquil journey turned out to be a brutal test of courage and character. Before it was over, one member of the expedition had drowned, another had committed murder and a third was abandoned to perish in the jungle. Roosevelt would badly injure his leg and beg to be left behind to die. More than a dramatic story of adventure and survival, Into the Amazon shines a light on two of the western hemisphere’s most formidable men and the culture and politics of their two formidable nations. Filmed on location in the Brazilian Amazon, the film features the voices of Alec Baldwin as Roosevelt, Wagner Moura (Narcos) as Rondon and Jake Lacy (Girls) as Kermit Roosevelt. Written, produced and directed by John Maggio and executive produced by Mark Samels, Into the Amazon premieres on AMERICAN EXPERIENCE Tuesday, January 9, 2018, 9:00-11:00 pm on PBS.

“The Amazon jungle eats whatever comes its way. There’s just a way in which the insects and the bacteria and the worms, the whole environment consumes whatever moves through it.”
– historian Clay Jenkinson

On January 21, 1914, a 55-year old Theodore Roosevelt set off on a joint American/Brazilian expedition to map a mysterious Amazon River known only as the River of Doubt. Along on the journey were a small band of Americans, more than 140 Brazilians hired by Rondon to transport the expedition’s cargo, 110 mules and 70 oxen. Still reeling from a crushing defeat only 15 months earlier when he failed to win a third term as president, Roosevelt had embarked on the journey hoping to cast aside thoughts of the election and test himself in the manly world of adventure that had sustained him throughout his life. His wife, Edith, fearful that the loss had left her husband in a reckless state of mind, was reassured when their 25-year-old son Kermit decided to accompany his father into the jungle. 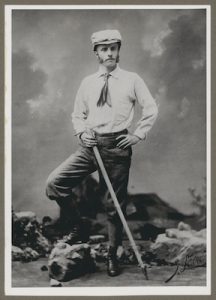 The expedition was plagued with trouble from the outset. The Americans had arrived with a mountain of baggage that Colonel Rondon’s men soon found necessary to abandon along the trails. Temperatures of 100 degrees and insufferable humidity set the Americans on edge, and mosquitoes, blood-sucking sandflies and sweat bees were a constant plague. Malaria and dysentery spread through the expedition. “The very pathetic myth of ‘beneficent nature’ could not deceive even the least wise if he once saw for himself the iron cruelty of life in the tropics,” wrote Roosevelt. With each passing mile, the expedition moved farther from civilization into a land that would test their endurance and character and a river that would carry them deep into the unknown.

En route to the river, the expedition followed a path carved through the jungle 10 years earlier when Rondon had been commissioned to build a telegraph line into the rainforest. During that journey, Rondon, part Amazonian Indian himself, had formed a bond with the indigenous tribes who dwelt there. “Rondon thought Indians should be treated with kindness,” says Brazilian anthropologist Mércio Gomes. “They have been violent because people have been violent to them. If you are not violent to them, they will be kind to you.” Rondon’s attitude stemmed from the philosophy of positivism, which taught that social progress for Brazil’s indigenous people could only be achieved through peaceful means and the slow introduction of modern civilization. Rondon’s actions were in stark contrast to Roosevelt’s belief that native peoples should not be allowed to indulge in their tribal ways and that it was the mission of the white man to civilize the world.

On February 27, more than a month after the expedition set out, they dipped their paddles into the River of Doubt for the first time. Tangled vines threatened to capsize canoes, and piranha and anaconda filled the waters. Unexpected rapids and waterfalls forced the men to abandon the river and cut a path through the jungle, carrying their boats and equipment with them. The grueling portages exhausted the men, while Rondon’s insistence on making a detailed survey of the river — the expedition’s original purpose — slowed their pace and added to the tension. As food supplies dwindled, they also began to spot evidence of Indians along the shore. Fearful for the lives of his son and the other men, Roosevelt lost all patience with Rondon’s delays. One month later, a deep cut on Roosevelt’s leg became infected. Wracked with fever and the onset of malaria, Roosevelt begged to be left behind to die, but Kermit and Rondon refused to go on without him. 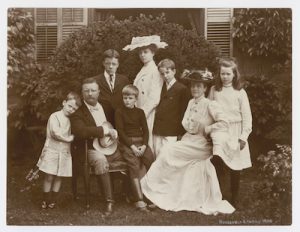 In the end, Theodore Roosevelt survived to tell the tale of his greatest adventure yet. On April 26, after paddling more than 400 miles, the expedition reached the mouth of the River of Doubt, which had claimed the lives of three men and nearly killed Roosevelt. It would henceforth be known as the Rio Roosevelt.

“The story of the Roosevelt-Rondon expedition is both inspiring and deeply cautionary,” said author Louis Bayard. “It shows that human enterprise has its limits. There is no more formidable example of willpower than Teddy Roosevelt. But he didn’t tame that jungle, he didn’t domesticate it, he just survived it. And even he, at the end, had to acknowledge his limitations. And as soon as they left, the jungle folded round and eliminated every last trace that they had been there.”

Much of Into the Amazon was shot on location in the Brazilian Amazon, on the Ariau River, a tributary of the Rio Negro. A dark, serpentine river surrounded by jungle, it has many geographic similarities to the actual River of Doubt. To capture the enormity of the rainforest landscape, director John Maggio had a 20-person crew on the river, a second unit drone team, and used delicate camera equipment floating just inches above the water. Local Brazilians — many of them descendants of indigenous people — worked in front of the camera as extras and behind the scenes as animal wranglers, canoe carvers and guides. They provided the producers with local remedies for stomach problems, insect bites, cuts and skin infections and helped them steer clear of anaconda and caiman (a Central and South American alligator). In total, the production team spent three weeks in Brazil, often in 100-degree heat and humidity and daily downpours. “Shooting on location in the Amazon was grueling and brought us even closer to Roosevelt’s original expedition,” Maggio said. “Even with all our modern technology we were still subjected to the treacherous conditions of the Amazon basin and just like Roosevelt’s team our fates were in the hands of our very skilled Brazilian guides who expertly navigated us through the jungle.”

Additional shooting took place in the Jarabocoa region of Dominican Republic, where the producers found powerful rapids similar to those on the River of Doubt. Guided by a local whitewater rafting team, the filmmakers shot the dramatic gorge scene with a dozen extras and expert climbers to lower the bulky canoes over the 50-foot falls.

About the Participants, in Alphabetical Order

Louis Bayard is the author of the novel Roosevelt’s Beast, a reimagining of Teddy and Kermit Roosevelt’s ill-fated 1914 Amazon expedition.

Kathleen Dalton is the author of Theodore Roosevelt: A Strenuous Life.

Todd Diacon is the author of Stringing Together a Nation: Candido Rondon and the Making of Modern Brazil.

Carlos Fausto is associate professor of anthropology at the Museu Nacional (Universidade Federal do Rio de Janeiro) in Brazil.

Mércio Gomes is a Brazilian cultural anthropologist who teaches at the Universidade Federal do Rio de Janeiro.

Joseph Ornig is author of My Last Chance to Be a Boy: Theodore Roosevelt’s South American Expedition of 1913-1914.

Sydney Possuleo is a Brazilian explorer, social activist, and ethnographer who is considered the leading authority on Brazil’s remaining isolated indigenous peoples.

Larry Rohter is a former New York Times journalist and author of Brazil on the Rise: The Story of a Country Transformed and an upcoming biography of Candido Rondon.

“The Swamp” on AMERICAN EXPERIENCE | Tuesday, January 15 at 9