A small gaggle of reporters points their microphones at reproductive rights activist Marcie Crim as she bluntly decries  the shrinking access to abortion in the region. Crim stands just a few feet from the open door of the office of Governor Matt Bevin near the Capitol rotunda.

Crim and Bevin may be physically close in this situation, but they could not be further apart on the issue. They personify the opposing poles of the decades-old debate surrounding abortion.

Bevin has been vocally supportive of legislative restrictions on abortion access such as longer waiting periods.

He said in his end of the year review of his administration’s accomplishments for 2017 that such measures support women and give them time to make the right choice about their pregnancy. 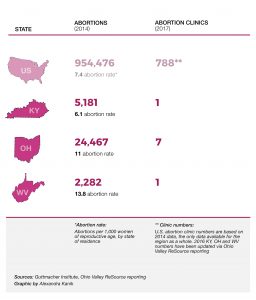 Crim said during her press conference such restrictions will cost women their lives as they return to the self-abortion methods of the past.

Abortion clinics across the region, and across the country, are closing following a record wave of legislative restrictions in 2017. The non-profit Guttmacher Institute, which researches reproductive health access and laws, found that in the last year 19 states adopted 63 new restrictions to abortion, a sharp increase from the 28 similar measures enacted in 2016.

Legislative and financial pressures are having a result. Half of Ohio’s clinics have closed. Kentucky and West Virginia each have a single clinic.

Crim and other advocates say they are helping more women to navigate the ever-more complicated process to access what they call basic health care.

After the press conference the crowd roared as Crim introduced herself as head of the Kentucky Health Justice Network, a non-profit abortion support fund. They chanted “We Are Kentucky,” and “Vote Them Out” through the hour-plus rally. The very few legislators who paid any attention did so from across the wide building, peering down briefly from just outside the Senate chambers.

This rally drew about 200 people and is an annual event. But Crim said in a separate interview that the hardest work is solitary and done out of the spotlight.

“We are transporting people in secret because they are so ashamed of what they are doing. Our role is to take the shame out of that. One out of three people who can get pregnant have an abortion by the age of 45.”

Crim talks often about her own abortion. She said the response is nearly always the same.

“The amount of people around me, friends, family members who have known me for years will say, ‘Oh my God, me too’.”

The Supreme Court legalized abortion in the 1973 landmark decision, Roe v. Wade. Crim says since before that time, volunteers across the region secretly drove women far as New York for abortions. Today as access shrinks the demand for help grows.

Although there had long been volunteers, the Kentucky Health Justice network was formed in  2013, securing a non-profit status and funding from a national organization. There are 44 states with abortion support funds.

“We have 40 volunteers who drive crisscross across the state.”

Volunteers are always on alert, she said. They are careful to make sure that the woman really needs assistance.

Nicole is a Kentucky Health Justice Network volunteer. She works with several women at a time helping them figure out logistics. Some cases are simple. The woman can’t make the whole payment or doesn’t have a ride to the clinic. 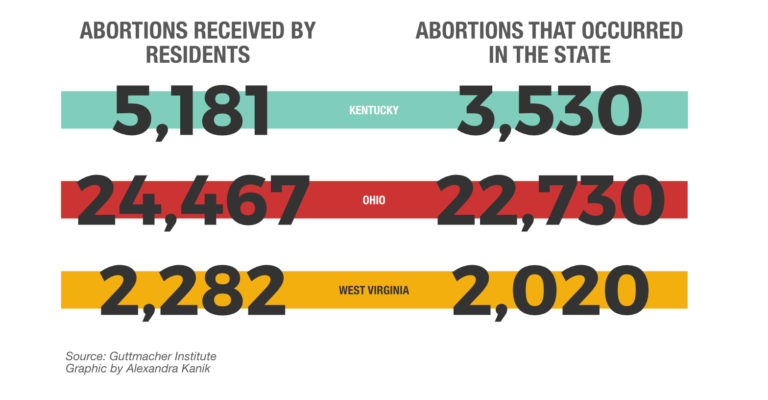 Others, she said, are very complicated. A current case involves a refugee who doesn’t speak English and who comes from a conservative country. That means finding not just a translator but a non-judgmental translator who can be trusted to present accurate information.

Nicole is one of the few Health Justice Network volunteers who will talk to the press. But she still asked that her full name not be used because of what she calls the zealotry of those opposing abortions. But she said it’s important to talk about how what seem like simple steps to change the abortion process can have a big impact.

An abortion in Louisville will cost about $800 on average and lodging and travel can add hundreds more. Nicole said every new law increases the price. 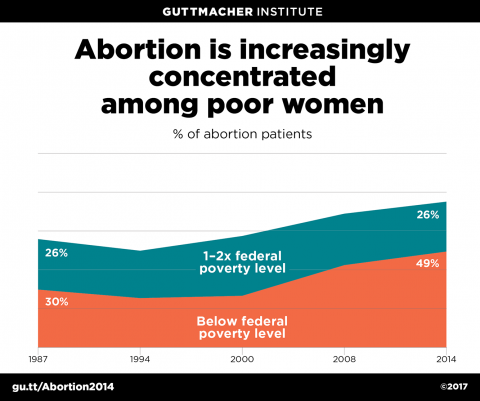 “It’s because these little laws have been passed like the ultrasound law, the bans, the fact that they can’t take Medicare funding, they can’t take insurance,” she said. “They don’t have any other options but to pass those costs on to the patient.”

And she said most often it hurts working class and poor women who can least afford it.

“There is no clearer connection than access to reproductive care and economic status,” she said.

Chrisse Frances runs Preterm, Ohio’s largest abortion provider and one of the largest such organizations in the country.

“One of the things we are trying to do is change the national conversation on abortion because so many women get abortions, but they never talk about it,” she said. So we are being out loud and proud.”

Too often, she said, the only people talking publicly about abortions are politicians who oppose them.

To change that, she said, slogans like “End the Silence, End the Shame” are going up on billboards in Ohio and across the country.

She also said that journals are left in the waiting rooms at Preterm clinics so patients and their partners can share their experience with abortion. Those stories have been shared online and in public events where they are read aloud.

Those events, she said, “have been very powerful.”

Such events, she said, can help change the national conversation about reproductive rights. But she doesn’t expect that to happen anytime soon.

“We are in this for the long game,” she said.

And 45 years after the Supreme Court decided Roe v. Wade, there’s still a long fight ahead.