A Familiar Place, 3,000 Miles Away: a Student’s Words on Traveling Abroad

It had been just shy of a year since I first set foot in London for my 2017 study abroad experience when I had the fortunate opportunity to visit again. Instead of a full semester, this time I had just a one week to stroll the British streets. It was the perfect length of time to make me feel both cheated and eternally grateful. Since it has become a city so dear to my heart, I knew how meaningful it would be to return, but I also knew the endless list of things I would feel compelled to do. Of course there’s just never enough time.

Since I last left London in early May I have felt, to say the least, changed. My study abroad was a Fine Arts program through Ohio University which proved to be an intense and immersive cultural experience. I can say truthfully that I learned more in those three months than I had in my previous 15 years of schooling. It was set up like this: in a room of 12 students and one professor, each morning we would sit on couches, drink coffee, and discuss the world around us. The classes were, by definition, focused on music and visual art, but in reality they encompassed everything from economics to politics, history, technology, and philosophy.

In the afternoons and evenings we would go to musical concerts, theatre performances, dances, art galleries, history and art museums, libraries, films, markets, etc., and experience the culture and history of one of the most prominent international cities in the world. Then each morning we would reconvene on those couches to hash out our experiences and discuss.

Each day was hands-on, interactive and personal. Each lesson was discussion-based and profound. In those three months I learned to become a more critical thinker, speaker, and listener. I read more extensively than I have in years, and I was constantly experiencing things first hand. The classroom atmosphere was exceptional, and so too, were the streets of such a large and diverse city.

Between classes and performances I would embark on different walking paths to familiarize myself with the place. Sometimes I had company, sometimes I was alone. On these walks I would catch bits of foreign passerby conversations, or see people and cultures I’ve never known. In a matter of five minutes I could hear 10 different languages, walk past food shops and music venues of different tastes and sounds, and glimpse architecture hundreds of years old.

On one street I would walk by massive and richly intricate castles, palaces, and cathedrals, and on the next, pass through paths of rubbish and groups of homeless people bracing the cold. I was experiencing human realities I don’t think I quite understood until then.

My surroundings were at once hugely inspirational and romantic, and also confusing, philosophical, and desperate. Here I was, a 20-year-old American, living in the Old Country, and experiencing the often harsh realities of humanity, the spirituality of art, and the many lessons of travel. I was changing perspectives rapidly.

I was questioning my place in the world.

So when I left London, it was with tears in my eyes and a fear for the future (a Donald Trump America for one) and the thought that I would lose my traction as a thoughtful, engaged, and internationally minded human. I came to adopt the idea that the most necessary and responsible action a thoughtful person can do is travel. I didn’t want to come home.

So when I got news that my boyfriend had received a financial grant from the University to travel to London for research, of course I was going to tag along.

The two of us came back to London and experienced intense and emotional memories (he had gone on the study abroad trip too), but it was nothing I didn’t expect. What surprised me, however, was the strong sense of familiarity and sameness I felt with the city. It was as if time hadn’t passed, as if we had been in London always. We visited our old flat, our favorite pubs and restaurants, and went to our favorite museums. We started saying cheers again. It all felt natural. 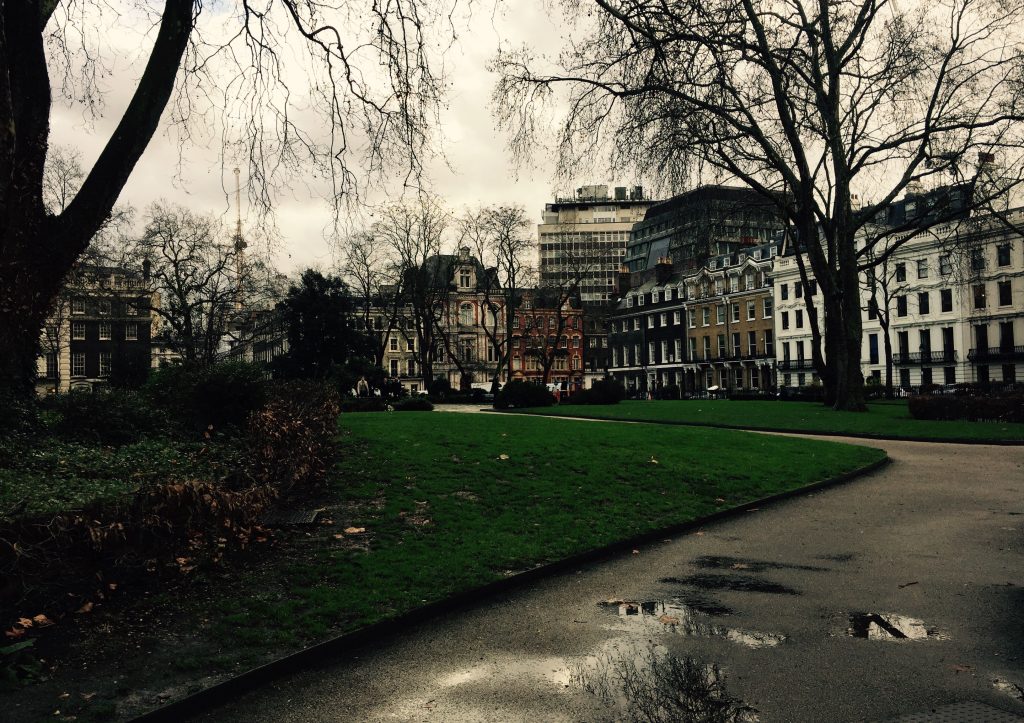 I realized then that my fear of leaving the first time was misguided. I never lost traction from that experience. I didn’t become less thoughtful or engaged when I came home.

I had this silly and romantic idea that when I came back to London I would gain some sort of enlightened and spiritual understanding. I had a bit of a stressful past semester, and I thought a trip to London would have all the answers. After all, it had taught me so much once before. Instead, as I was walking through Russell Square one morning (a small and lively park in my old neighborhood), I realized that London isn’t the mecca or reason for all goodness and intelligence in my life. Rather, London is just my personal stomping grounds for the connective understanding of what it means to grow older. Of meeting new people and experiencing new ideas. Coming back simply felt like coming home; comforting, familiar, and warm. While this place has taught me lessons and opened up my eyes, it wasn’t magical or perfect. It was simply my first great “a-ha” period. We all have such a place, or time in our lives when we feel like things are starting to make sense. It’s a peculiar type of confidence that makes us hopeful for the future. Or better yet, happy in the present.

Mine just so happened to begin taking form inside a pub in central London, over a plate of fish ‘n’ chips.

OU Provies Opportunities For Both International And American Students

OU Provies Opportunities For Both International And American Students

A Guide To Studying Abroad At Ohio University

A Teacher Abroad: a Profile of Ethel Sefako Anyani-Boudum