Trimble Tomcats Survive Upset And Claw Their Way To the Convo

The South Gallia Rebels had the No. 1 seeded Tomcats on upset alert headed into halftime.

Hixson responded with 34 of his 38 points in the second half to survive the Rebels’ scare 71-58.

Hixson has been the engine that drives this Tomcat team all season long and he’s driving them into the Convocation Center next week. 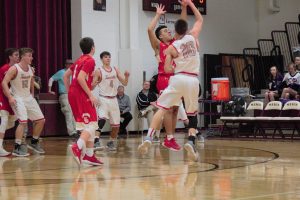 The Tomcats were off to a slow start in Meigs.

This match up was looking like an upset as Trimble went into the locker room trailing South Gallia 26-22.  Things would have to change in the Tomcats’ game plan if they wanted to have a chance to advance and play at the Convocation Center.

Whatever head coach Howie Caldwell told his boys in the locker room helped them turn the tide of the game and they came out electric.

By the end of the third quarter the Tomcats took the lead 43-41 and the Rebels couldn’t match the momentum.

In the end, Trimble outlasted South Gallia 71 to 58, ending the Rebels’ season.

South Gallia led the first half but the Rebels were no match for Randy Hixson’s star shooting in the second half. Hixson put 38 points on the board for the Tomcats. He made 13 out of 14 free throws and put up five three-pointers.

Braden Weber stood out in the first half for the Tomcats and had a total of 13 points by the end of the game. Another key player for Trimble was Max Hooper. He helped his team out by securing 10 rebounds and five assists.

Eli Ellis of the Rebels had an advantage over the Tomcats with his height. He had five rebounds and 12 points.

South Gallia’s advantage came from the three point line where the team made a combined 10 of 18 three-point shots.

Tomcats are still clawing their way through playoffs. Their next game will be on Sunday at 5:30 at the Convocation Center against fifth seeded Green High School located in Uniontown.