Students vs. Landlords: Who has to Fix Problems?

Do you understand all parts of your lease?

A lease is the legal document detailing what tenants and landlords are responsible for during a rental agreement; a document many Ohio University students will sign.

This document outlines the rental term, payment due dates, and the liabilities of the landlord and the tenant. Often students will sign for a home a year or two in advance to ensure they’ll have a place to live, later finding issues with the property and landlord.

Creaky floors, drafty doors and mold are some of the many problems tenants complain to their landlords about.  And although they may be annoying, these are not code violations, meaning the landlord is legally not required to fix these issues. The city of Athens’ Code Enforcement does however require landlords to disclose any pre-existing problems to the tenants.

Do tenants have reason to be upset?

Renter Ben Devol doesn’t think so. He lives with Bryson McGillis and their three roommates on Palmer Street, but Devol has professional experience dealing with tenants. During his tenure at Best of Athens Rentals, Devol dealt with renters and their complaints on a daily basis.

“I’ve come to the conclusion that a lot of people, take situations and blow them out of proportion,” Devol said, “but I definitely think, depending on the situation, it needs to be followed up in a timely manner and other situations. I’m sure you can decide on whether or not it’s a clear thing that needs to be taken care of at the moment.”

Though Ben and his roommates have had a positive rental experience, they believe landlords should be proactive when dealing with their properties.

What Does the City Code Require?

Athens Code Director Rick Sirois and his three other code enforcement officers focus on health and safety during inspections. Taylor Rohrig and her two roommates, Adriana Navarro and Matt Skidmore have had concerns about their health and safety since they moved into their house in May of 2017. The roommates gave Code Enforcement a call after finding out their house was not on the list of houses inspected.

“Our house was actually not listed underneath the inspection sheet,” Skidmore said, “and that’s originally what made us go to code. The fact that our house was not anywhere to be seen on this past year’s inspection list from code themselves.”

We did a walk through of Rohrig’s home. She showed us many of the issues Code Enforcement required her landlord to fix after their inspection. The maintenance crew fixed the health and safety issues, but after one issue was resolved, another one arises.

Rohrig showed us the messily laid grout used to fuse the gap between the kitchen walls and the tile on the ground.  A downstairs bathroom door was replaced, but with a door that didn’t fit, leaving them with open space between the door frame and the wall. Not to mention, the bathroom door lock was put on the wrong side, making it possible to lock people inside the bathroom.

Rohrig and her roommates understand that it’s off-campus housing target for students, and they didn’t sign this lease expecting luxurious living, however she doesn’t think that the house is worth what she pays.

“I would be less mad if our rent was like $300-$400,” Rohrig said. “The fact that this is a $500 house that even with all the issues, they’re not willing to bring it down and they’re bringing it up for the next people. That’s what really makes me more frustrated than anything else. You know they’re just taking college students for what they can get.”

This house did not pass inspection, yet Rohrig and her roommates will pay $24,000 between the four of them by the end of their rental term, plus utilities.

“We don’t have anything to do with the relationship between the tenant and the landlord,” Sirois said, “but if the tenant follows the right steps, we are here to help.”

What happens if you don’t follow the right steps?

The key part of Sirois’s statement: “if the tenant follows the right steps.” Tenant Ethan Gower decided to withhold paying rent because of multiple issues ranging from leaky sinks, toilet cracks and no heat in the home. Gower, who rented from the same company as Rohrig last year said he dealt with no heat – a blatant health concern – all winter long.

Sirois watched our interview with Gower and said, “Now when it comes to heat, we would’ve documented that… This obviously is a health issue, and we would’ve immediately responded to this.”

If maintenance issues are present 30 days after the renter first alerts the landlord of the problem, tenants can withhold rent from their rental company, but they have to follow a process. Gower withheld his rent without giving it to a lawyer, and that was grounds for the rental company to sue him and win.

Renters who choose to withhold rent when maintenance issues aren’t resolved can go through escrow. Renters may not keep the rent money themselves, they have to give it to a third party – a lawyer – to legally pressure the landlord. Rick Sirois expresses how important documenting the issues is in the process.

What can you do to avoid landlord and maintenance issues?

First, as Sirois said, document everything. As soon as you move in, write down and take pictures of anything that looks like it could cause problems in the rental unit. 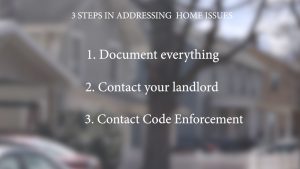 From there, contact your landlord. Show them your documented issues through email or in-person, Code Enforcement is not able to do anything unless you talk with your landlord first.

If the landlord does not give a reasonable response within two weeks, then contact Code Enforcement. A code officer inspect the unit together with your landlord company to uncover all the possible violations.

Although student renters have stories to tell, theirs is not the only perspective in the narrative. Ethan’s previous landlord did not respond to our attempt for an interview.

Kristi Goldsberry is a landlord who strives to upkeep her property to avoid maintenance issues.

“In your lease, and all leases are different, mine are structured so that the tenant is required to contact me within a certain amount of time if there is a problem,” Goldsberry said.

Goldsberry has had her real estate license for more than twenty years and has owned commercial properties for the majority of that time. She recently opened a new apartment complex located on Carpenter Street called The Flats. Goldsberry understands her responsibilities as a landlord because of her experience owning other commercial properties.

“The lease is structured so that you have to call me and then I am required by law to follow up and make sure it gets done,” Goldsberry said. “But if a tenant does not call, and they’re required to according to their lease, then they’re responsible for all the damages that occur. So it’s real important to have that specified in your lease.”

Despite common perception, landlords do have to take care of problems that arise on their property.

“You’re required as the landlord per your lease and per the Athens city code requirements to keep your property up to code,” said Goldsberry. “If the landlord does not respond the tenant should then go to code enforcement and go directly to them and say, ‘Look I reported this to my landlord. They’re not doing anything about it we’re really concerned this is a safety issue can you please come and inspect?’ That is their right they’re allowed to do that. And then a landlord is more apt to listen to a code inspector, but then they are still given, depending on the violation, up to thirty days to correct the issue.”

The ultimate goal for students looking to find a place to live off campus is to find the best available place.

In order to find the right fit for you and your future roommates, there are some common steps renters can take.

“Read through the whole contract. Know what you’re signing for, I guess,” said Brian McGillis.

“I think that probably talking, not necessarily to a lawyer but, getting some outside real estate help would probably be a good step before signing a lease,” said Ben Devol.

“Look at the lease before you sit down to sign the lease. Ask for a copy of the lease,” said Goldberry. “Review it show your parents. You know, make sure you have good roommates. Do not just go into a lease with anyone cause you just met them at a bar the night before. These are your roommates. They’re gonna be with you for a whole year make sure they’re good, solid people.”