When former coal mine employees in western Kentucky faced arraignment Wednesday on federal charges that they conspired to falsify the required monitoring of coal dust, the hearing brought renewed attention to the region’s surge in black lung disease.

The case highlights the many challenges miners face in the workplace. And health officials in black lung clinics say sick miners also face an increasingly Byzantine bureaucratic process that determines if those afflicted with the lung disease receive benefits.

The eight employees at the now-bankrupt Armstrong Coal Company, including safety directors, a superintendent and foremen at two mines, pleaded not guilty. The federal indictment announced in July accuses them of fabricating dust tests, placing dust monitors in clean rooms instead of actual workplaces, and submitting results from days when the mine was not operating.

“There is a record, there is a paper trail, there were oftentimes comparisons that didn’t make sense,” Coleman said at a press conference announcing the indictment last month. “Numerical assessments, testing results coming back from mines when the mines weren’t even open, weren’t even operable.”

Many miners say this type of cheating is common. But federal indictments for cheating are not. That’s because miners don’t like to bite the hand that feeds them. Federal inspectors had to rely on whistle blowers who reported that supervisors with Armstrong were cheating on dust testing equipment.

“It’s unusual for one of these to move to prosecution,” Coleman said. “It shows the gravity of the conduct — of the willfully knowing conduct. The number of individuals involved is unusual, this whole matter is unusual.”

Neither the prosecutor or defense had any comment after the arraignment hearing. But the case has lots of other people in Western Kentucky’s coal mining region talking about the many difficulties miners face.

Tommy Vandiver from Nortonville, Kentucky, said he saw lots of cheating in his 21 years working as an underground coal miner. He said often the only times dust was properly controlled was when government inspectors were present.

I met Vandiver at a black lung screening event in Earlington, Kentucky, where he and other miners can get chest X-rays and other medical monitoring. He said he worked at the active face, one of the dustiest areas in an underground coal mine.

“It’s a bad situation on your lungs and a scary situation,” Vandiver said. “You just in the dark a lot of times, guessing.”

He’s hoping to qualify for federal black lung benefits, but he’s already been denied twice. Vandiver said he received state benefits for four years in 1991, but then they expired.

The coal fraud case has put the focus on industry cheating as a possible factor contributing to the recent surge in black lung cases.

“I hope to God nobody did that,” Donald Givens said. He’s a radiologist and director of the Coal Miners’ Respiratory Clinic in Muhlenberg County, Kentucky. Givens said he can’t imagine someone in a position of authority in a mine putting workers at risk. “I couldn’t sleep at night knowing that I exposed people to stuff that was potentially really harmful.”

Givens said miners like Vandiver face new challenges beyond the dusty workplace. A recent change in Kentucky law could make it more difficult for miners with black lung to receive benefits.

A change to the state’s workers’ compensation law bars radiologists from providing diagnoses for state benefits claims. Clinicians who are certified to read chest X-rays for work-related diseases like black lung are known as B-readers. Among those, radiologists are considered to be the most qualified, since their training centers on reading X-rays. The legislation requires B-readers to also be certified pulmonologists.

“Somebody decided that only pulmonologists could interpret the chest X-rays,” he said. “If you go to any hospital anywhere a radiologist reads 100 percent of just about everything done at the hospital.”

Givens said this comes at a time when his clinic was helping to clear a backlog of more than 500 miners trying to apply for black lung benefits. He said some of them were waiting over a year just to be tested.

“So in my opinion now you’ve bottlenecked something that was just starting to get caught up and everything running smoothly,” Givens said. 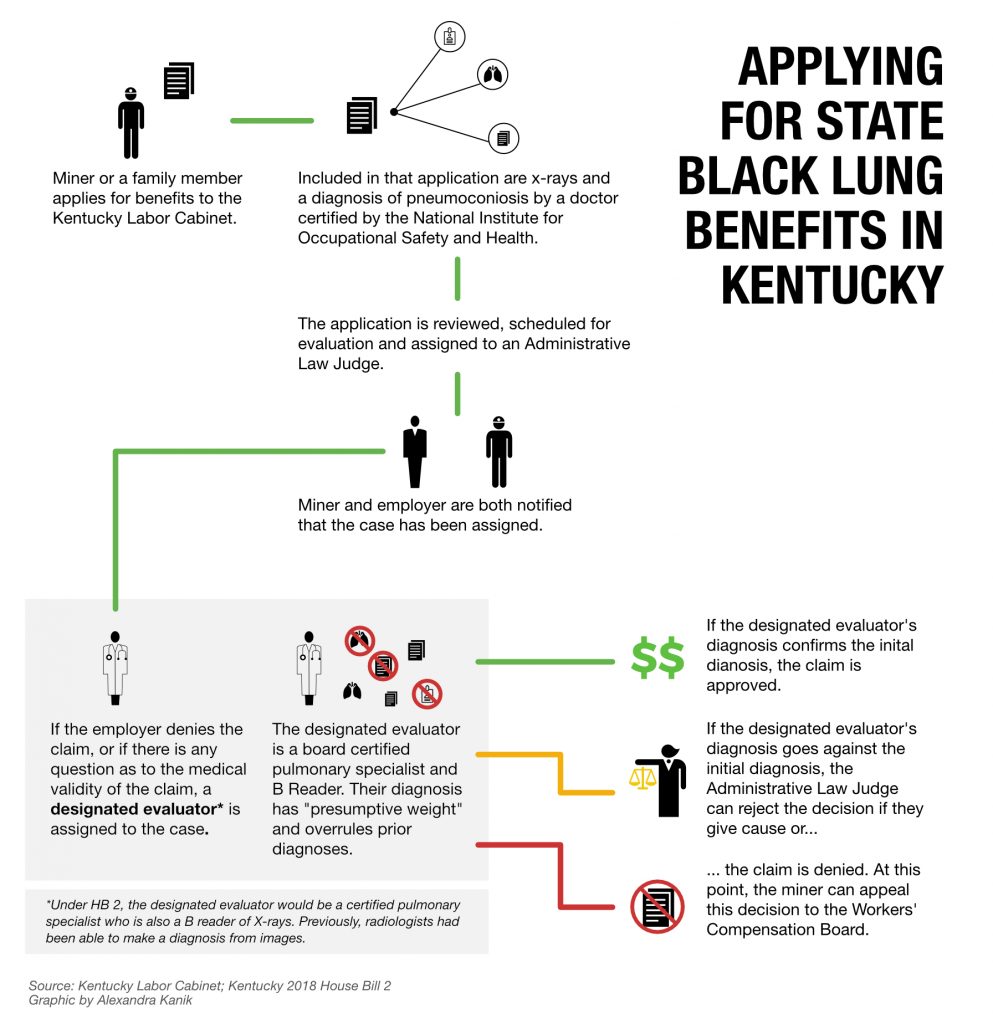 Givens is not alone in his concerns about the new law.

The American College of Radiologists, a professional organization representing radiologists, has asked Kentucky to repeal that portion of the new law. University of Illinois, Chicago, pulmonologist Dr. Robert Cohen told NPR that the Kentucky law change was “a disservice to miners.” He spoke on behalf of the American Thoracic Society, which represents pulmonologists and other health care providers focused on respiratory disease. And Bill Bruce, the executive director of the American College of Occupational and Environmental Medicine, which represents physicians who specialize in occupational illness, told NPR there was “no rationale” for the law’s changes.

The issue is more than a professional concern for him. His family has worked in the mines.

“My father-in-law, he can walk maybe 50 yards and you can hear him breathing 15 feet away,” he said. “He’s got 30 years in the underground mines. He doesn’t qualify for black lung benefits, which to me is crazy.”

Givens said miners should get tested for black lung every year, because the disease can progress in severity even after exposure to dust stops.

Givens said he has been asked to testify next month at a legislative hearing about the effects of Kentucky’s new law on black lung benefits.

As for the dusty conditions miners face, and the cheating that might be adding to the problems, U.S. Attorney Coleman said he hoped that the indictment sends a signal to the industry that coal mines that violate safety regulations in the future need to factor in the cost of prosecution.

The trial date has been set for October 3rd in Chief District Judge Joseph McKinley’s court in Owensboro, Kentucky. The eight defendants have been assigned an unsecured bond of $25,000 and instructed to avoid contact with any co-defendants or witnesses.

If convicted the former employees could face up to five years in federal prison, a $250,000 fine, and three years supervised release.

Prosecutors said they would not rule out the possibility of more indictments in the case.

Black Lung On The Rise