Talking Jobs with Ohio’s Next Governor | October 25 at 9 p.m.

Talking Jobs with Ohio’s Next Governor

Highlights from live forums featuring Ohio gubernatorial candidates Richard Cordray and Mike DeWine answering questions from young people about the future of jobs and education in Ohio. The forums were held and recorded at ideastream/WVIZ in Cleveland on October 4, 2018. 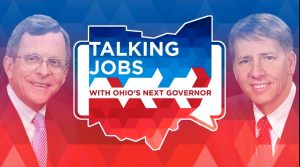 nd workers interacted live with the candidates by using social media and by engaging with the live streamed forum on Facebook, YouTube and ideastream.org/talkjobs.

Talking Jobs with Ohio’s Next Governor is funded by The Corporation for Public Broadcasting (CPB) through a grant for the American Graduate: Getting to Work initiative. American Graduate is public media’s long-term commitment to help young people succeed in school, career and life by supporting community-based solutions, including national and local reporting, town halls and public forums, like Talking Jobs.

During the forum, the candidates appeared individually in back-to-back segments and spend 45 minutes each interacting with young Ohioans by responding to their questions and comments about education, workforce development and job creation. Andy Chow of the Ohio Public Radio and Television Sta

tehouse News Bureau will served as the forum moderator.

Co-produced by a statewide public media collaborative of CET in Cincinnati, ideastream in Cleveland and WOSU Public Media in Columbus, Talking Jobs with Ohio’s Next Governor provided a rare opportunity for young adults across the state to engage with the leading candidates in this year’s Ohio gubernatorial race.