Wow! 2018 has come and gone, and it’s about time we reflect on our favorite sounds of the past year. Leading up through the end of the year, WOUB Culture will be spotlighting what various music-centric people throughout the region have been enjoying the most for the past 12 months. 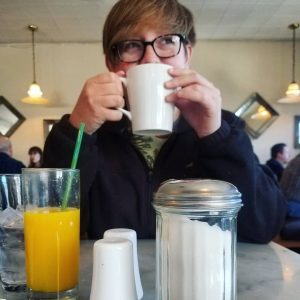 Susan Tebben is the News Assignment Editor and a reporter for WOUB News. She enjoys pastel colored vinyl records and tabby colored cats. In her younger days she dreamed of being a music critic, but the universe wanted her to be a court reporter. She sees the similarities between the two. Her top tunes are in no particular order, except the last one.

The Head and the Heart – Signs of Light

Studying for a Master’s degree and working in a very active newsroom both necessitate noise-cancelling headphones and music to get in the zone. I tend to pick more chill music when it comes to studying, and the music of The Lumineers, Greg Laswell, and The Head and the Heart basically gave me my success this semester. This album is their most recent, but still from 2016. It can’t beat 2011’s self-titled album (and not just because it was released on my birthday), but it is the low-fi feel I need when I need to focus.

Featured tracks: “All We Ever Knew”; “I Don’t Mind”

Game Music for Zelda: Breath of the Wild

Speaking of chill music, I lost a few months of my life playing this game on Nintendo Switch this year, and while noticing that this game was one of the most beautifully done open world games I’ve ever come across, I also noticed that the music was nothing short of symphonic. This game needed beautiful music to lower my blood pressure as bosses destroyed my weapons so easily you’d think they were made of straw. The music made for the Zelda series is so good, Nintendo released a five-disc soundtrack of Breath of the Wild in Japan, and one of my friends used a previous game’s soundtrack as the ceremonial music at her wedding. We’re a nerdy bunch.

Take one look at my apartment right now, and turn on my TV (which is set to Hallmark Channel Christmas movies), and you’ll know Christmas is all about the aesthetic for me. I love the traditions (including making new ones), and Chrissy Teigen and John Legend’s TV Christmas special was just the ticket this year. Plus, it was a shameless plug for his new album, which has some pretty amazing renditions of new and old songs to make everyone fluff their garland a little more this time of the year.

Featured tracks: “Have Yourself a Merry Little Christmas,” feat. Esperanza Spalding; “Wrap Me Up In Your Love”

My partner once asked me if I was a fan of Shawn Mendes, or if I was only saying I was to be hipster and ironic. Definitely not ironic (though maybe a little hipster). Mendes is what Justin Timberlake wishes he still was, with the swagger of George Michael in his heyday, wrapped up in a Youtube superstar who looks eerily similar to Buddy Holly without the glasses. I was an unashamed fan once I heard this album. The hooks are endless and there’s nothing about this album I dislike. As a woman who is stubbornly protective of the greatness that was ’90s pop, it is saying something when I call this one of the best pop albums I’ve ever heard.

Janelle Monae’s been on a lot of best-of albums this year, with good reason. As a musician, actress and activist, she’s been at the top of her game lately. I fell in love with her back during her ArchAndroid days, but her new album is bursting with talent and innovation. It makes me feel like I could change the world, too, even if I can’t rock the “pynk” pants.

Sam Beam is the mastermind and sole member of Iron and Wine, and has released album after album of folk music with some of the best lyrics and soulful instrumentation. Beast Epic is a different kind of greatness from Beam. It has the same drifting acoustic guitar lines, his wonderful singing voice and intricate storytelling, but this time it includes an element of whimsy and quirk that I’ve yet to see from Iron and Wine. When I saw him and his all-woman band perform earlier this year, it was a show that not only included his amazing music, but also an obstacle course of instruments. At one point the drummer was strumming bells, running a cello’s bow across the cymbals, and playing the spoons, all for one song. It’s a wonderland that shouldn’t be missed.

Every once in a while, music comes into your life that ends up being a soundtrack for you as you age, a landmark for life developments, and your longest relationship. Hanson is that for me. To celebrate 25 years as a band (yep), they recreated old songs and created new orchestral arrangements, under the direction of David Campbell (who has also done arrangements for Bob Dylan, Paul McCartney, Radiohead, and his son, Beck). The music comes to life again with the backing of strings and horns. One of my all-time favorite Hanson songs, “Breaktown,” finally finds its place out of the demo pile, and this is officially the album to play to instantly get me out of a bad mood.