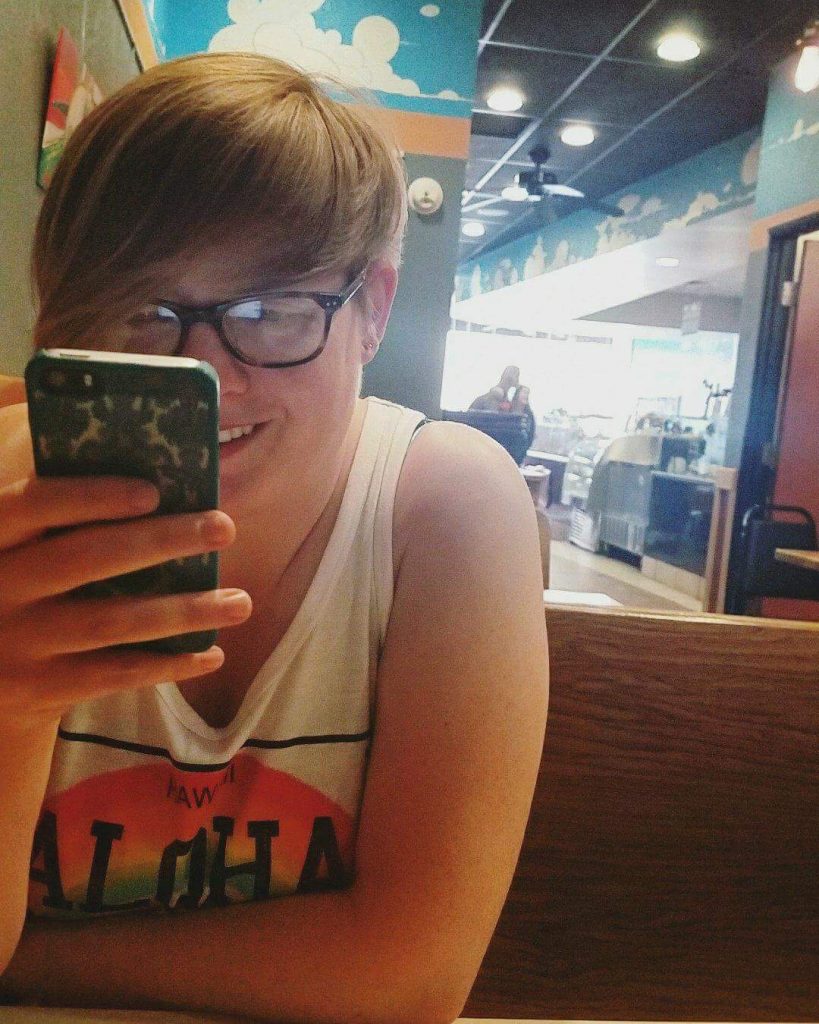 Since 2015, Susan Tebben has been the News Assignment Editor for WOUB News, though back in the old days, she fancied herself the next Lester Bangs. She’s sort of glad that didn’t happen, but remains an avid music fan while still reporting the daily news and afternoon newscasts.
—————————————————————————————–
1) “I Ain’t the Same,” from 2012’s Boys and Girls – Alabama Shakes
I have yet to find a moment when Alabama Shakes isn’t appropriate, but I needed a lot of pick-me-ups and fist-in-the-air songs this year, and the ragged, back-breaking shriek of lead singer Brittany Howard can cure for any doldrums. Their sound is just as raw as it was when I found them in 2012, and it reaches to a part of my soul that can only be accessed by true, killer rock music.
2) “Wild Child” from 2015’s Thunderbitch – Thunderbitch
Continuing the idolation of Brittany Howard, her solo work under the name “Thunderbitch” was nothing short of essential listening this year. It showed yet another side to her. Where Alabama Shakes is raw and gritty, Thunderbitch is energized and loose, with a touch of the old-time rock ‘n roll rhythms Chuck Berry would have drooled over.
3) “Angela” from 2016’s Cleopatra – The Lumineers
There’s just something so comforting and homey about The Lumineers, maybe because it’s a sound straight out of the Nelsonville Music Festival. They’ve been on my playlists for years, specifically when I need time to myself to focus or just escape the news. It’s brilliantly simple, and the piano piece at the end of this song is a lullaby for any broken soul.
4) “Defying Gravity” – From the musical “Wicked”
The musical has a timelessness in its theme and music. I’m a sucker for a Broadway musical and this one needs to be played over and over in this day and age.
5) “She Used to Be Mine” – Sara Bareilles (from the musical “Waitress”)
I’m behind on my musical theater, so I’m just catching this one this year, but this song spoke to me on a whole bunch of levels, as I started on some new adventures. For years I’ve argued that Sara Bareilles is one of the most underrated songwriters of her generation. This song, and the rest of the musical she composed, proves her mettle many times over, talking to the women who have had to take a few setbacks in life.
6) “John Wayne” from 2016’s Joanne – Lady Gaga
I don’t proclaim to be a big Lady Gaga fan. Correction, I didn’t, until Joanne. Her voice has always impressed me, but I was never impressed by the effects and production she put around it. This album is about as stripped down as Lady Gaga can get, and it feels authentic. I’m proud to have a vinyl copy of it for those days when I’m feeling hip and happening.
7) “Praying” fro 2017’s Rainbow – Kesha
If you haven’t heard about the things Kesha’s been through in the last few years, just look at the rest of the news coming out Hollywood right now. This was a mighty comeback for an artist who made her career on songs about much more superficial topics. The primal scream at the apex of the song says everything.
8) “Sweet Creature” from 2017’s Harry Styles – Harry Styles
Since the start of my musical collection in 1997, I’ve never hidden my love of boy bands. He’s a boy-bander for sure, but Styles’ solo work also evokes the singer-songwriter vibes that came out of the late-‘90s like Edwin McCain, Shawn Mullins and Duncan Sheik. Connections to Bowie might be a little far-fetched, but his album definitely has a depth Justin Timberlake never reached.
9) “Kissing Strangers” from 2017’s DNCE – DNCE
Speaking of solo boy-banders, Joe Jonas, of that band you might know if you’re still in college, Jonas Brothers, tried solo work. Then, thankfully, he went back to team work with an amazing female guitarist, a weirdo bassist and…the drummer for Jonas Brothers. OU’s Marching 110 has been known to play this song, which makes it all that much better.
10) “I Was Born” – Hanson
Remember that thing I said about my musical collection starting in 1997? Yeah, it was these guys. Eight albums and a greatest hits collection (plus the 10 shows I’ve been to) later, they’re still releasing new music, and I’m still a loyal fan. This is the new song attached to the greatest hits collection they released earlier this year, and it’s up there with some of their best music in the 25 years (yep) they’ve been a band. Their new Christmas album, Finally It’s Christmas, also released this year, should be in your stash of holiday hits as well. Trust me.
Top Tunes '17