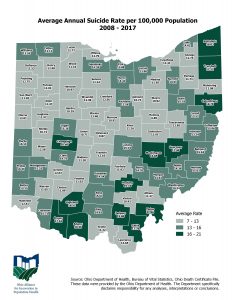 The study was conducted by Orman Hall, executive in residence for OU’s College of Health Sciences and Professions, and The Ohio Alliance for Innovation in Population Health. The analysis looked at ten years of data to “analyze the scope of suicide fatalities and to identify key demographic characteristics,” according to a press release by the university.

“The Alliance’s research indicates that the suicide rate within our state’s younger population (29 and younger) has increased by 33 percent since 2008,” said Rick Hodges, director of The Alliance, in the release.

The study also showed that firearms accounted for 50.9% of all suicide fatalities in the state between 2008 and 2018, and 15.8% were caused by “self-poisoning” or overdose.

Men had a higher average rate of suicide at 21.4 deaths compared to 5.36 for women.

“Local, state, and federal decisions and actions can reduce the growing number of Ohio suicides,” said Joan Englund, executive director of the Ohio Mental Health and Addiction Advocacy Coalition in the study announcement. “In order to help change the current upward trajectory, all Ohioans must have timely access to appropriate mental health and substance use disorder prevention, treatment and support services.”