Tiananmen: The People Versus the Party | Tuesday, June 25 at 9

TIANANMEN: THE PEOPLE VERSUS THE PARTY

Scheduled in Conjunction with the 30th Anniversary of the Tiananmen Square Massacre, the Documentary Tells the Story of the Pro-Democracy Movement and Demonstration That Ended With Brutal Violence and Set the Stage for Modern-Day China

On the night of June 4, 1989, Chinese troops entered Tiananmen Square in Beijing, violently crushing the largest pro-democracy demonstrations in the history of the Communist regime. Images from those final bloody days still resonate today and the death toll — from the official Chinese figure of 300 to estimates as high as 15,000 — continues to be disputed. Scheduled in conjunction with the 30th anniversary of the uprising, TIANANMEN: THE PEOPLE VERSUS THE PARTY is a day-by-day account of the dramatic seven weeks during which students and ordinary Chinese citizens made a stand for more freedom — a protest with ramifications that would shape the future of the modern superpower. Directed and co-written by Ian MacMillan, the film premieres Tuesday, June 25, 9:00-11:00 p.m. on PBS, PBS.org and the PBS Video App. 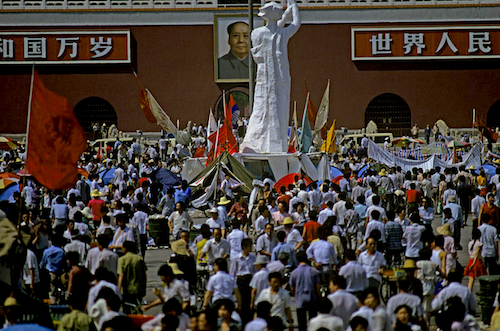 Unfolding with the drama of a political thriller, the film investigates how a peaceful student protest calling for liberty ended seven weeks later in carnage, documenting the many turning points when the violence could have been avoided but tragically was not. With never-before-seen Chinese television archival footage and exclusive interviews with key insiders — from protest leaders and students to politburo members — TIANANMEN: THE PEOPLE VERSUS THE PARTY reveals the scale of the 1989 protest, its aims, the military crackdown and the aftermath.

The in-depth research includes an exclusive, secretly filmed interview with a high ranking Communist Party insider who was an eyewitness to the inner debate within the halls of power that led to the massacre; extensive access to the documents known as The Tiananmen Papers, Chinese government and Party records revealing the decisions made by increasingly-panicked leaders; and gripping and emotional testimony from a diverse range of protesters, eyewitnesses and key contributors, several of whom were in the thick of the drama on the square throughout June 3 and 4 as the massacre unfolded.

Featured interviewees include Perry Link and Andrew Nathan, editors of The Tiananmen Papers, and student leaders Shen Tong, Wuer Kaixi, Wang Dan, Rose Tang and others. Through their testimony, the film reveals the complex story of those tumultuous seven weeks that became nothing less than the battle for the soul of a nation.

TIANANMEN: THE PEOPLE VERSUS THE PARTY is directed by Ian MacMillan and written by MacMillan and Audrey Maurion. The film is produced by Christophe Nick and Ed Stobart.

Ian MacMillan (Director/Co-Writer) is an award-winning filmmaker based in London, specializing in documentaries that reflect his passionate interest in culture and history. He most recently produced CIVILIZATIONS, the landmark nine-part survey of global art for PBS. He has been widely recognized as one of the leading filmmakers in his field, with a string of awards from the Royal Television Society in the UK, the Grierson Trust, and two BAFTAs (the UK equivalent of the Emmy Award).

Tiananmen: The People Versus the Party | Coming Tuesday at 9

Tiananmen: The People Versus The Party | Tonight at 9