Before NASA, These Daring Pre-Astronauts Had the Right Stuff 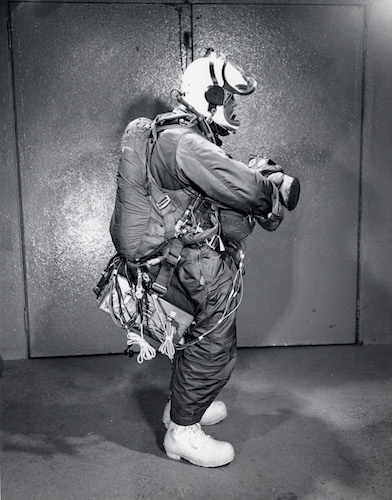 In the spring of 1959, NASA introduced Americans to a new kind of hero—the astronaut. But deep in the New Mexico desert, far from the Project Mercury spotlight, the Air Force would soon be launching a man towards the heavens. With a fraction of NASA’s budget and none of its renown, Project Excelsior would send Captain Joseph Kittinger 100,000 feet above Earth, lifted not by rocket, but by balloon. Though largely forgotten, this group of daring explorers would be the first to venture into the frozen vacuum on the edge of our world, testing the very limits of human physiology and ingenuity in this deadly realm. Written and directed by Amanda Pollak, produced by Pollak and Stephen Ives, and executive produced by Mark Samels, Space Men airs on American Experience Tuesday, July 9, 2019 at 9:00-10:00 p.m. on WOUB.

“These brave men were doing the cutting-edge work that would lead to the space program,” said Mark Samels, American Experience executive producer. “But unlike the space program that was to follow, the financing for these balloonists was miniscule. They had to cobble together equipment and a lot of it was homemade. These explorers—who put themselves in harm’s way as part of these experiments—were just filled with ingenuity and dedication and a tremendous amount of courage. And yet they were completely overshadowed by the astronauts who came right after them. Space Men is a way of bringing attention to these lesser-known heroes and giving them their rightful place in American history.” 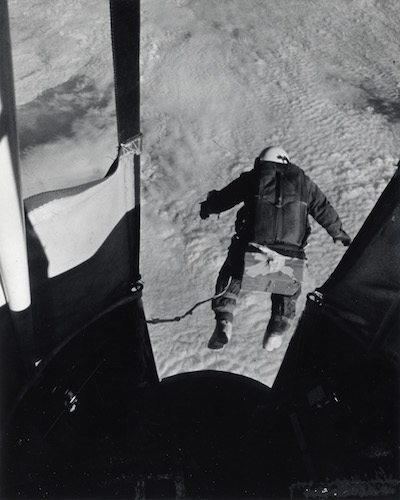 In the late 1940s, the notion of space travel remained squarely in the realm of science fiction. But a young Army doctor at Edwards Air Force Base, John Paul Stapp, had an entirely different view and began experiments on how g-force—intense acceleration and deceleration—affected the human body. To test this, he helped design a rocket sled powered by multiple engines that was stopped abruptly with a hydraulic brake. Over and over again, Stapp himself hurtled down the track. Then, in 1954, he boarded the sled for his most extreme ride. In a blaze of smoke and flames, the rocket shot Stapp down the track at over 600 miles per hour. When the sled hit the brake, Stapp’s body, traveling close to the speed of sound and withstanding nearly four tons of pressure, slammed into safety belts. His radical experiment had proven that a human could endure more than double the generally accepted g-force limit of the time. Time’s cover lionized him as “The Fastest Man on Earth.”

By the mid-1950s, Stapp turned his attention skyward, joining forces for Project Manhigh with colleague Dr. David Simons, who had also been working with balloon technology. In 1957, the project launched Simons to a record-breaking 101,000 feet in a pressurized gondola. After 32 hours, Simons returned to Earth, where he was celebrated on the cover of Life magazine and hailed by The New York Times as “The First Space Man.”

After a decade in which the U.S. and the Soviets had been vying for geopolitical dominance, Americans were caught completely off guard on October 4, 1957 when news broke that the Soviet Union had launched Sputnik nearly 140 miles above the earth. Suddenly putting a man in space became a national priority, and Project Manhigh received funding to develop rigorous physical and psychological tests. Before long the new National Aeronautics and Space Administration—NASA—began work on its own manned space program, Project Mercury, which seized the nation’s attention as well as all the funding. NASA asked Stapp for his assistance in selecting their first astronauts, and Stapp used his regimen of tests to help reduce the 69 candidates down to the world famous Mercury 7. 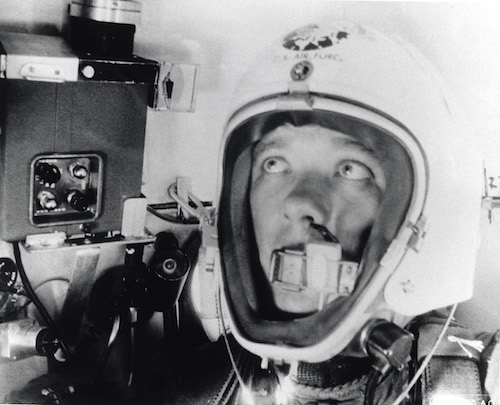 By the summer of 1960, Stapp was back at work with the Air Force on one last high-altitude balloon experiment. He named it Project Excelsior, Latin for “ever upward,” and brought in a daring young test pilot named Joseph Kittinger for the job. With the advent of rocket-powered jets, the need for an ejection system to allow pilots to bail out was essential. If a parachute opened too soon, the pilot would suffer a slow journey through the poisonous stratosphere. If it opened too late, the body would not withstand the force of spin during an extended free fall. On August 16, 1960, Kittinger lifted off. Within 90 minutes, he had reached 102,800 feet, breaking the altitude record set by Simons back in 1957. Kittinger looked up to the heavens. “Lord take care of me know,” he said, and jumped. By the time he touched down on the warm New Mexico sand, he had survived the longest free fall and the longest parachute jump in history—nearly 20 miles in 13 minutes and 45 seconds.

Less than a year later, Soviet astronaut Yuri Gagarin would become the first man in space. Eight years later, Neil Armstrong would walk on the moon. The age of manned ballooning had run its course, but the Mercury, Gemini, and Apollo space programs would owe a great deal to the ground-breaking efforts of Stapp and his small band of renegade explorers. “Sending people into the upper atmosphere on a large balloon doesn’t seem as incredible as leaving footprints on the moon,” says author Francis French. “But America may not have gotten to the moon if it wasn’t for pioneers like Stapp and Kittinger and Simons asking the questions that needed to be answered before we could get on with the business of flying in space.” 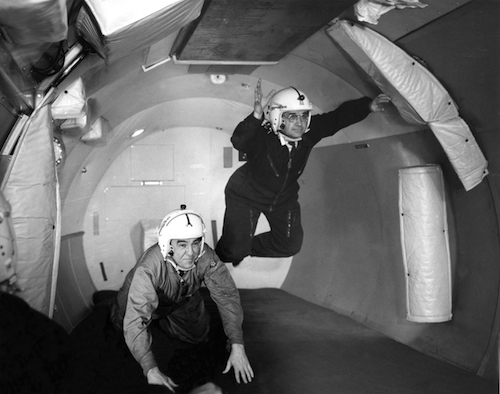 About the Participants, in alphabetical order

Burkhard Bilger is a staff writer at The New Yorker. His work has been anthologized three times in “The Best American Science and Nature Writing,” among other honors.

Francis French is the author of several books on aerospace history including Falling to Earth: An Apollo 15 Astronaut’s Journey to the Moon (with Al Worden, 2011), and two books co-written with Colin Burgess: Into That Silent Sea: Trailblazers of the Space Era, 1961-1965 (2007), and In the Shadow of the Moon: A Challenging Journey to Tranquility, 1965-1969 (2007).

Ken Hollings is a writer, lecturer and broadcaster, and is the author of several books, including Welcome to Mars: Fantasies of Science in the American Century 1947-1959 (2008).

Richard Holmes is the author of many books including Falling Upwards: How We Took to the Air (2013).

Gregory Kennedy is an aerospace historian whose books include Touching Space: The Story of Project Manhigh, Apollo to the Moon, First Men in Space, and The Rockets and Missiles of White Sands Proving Ground.

Dana Kilanowski is an award-winning historian, author, documentary filmmaker, and archaeologist with over 25 years experience writing and producing documentaries and books about test pilots and the history of flight-testing. She is the Historian of the Society of Experimental Test Pilots (SETP).

Col. Joseph Kittinger, United States Air Force, holds three world records for his time with Project Manhigh and Excelsior: the highest open-gondola balloon ascent, the longest free fall, and the longest parachute descent. Kittinger continued balloon-borne experiments for the Air Force until 1963, when he served in Vietnam, flying 483 missions during three combat tours. On May 21, 1972, four days before he was scheduled to come home, he was shot down over North Vietnam and spent eleven months as a prisoner of war. Kittinger retired from the Air Force in 1978, but continued to enter balloon competitions. In November 1983, he established a new world record by flying a helium balloon from Las Vegas to New York, covering 2000 miles in 72 hours. On September 18, 1984, he became the first person to fly solo in a balloon across the Atlantic Ocean, traveling from Caribou, Maine to Cairo Montenotte, Italy in four days, setting a record for both the longest balloon flight and a distance record for the type of balloon used.

Craig Ryan is the author of Sonic Wind: The Story of John Paul Stapp and How a Renegade Doctor Became the Fastest Man on Earth (2015), Magnificent Failure: Free Fall from the Edge of Space (2003), and The Pre-Astronauts: Manned Ballooning on the Threshold of Space (1995).

Mike Smith is the principal aerospace engineer for Aerostar International Inc. in Sulphur Springs, Texas. The author of numerous papers on the subject of stratospheric lighter-than-air system engineering, he is the curator of Aerostar’s extensive historical archive on stratospheric ballooning. He has been involved in the design of atmospheric balloon systems since the early 1980s and designed balloons for the Red Bull Stratos Mission and Google’s Project Loon.