At 1.9% Growth, The Economy Is Falling Short Of Trump’s Target

President Trump is counting on a strong economy to help him win reelection next year. But new numbers from the Commerce Department show the economy lost steam during the summer and early fall.

GDP — the broadest measure of economic activity — grew at an annual rate of just 1.9% during the third quarter. That’s a deceleration from the lackluster second quarter, when GDP grew at a 2% pace. At this point, it would take an economic miracle to achieve the 3.2% growth rate for the full year predicted in the president’s budget.

“Oh, we won’t get a 3-plus% growth rate for the year,” said Diane Swonk, chief economist at Grant Thornton. “That’s not going to happen.”

Third-quarter growth was hobbled in part by temporary factors including the strike at General Motors, which idled tens of thousands of workers during the last two weeks of September (the strike ended last week), and the continued grounding of Boeing’s 737 Max jets. 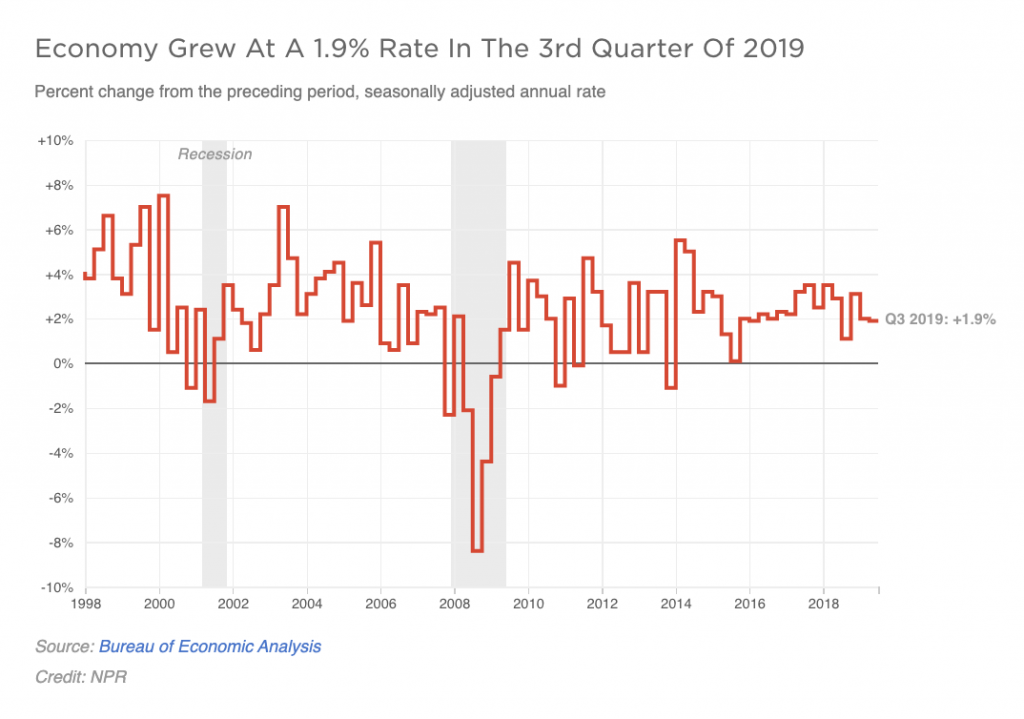 But the slowdown also reflects a steady decline in business investment. The GOP’s 2017 tax cut was supposed to promote a surge in business spending, and the White House promised that would supercharge economic growth. But many businesses have grown skittish in the face of weak demand overseas and the president’s trade war.

Trump and his allies have tried to pin blame for the slowdown on the Federal Reserve, which raised interest rates four times last year.

Lower borrowing costs have given a lift to the housing market, which made a positive contribution to GDP for the first time in seven quarters.

Consumer spending continued to grow in the third quarter, albeit at a slower pace than during the previous three months.

Despite the flashing warning signs of a slowdown, the president continues to boast about the economy, telling reporters during a Cabinet meeting last week that it’s his ticket to a second term.

” ‘It’s the economy, stupid,’ right?” said Trump, recalling the catchphrase from Bill Clinton’s successful 1992 campaign. “I have the strongest economy in the history of our country.”

To be sure, the nation’s unemployment rate is near a 50-year low. And the S&P 500 stock market index hit an all-time high on Monday.

“That’s not for rich people. That’s for everybody,” Trump told a cheering audience of law enforcement officials in Chicago.

Other presidents have been wary of hitching their political fortunes to something as volatile as the stock market. But Trump shows no such reservations.

“Of course he only focuses when the market is up,” said Mark Zandi, chief economist at Moody’s Analytics. “But nonetheless, he’s got his finger on something. The market matters a lot. It’s a real-time barometer of how the economy is doing, and people perceive it that way.”

Zandi and his colleagues are monitoring a handful of economic indicators — including the stock market, household income, unemployment and gasoline prices — in an effort to predict the outcome of next year’s presidential race. For now, their model shows the economy is working in Trump’s favor.

“If the economy is performing a year from now roughly like it is today, and his approval rating is roughly the same, and of course if turnout is typical, then given the economics, he will win,” Zandi said. “He will win the presidency in 2020.”

That could change, though, if the economic slowdown triggers a sustained drop in the stock market or a jump in unemployment.

A spike in voter turnout could also help Democrats — especially in the key battlegrounds of Michigan, Wisconsin and Pennsylvania. All three of those states have a lot of factories and farms — businesses in the crosshairs of the president’s trade war.

“Those are the industries that are actually suffering the most right now,” Zandi said. “So ironically, the president’s trade war is doing the most damage to the economies of those states that will matter most to his reelection bid.”

If Trump is paying attention to that, Zandi thinks the president will find a face-saving way to avoid escalating the trade war.

“If he decides to go down a different path, and allow [additional] tariff hikes to go into place, that will do a lot of damage to the economy, particularly in places like Iowa, Wisconsin, Pennsylvania, Michigan. And he will lose,” Zandi said.