Every year WOUB Culture spotlights what music-centric folks in the region have been listening to all year round right in time for the holidays in our annual Top Tunes feature. 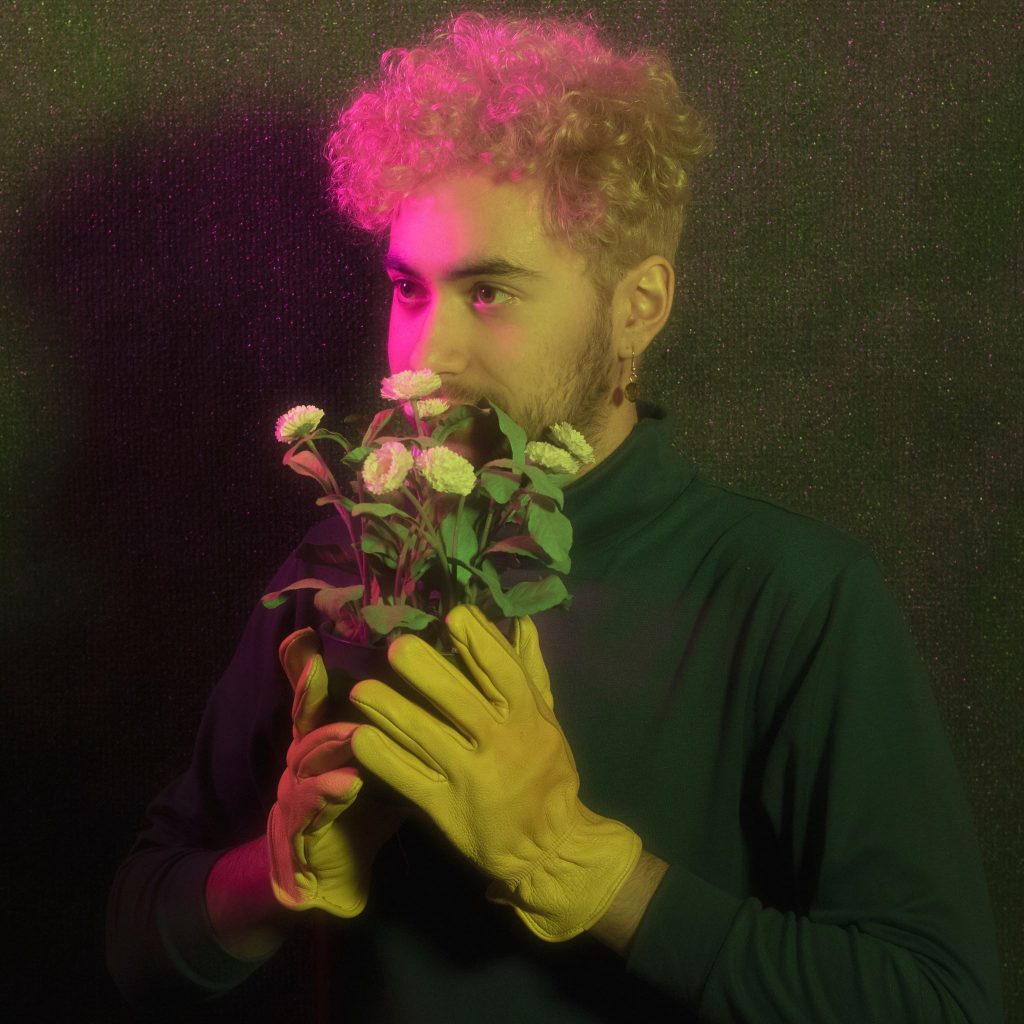 Dani Wasserman is a 23-year-old Athens local studying Integrated Media and Film at Ohio University. They have been active in the Athens music scene as an artist since 2018 with the bands Sweat Workers, and Takata Airbags, and solo project Glass Frawg.

This is my number one by a close margin. I first discovered Origami Angel thanks to my good friend Mitchell Sturkey who described them as something like “emo math rock band that sings about playing pokemon” And I was instantly intrigued, I have never seen another band this hot, goofy, and talented. I blasted their EP Gen 3 for months patiently awaiting their first full length release and when it dropped early last month I actually waited to listen to it, not wanting to get blasted by overblown expectations. So after giving it some time to breathe I dove in and was absolutely thrilled at the quality and caliber of music Origami Angel delivers. Their lyrics and delivery are heartfelt, catchy, and incredibly emotional without inducing the slightest cringe. Perhaps that’s because the real main event of Origami Angel is the lightning fast guitar work, riffs that breeze past you and twinkle like stars as they go. Suffice to say Origami Angel is blowing up fast and I couldn’t be happier for them.

St. Louis natives, my friends and I met Frankie Valet in Cincinnati while on tour last spring with our old band Sweat Workers. For us Frankie Valet felt like kindred souls, self described as noise-pop, on Stop Apologizing this exceptionally tight band presents a satisfying record of undeniably cute songs with high energy. Bouncing from angular post-punk vibes on the song “April”, to soft drifting slow-dances that remind me of watching “Twin Peaks” for the first time. All the while the bands sound is bathed in a hazy shoegaze atmosphere, and each song proves capable of packing punches, when Frankie Valet goes in, they go in hard. On top of the great record they’re also amazing live and tour pretty often so I highly recommend keeping an eye out for these folks.

Okay so I doubt there’s many people who will read this that don’t at least tangentially know Carter Hickman and his work but I just couldn’t leave him off this list. OU alumn and former guitarist of Athens’ own Burger Big, Carter took some time over the summer to craft an adorable little collection of ambient tracks. Everything about this release is absolutely precious. The bright illustrated cover art by Evan Virgin sets the tone for an optimistically relaxed record which knows well how to do more with less. I’m reminded of Blithe Field, or like a more cartoonish and lighthearted Boards of Canada. Stinkbug is relaxed and ambient but never boring, always sort of bouncing from one sonic space to another and often back again through a variety of eclectic samples and diverse instrumentation. Truly a treasure among Ohio music released this year.

Formerly of the indie band Chairlift, Caroline Polachek stunned the world this year when she released the music video for her lead single “Door” over the summer under her own name. Having adopted a newly constructed PC Music sparkle-goth revival aesthetic and the audio production to match, I was immediately thrilled for the eventual album release and with each additional single released that my excitement only grew. Not only was I just in love with her art direction and the unique sound Polachek and collaborators had crafted, but I was really thrilled by her lyrical work on this record. British label and collective PC music has always thrilled me with their production and unique aesthetic and approach to pop music, but aside from a few artists here and there (i.e. SOPHIE, Carly Rae Jepsen) I had always found their pop-star’s lyrical content to be a bit lacking. Not in a bad way,  (Charli XCX knows what she is, she’s never attested to be a poet more than a personality) But as a big fan of lyrical complexity and exploration of the form I was thrilled when I listened to Caroline’s new work and could really hear a human mind crafting poetry that struck an emotional chord with me. By far the songs “Ocean of Tears”, Produced by “PC” founders A.G. Cook and Danny L. Harle, and “So Hot You’re Hurting My Feelings” just paint such a vivid picture of a human being so torn by raw emotion and many of the challenges of being a thinking feeling person in a contemporary image obsessed culture.

I’m just gonna say it, I was late to the party with (Sandy)Alex G, I didn’t even consider listening to his extensive body of work until a friend and house mate of mine developed a strong affinity for the artist over the past summer. But upon diving in myself I was absolutely floored with what I found to be a complete mastery of the indie-folk-pop-rock genre. The three lead tracks for his most recent release “House of Sugar” just consumed my soul with their gorgeously simple compositions performed and produced with absolute technical expertise. My friends and I have simply referred to “Gretel” as the best song of the year in a matter of fact sense. But for me the real star of the record is “Hope” a sad heartfelt ballad about a friend who passed from a fentanyl overdose which fully communicates the sorrow and pain of loss, combined with a self-aware acknowledgment of the detachment fame and commercial success can create in such a situation, but also a strong desire to use his means to help out those close to him. The ballad ends abruptly after the line “you can write a check in my name, now Eddie take the money and run.”

This is an album unlike anything I had heard before and so far I have yet to find a comparable relative to it. This record gives me the feeling early on of floating on a small boat at sea, peacefully drifting along in a soundscape ocean of acoustic guitars, and soon plunging me beneath the surface into a stimulating cluttered coral reef ecosystem comprised of so many species of instrument and sound it’s hard to distinguish synth from acoustic, but all the while thick sweet bass lines bounce us along this oh so pleasant journey while gorgeous Korean vocal melodies I do not understand guide our trip. That is really the most I can say here. Everyone should listen to this album, nothing more.

7. Trying – Leave and Never Come Back

Listen to Trying listen to Trying listen to Trying!!!!! This was one of the best bands I met through the Ohio scene this year and quickly became one of my favorite artists just in general. First off Trying has to be the cutest band ever, from the name alone it’s genius, lead vocalist Cameron Carr starting off each gig announcing “Hi, we’re Trying” never ceases to get a laugh from the audience. But make no mistake this band is the farthest thing from gimmicky. Trying are trying and they are succeeding. They’re EPs “I won’t let you lose the rhythm” and “I just can’t feel the rhythm” knocked it out of the park and sit alongside some of the best indie pop music of this year for me. But I am just so endlessly in love with their first album “Leave and never com back” From soft spoken ballads sharing secret plans to move to New York, along with slick sad lines like “Nobody loves Halloween and Halloween and haunting me like you do” this record truly walked its way into my heart and is here to stay. Making this album one of the only CDs in my car brightened every single long car ride I took this year.

This past March music lovers everywhere felt the sting of tragedy ripple through their lives again with the tragic and shocking death of the young Liverpool pop duo Her’s. Vocalist and guitarist Stephen Fitzpatrick and bassist, Audun Laading were two of the most unique and promising voices in indie pop. The were really out there blazing the trail, you could tell there was something special about these boys, something really new and different. They were smooth, they were sexy, and they weren’t afraid to bear their souls in their work. All year, even before their tragic passing I was drawn again and again to their first full-length release, Her’s Songs. This album just pulls me along through its sweet simple melodies, the duo so in sync, telling tales of loss, lust, and shame. Raw honest songwriting wrapped up in perfected pop packaging that maintains its authenticity is a tough line to walk and Her’s could jump rope with that line. RIP Her’s.

9. no stars – Ripping off the Tags

I know this album has already made at least one WOUB top tunes list this year BUT I just could not bring myself to pass up the chance to talk about how much I love no stars. I remember watching Emma Schultz perform her first house show in Athens just a few years ago and ever since then I know I’m not alone in how much I wished no stars had recorded music out there. I can honestly say that this is one of the most worth the wait releases and one of the most earned as well. Emma has extraordinary talent at songwriting, painting narratives, and full color impressions of feeling in my mind as I listen to each track. The track “Evergreen” is such a perfect encapsulation of the record for me, the song is short, sweet, backed by a lonesome guitar melody, and constructed from every angle to make you feel each pang of hopeful pain of Emma’s wish to be immortalized as an evergreen tree, finally feeling acceptance as a small part of the life cycle of the earth.

It surprised me when I opened my spotify wrapped to find that John Maus was my most listened to artist of 2019. He isn’t my favorite, or my top choice, but I guess in a certain way it makes sense. Maus’ music was a fallback for me this year. Most of the albums on this list are fairly new, and with the exception of Her’s were all albums I listened to to some degree to fill myself with excitement and awe. But Maus’ work was the thing I just kept coming back to over and over, for comfort, and for safety. The way this academic approaches the genre of pop music sticks out to me in a special way. Maus often gets compared to his prolific friend and long-time collaborator Ariel Pink, and the comparison is apt, but where Pink goes big on the flashy aesthetic and hyperactive sound, Maus goes home, to sit in a dark room and brood and float through space on a ship of handmade synths and dense esoteric metaphors. Personally that’s just more my speed, and nothing else compares.