Watch The 8th Wonder: The Waterloo Wonders Free on YouTube This Week

Local documentaries will be released each Friday at 8 p.m. 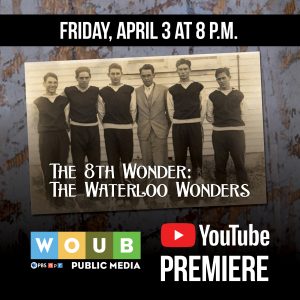 ATHENS, OH – WOUB Public Media will continue its YouTube release of locally-produced documentaries this week, as Ohioans are staying at home and following the directive of Ohio Governor Mike DeWine and Ohio Department of Health Director Doctor Amy Acton to fight the spread of COVID-19. In an ode to the loss of the NBA basketball season this year and the NCAA tournament, WOUB is releasing The 8th Wonder: The Waterloo Wonders on YouTube on April 3 at 8 p.m.

“The Waterloo Wonders was a small high school basketball team in Lawrence County during the Great Depression,” said WOUB Community Engagement Manager Cheri Russo who was the producer of the documentary. “They won back-to-back Class B state championships against all odds and provided much needed hope to the people of southern Ohio. In a time that we could all use a little hope, this seemed like the perfect story to share.”

The Wonders team consisted of five players who tied rags together to make a basketball and learned to play the game with a ball that wouldn’t bounce. What came out of this endeavor was a group of boys who learned how to pass the ball so proficiently that no opponent could stop them. Together, they made history. The hour-long documentary premiered in 2008.

“Many believe that the on-court antics of the Wonders were what lead to the start of the Harlem Globetrotters,” said Russo. “If you go to Waterloo today, you’ll find an Ohio historical marker commemorating the Wonders along with a town full of adoring fans. It’s hard to believe their story has lived on more than 85 years later.” Russo will be chatting live on YouTube during the premiere to answer questions and share more of this magical southern Ohio sports story with those watching.

Family members of the Wonders players and coach were interviewed for the documentary including former Ohio State, Gold Medal Olympian and NBA Basketball Player Bill Hosket.

Each week, WOUB plans to premiere one of its local documentaries on YouTube at 8 p.m. on Fridays to entertain and educate during these unprecedented times. The documentaries will remain posted on YouTube for one week after their release.

WOUB’s Our Town: Athens Available Free On YouTube for One Week