Remembering One of WOUB’s Own: Michael McCarthy

ATHENS, OH – When former Saturday Night Live (SNL) Writer Michael McCarthy, 61, passed away from cancer in early April, the comedy world reacted with great sadness. During his career, McCarthy performed alongside comedy rock stars like Steve Carell and Amy Sedaris. But celebrities weren’t the only one’s mourning. So were many former students who had volunteered at WOUB. McCarthy worked on WOUB FM’s radio comedy show Fox Paw (A Social Blunder) while he was a student at Ohio University in the late 1970s.

“Michael was a contributing writer and occasional performer on Fox Paw,” said Fellow Former Fox Paw Student Volunteer Steve Grisetti, who was also McCarthy’s roommate. “While everyone in our dorm was listening to rock and roll, we were listening to comedy records. Fox Paw was a great outlet for what he wanted to do with his life.”

“Michael was the friendliest guy and was incapable of being angry,” said Fox Paw Creator Robert G. Lee. “He liked to go for the big idea. Michael was very intellectual. He was a very smart man that loved a silly laugh. He liked to juxtapose something normal against a big political idea. Michael liked to use his comedy to fight the man.” 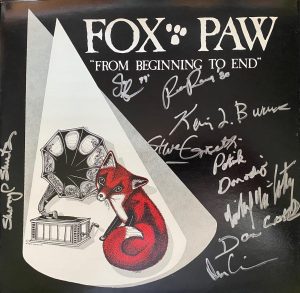 Fox Paw was broadcast on WOUB from 1977-1979. The program can claim the distinction of being the comedic career start for McCarthy and Lee, who is a warm-up comedian in Hollywood, and Nancy Cartwright (the voice of Bart Simpson). In addition to SNL, McCarthy went on to write for Gilmore Girls, Curb Your Enthusiasm, Whose Line Is It Anyway? and Sesame Street. McCarthy often performed in shows with the improvisational comedy group Second City in Chicago and was also a writing teacher at Second City, iO and DePaul University. His students included stars Tina Fey, Iron Man director Jon Favreau and Veep actor Matt Walsh.”

“Michael was inspired by his teachers at Ohio University. His heart was always toward teaching, and he was very successful at it,” said Grisetti.

McCarthy returned to Ohio University in 2011 for a Fox Paw reunion and led a workshop about writing a Saturday Night Live sketch packet for students.

“When you think back on things you did in college, it was great to know it still mattered. Not only did people remember us, it meant a lot to all the people involved, including Michael,” said Grisetti.

“Michael had a great time at the reunion. We all did,” said Lee. “Fox Paw, WOUB and Ohio University was really the launching pad for all of us to know that we could actually do this. WOUB gave us the freedom to put on whatever we wanted to put on. They were very open and free within the boundaries. I give all the credit to Ohio University and WOUB for letting creativity blossom on campus.”

Lee and Grisetti are now holding on to the memories they made at the reunion and in college with McCarthy.

“Michael and I were best friends in college,” said Grisetti. “I really feel like a part of my youth is not here anymore, and that’s a strange feeling.”

“Losing Michael was like smack in the gut,” said Lee. “It’s a very strange thing to have a friend pass away. It was the closing of a chapter that really put me in melancholy mood. I listened to old Fox Paw shows and albums to remember him.”