Examine the Rise and Infectious Spread of Antisemitism in the U.S; Tuesday, May 26 at 9 pm

Examine the Rise and Infectious Spread of Antisemitism in the U.S. and Europe in a Powerful New Documentary

VIRAL: ANTISEMITISM IN FOUR MUTATIONS
Premieres Tuesday, May 26 at 9:00 p.m. on PBS

Mass murders, vandalism, social media abuse, propaganda, assault – by virtually every yardstick, antisemitism in the U.S. and Europe is rising and worsening 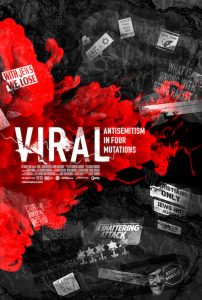 in ways not seen since the 1930s. Like a virus, it mutates and evolves across cultures, borders and ideologies, making it all but impossible to stop. Filmmaker Andrew Goldberg explores its infectious behavior in his film VIRAL: ANTISEMITISM IN FOUR MUTATIONS premiering Tuesday, May 26, 2020 at 9:00 p.m. on PBS.

Written, produced and directed by Goldberg, and produced and edited by Diana Robinson, the 90-minute documentary – which had a short theatrical release earlier this year – visits four countries to speak first hand with victims, witnesses and anti-Semites. Interviewees include: Fomer US President Bill Clinton, Former UK Prime Minister, Tony Blair, Journalists Fareed Zakaria and George Will, and Professor Deborah Lipstadt. The film is narrated in part by Julianna Margulies.

VIRAL: ANTISEMITISM IN FOUR MUTATIONS examines the mass shooting at the Tree of Life Synagogue in Pittsburgh and the rise of anti-semitism on the far right. In Hungary, it looks at how Prime Minister Viktor Orbán launched a massive campaign reminiscent of Nazi propaganda against Jewish billionaire George Soros. In England, members of the traditionally anti-racist, far-left Labour party conflate Israel and Jews with antisemitic vitriol, causing tremendous pain for the Jewish community. And in France, the film illuminates the seemingly endless wave of violence against Jews by Islamists and radicals.

The increasing bigotry and, at times, violence within each of these four countries paints a terrifying portrait of how global hatred disseminates and harms. As activist Maajid Nawaz says in the film, “If we don’t draw a red line in the sand when it comes to antisemitism, Muslims will be next, gays will be next and everyone else who is deemed a minority will be next.”

With a career spanning more than 20 years, Emmy Award-winning investigative producer/director Andrew Goldberg has executive produced and directed 13 primetime documentary specials for PBS and public television. He has also produced numerous long and short-form segments for outlets, including CBS News Sunday Morning, ABC News, and National Public Radio. Goldberg has been honored with over 20 major awards, including five CINE Golden Eagles, 10 Telly Awards, a NY Festivals World Medal, The Genesis Award (Guest of Honor), The St. Vartan’s Award, The Joachim and Anne Humanitarian Award. Some of his previous films include The Armenian Genocide, Jerusalem: Center of the World and They Came to America.

Award-Winning Documentary “FOR SAMA” to Premiere on FRONTLINE | Tuesday, November 19 at 10