LANCASTER, Ohio (WOUB) —The State of Ohio is now offering free COVID-19 testing for individuals, even if they don’t have symptoms or a referral from a doctor.

According to Ohio Department of Health these testing opportunities are in response to the report released by the state’s  Minority Health Strike Force regarding testing access in communities of color and in other high-risk or underserved regions.

Several tents were set up to allow staff from the Fairfield Community Center, the National Guard, and the local Department of Health to conduct the nasal swabs. All of the staff wore personal protective equipment like masks, face shields, gowns and gloves.

According to Kochis, more than 400 people were tested within seven hours. Most of the participants were senior citizens, one of the high-risk groups for COVID-19’s worst outcomes.

An older man, who preferred to remain anonymous, stopped by after his son told him about the free tests. He wasn’t feeling sick and didn’t have any pre-existing illnesses but he just wanted to “make sure” and was pleased he did not need a doctor’s order.  “I like it. It should’ve been like this when it (COVID-19) first started.”

A couple in their twenties, Madison Conrad and Taylor Ball drove in to get tested together. “We came here because she has a client that she deals with that just tested positive for it,” said Ball.

Madison is an esthetician and said her last client tested positive about a week ago and she wants to make sure before taking more clients.

“I think it’s really nice because a lot of places you have to either have a fever or have traveled internationally recently so it’s nice that you can just come here even if you just have a suspicion that you might have it.”

A woman in her fifties – who preferred not to share her name- said she wanted to get tested because she is a respirator specialist who works with ventilators.

“I work in a local hospital and I’ve been taking care of COVID-19 patients, so I was just curious if I had COVID-19.” Since she did not have any symptoms she has not been tested in her workplace.

A mother and her son said they had tested positive last month and wanted to know if they were cured so they are cleared to get back to work, as the pandemic has strained their incomes.

“We tested positive on the 7th of May. We want to get tested so we can go back to work at the nursing home in Canal Winchester.”

A young man said he read about the pop-up testing on Facebook and said although he’s healthy, he wants to be safe “I have a family member who’s at high risk and I work in a restaurant, so I’m just trying to make sure.”

The nasal swabs are said to be uncomfortable because a swab is inserted deep inside each nasal cavity. The tests will be sent out to the Department of Health laboratory in Columbus for processing and people should have the results in one to three days.

For detailed information on upcoming pop-up testing sites you can visit the DOH’s web page. . 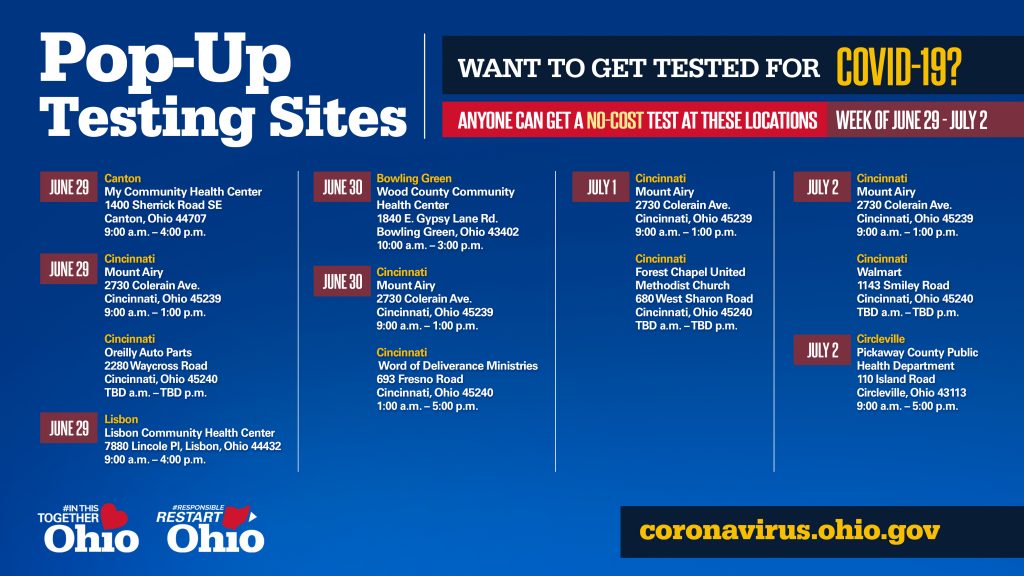 You can also see the map with all the Ohio testing sites, here.