The Osborns in Zanesville participated as a family

ATHENS, OH – To say Joey Osborn of Zanesville has her hands full is an understatement. Osborn is the mother of five children, ages 3.5 to 7, and there are two sets of twins!  So, in this time of COVID-19, she must find unique and interesting ways to keep her children entertained. That’s where the WOUB Virtual Scavenger Hunt came in handy. 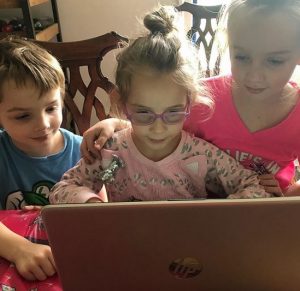 “We all loved it. We’ve been doing school online since March and we needed something different that the kids would be excited to participate in,” said Osborn. “It was nice to have them watch the videos and program because they got to play on the computer, but they were also learning something. And they didn’t really know it. It was a win-win.”

WOUB Public Media’s Learning Lab teamed up with the Muskingum County Library System to offer a virtual scavenger hunt for the library’s summer reading program this year. The four-part adventure was based on the PBS Kids series Xavier Riddle and the Secret Museum. WOUB Educational Services Manager Deborah Brewer says the series introduces kids to inspiring historical figures and helps them learn about the character virtues that helped them succeed.

“We enjoyed learning about real people. We could even go online and look up more information,” said Osborn.

Based on the children’s book series Ordinary People Change the World by New York Times bestselling author Brad Meltzer and illustrator Christopher Eliopoulos, the Xavier Riddle series follows the adventures of Xavier Riddle, his sister Yadina and their friend Brad. In each episode, the three face a problem and must turn to the Secret Museum to help them solve it. The Secret Museum allows the three friends to travel back in time to meet real-life historical figures when they were children. 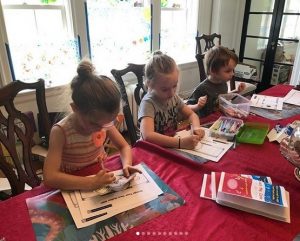 The Learning Lab’s Lori Pringle put together the website where children would follow directions and answer questions to go on the virtual adventure.

As the Osborn kids learned about different historical figures, they conducted several activities at home. When they learned about George Washington Carver on the scavenger hunt, the children helped their mom plant garden, and they went on a walk to pick up trash around their neighborhood.

“During Week 3 of the scavenger hunt, we learned about Jackie Robinson. That was around the same time that the Black Lives Matter protests started throughout the country,” said Osborn. “It really gave me an easy way to talk to my kids about what was going on in the news.”

Osborn says one of the lessons made a huge difference for one of her daughters. The six-year old has ADHD and some sight issues. When they learned about Leonardo da Vinci on the scavenger hunt, it opened her world.

“She deals with emotions that are bigger than her with art, and when we watched the videos of making art, she fell in love with that,” said Osborn. “It fascinated her that art can be made from anything. Now she is having me save milk jug caps and cereal boxes because she may be able to make something out of that.”

Osborn was thankful that her children could participate in something like this during a time when many activities for kids have been cancelled.

“We had a ball,” said Osborn. “It gave us a good opportunity to do things together as a family.”

Although prizes are no longer being distributed for participation, the scavenger hunt is still online for family enjoyment. You can find it on the WOUB Learning Lab website at learninglab.woub.org