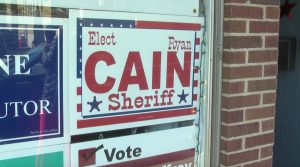 Following the retirement of Sheriff Shawn Justice, Ryan Cain defeated Matt Knight in the primary election and will take over as the new sheriff of Vinton County.

Cain, who has been with the department for 17 years, said Vinton County is one of the best places to learn every aspect of law enforcement. He began as a sergeant, then was promoted to lieutenant and now he is taking on the role sheriff. He said he is ready to begin working on projects to expand the office.

Cain said his highest priority will be creating more jail space. He said this is an issue throughout the state of Ohio because more people are committing arrestable offenses. He said there is not enough space for those who commit drug offenses and  he said almost every call they go on is drug related.

“We’re doing the community no service by allowing people to go free and some of them it’s a quarter of the time they would be if we had the space,” he said.

He said he is also working on an impound lot that will prevent towing companies from profiting off of every tow but will instead be a resource to the department.

Cain said he wants every deputy to be an extension of himself. He said this will happen through policy changes and more training leading to more convictions.

But Cain will not be alone as he tackles this new role. He will have the help of retired Sheriff Shawn Justice who said he will stick around for a year to help train and go out on a good note.

Justice said he was not surprised about Cain’s win in the primary election. Justice spoke very highly of Cain saying he cares about making sure the people of Vinton County are safe.