‘Making a Living With Hot Steel, An Anvil, and a Hammer’: Speaking With Southeast Ohio Artisan Marc Setzer

< < Back to
WOUB Digital · ‘Making a Living With Hot Steel, An Anvil, and a Hammer’: Southeast Ohio Artisan Marc Setzer

Metalsmithing is one of the oldest trades known to man, and highly skilled artisans all over the world still practice the ancient art. Marc Setzer, owner and head blacksmith of Setzer Forge, a custom blacksmithing and farrier service in Langsville, OH, is one such regional artisan. Setzer has been a blacksmith for 18 years, and a full-time farrier for 15, and has appeared twice on the History Channel’s Forged in Fire.

On Saturday, February 27 at 11 a.m. and 9:30 p.m. ET, WOUB-TV will broadcast Urban Forge: Ozark Artistry, a program that examines the fascinating world of metalsmithing in the 21st century from the perspective of Urban Forge, a metalsmithing business located in Mountain View, AK. 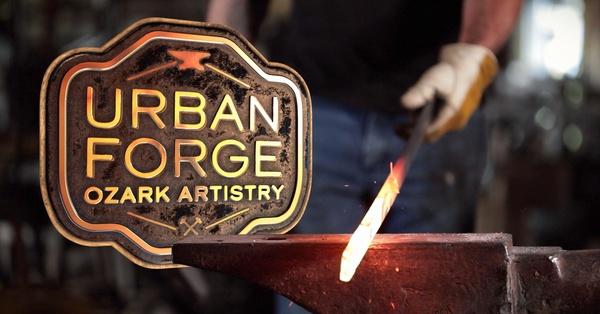 “My great-grandfather was a full-time blacksmith in the town of Leipsic, OH. He was the town blacksmith and he fixed wagon wheels and ploughshares and anything that really needed done. I grew up listening to the stories about his shop and when I was old enough, I was gifted his blacksmithing hammer and horseshoeing cameras and a couple of the little tools and really got me interested in it,” said Setzer, who expanded his skills by working for the Toledo Metroparks in Northwest Ohio as the blacksmith in a living history town. “It was my job to take care of the mules for their canal boat ride, and on the days where it was raining too hard for us to take people out on the canal boat, I would go in and work with the blacksmiths; and that’s where I kind of got my start in doing decorative and tool blacksmithing work.”

Setzer’s job for the Toledo Metroparks was to maintain the historic ‘you-just-went-backwards-in-time’ feel for those visiting the park, which isn’t too tall of an order when one is referring to the ancient art of metalsmithing, which has been an integral part of human settlements for thousands of years.

“The techniques haven’t really changed that much for farriers except for the introduction of modern veterinary medicine practices, which help us do a better job. As for the blacksmithing, nothing has really changed in hundreds of years because you’re still heating up steel and smacking it with a hammer until it takes on the shape that you want it to be in. The only major difference is the quality of the steel and the other metals that we get to use, and the power tools we have access to now, but the process is still very much the same,” said Setzer.

Setzer Forge provides corrective and therapeutic shoeing and trimming for all types of equine animals, from zebras to 4-H horses. In addition to the farrier work Setzer does, he also has crafts various hunting knives, historically accurate knives for historical reenactors, and he even rendered a new metal clapper for the victory at Alexander Elementary after the original clapper was stolen.

“Any civilization out of the stone age would have needed some sort of blacksmith like person for everything from their weapons to their armor to their day-to-day cooking needs. A gentleman that I took classes from years and years ago used to tell me that the blacksmith is actually the ‘king of all trades,’ because a woodworker wouldn’t be able to do such a good job without his chisels and his files, all things that are made by a blacksmith,” said Setzer. “And even if you look at your own home and count how many nails are in your furniture, in the walls and the in construction — even less than a hundred years ago, all of those nails were made by hand by a blacksmith, and nobody would consider that unless you really got into it. If it wasn’t for mass production, blacksmiths would still be absolutely vital for just even our day to day stuff.”

While the rise of mass production may have moved the trade out of the field of awareness of the average middle class American, Setzer said that he doesn’t get too scared about the threat mass production eliminating the need for his services simply because of the enduring quality of the products that can be made by metalsmiths, but not mass produced by machines.

“I realized that in order to price my goods in a way that made it even remotely worth my time to make them, I needed to charge probably two or three times as much as what you could get a similar item for at Walmart,” said Setzer. “But, I’ve got a camping tripod that I’ve had for 15 years that I made at the Toledo Metroparks, It, there’s not a spot rust on it! It’s still completely fully functional. And if you were to buy something similar from Walmart; it’s all mass produced and quickly made in a machine shop and they don’t hold up nearly as well. Similarly, to someone who’s just a hobby outdoorsman a mass produced knife is fine. It’s made of decent enough quality steel, but it doesn’t hold an edge as long, and it doesn’t take abuse as well as the knives I make. Even though they’re three times as expensive, I guarantee all of my knives. If you do somehow manage to break one of my knives, my only requirement is you tell me how you did it, because I’m sure it’s gotta be a good story. And if it’s a good enough story, I’ll replace it pretty quick.”

Setzer said that one of the most unique aspects of the metalsmithing world is the tight bond that everyone who practices the trade feels with their fellow tradespeople.

“I know that I could contact any of my instructors from Hocking College today and they would help me however they could. If I run into a situation where I desperately need help, I could contact the guy that I apprenticed under, or really any of the other farriers in this area that I know. Yes, I technically compete with them for business, but I can get their help at any time and vice versa,” said Setzer. “If you make a living with hot steel and an anvil and a hammer it’s almost ingrained in you to help other people do the same.”